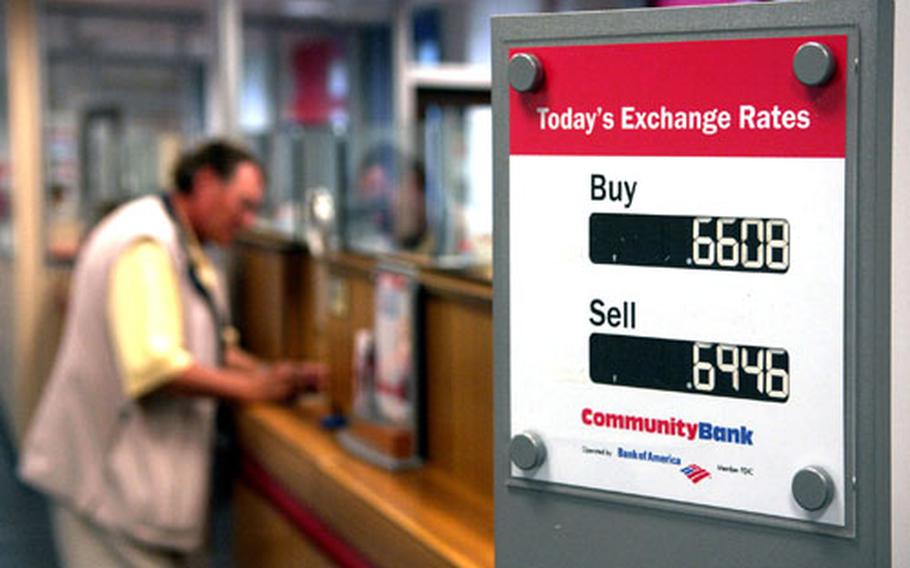 The strengthening dollar has dropped COLA six points and post allowance 10 points. That translates to about $150 a month for troops and $200 for civilians. (Ben Bloker / S&S)

Forced down by the stronger dollar, cost-of-living allowances for military personnel and post allowances for civilians stationed in most of Europe dropped sharply over the Labor Day weekend.

For mid-ranking servicemembers, the drop is likely to mean anywhere from about $80 to $150 less in COLA this month than last, depending on location. Most civilians in roughly the same pay range can expect anywhere from $85 to $170 less in post allowance for the month.

Troop COLA fell nearly 15 percent Monday in most of Germany, while civilian post allowances in the country dropped at least 16 percent Sunday. Troops in Portugal&#8217;s Azores saw their COLA drop more than 23 percent, while civilian personnel there saw no change.

Post allowance rates at bases in the United Kingdom also fell more than 14 percent, changing for the first time in more than 18 months after the British pound fell to rates not seen since early 2006. Troop COLA in the U.K. dived more than 11 percent, falling for the second time in two months as the pound exchange rate used by the Per Diem Travel and Transportation Allowance committee plunged more than 11 cents.

Elsewhere, it was the dollar&#8217;s strength against the euro that dragged allowance rates down. The Per Diem Committee improved the euro exchange rate it uses to calculate COLA and overseas housing allowance from about $1.613 to roughly $1.481 &#8212; an improvement that sent allowances tumbling.

In Italy and Germany, the cut means an E-6 with two dependents can expect to receive about $170 less in COLA this month compared to last. Troops stationed at Garmisch-Partenkirchen will notice an even bigger COLA reduction.

If the strong dollar trend continues, allowances could deteriorate further to make up for American currency&#8217;s increased buying power.

The dollar continued to strengthen against European currencies Tuesday, trading below $1.45 per euro for the fist time since the first half of February. The British pound fell below $1.79 in early trading Tuesday, its weakest performance against the dollar since April 2006.

"There is optimism about the U.S. economy," Lutz Karpowitz, a currency strategist at Commerzbank AG, a major German lender, told financial news service Bloomberg on Tuesday. "Right now it looks like dollar strength is going to continue."

For the new COLA and housing rates, troops can visit the Per Diem Committee Web site at: http://perdiem.hqda.pentagon.mil/perdiem/.

For the new post allowance rates, visit the State Department&#8217;s site at: http://aoprals.state.gov/content.asp?content_id=184&menu_id=78.