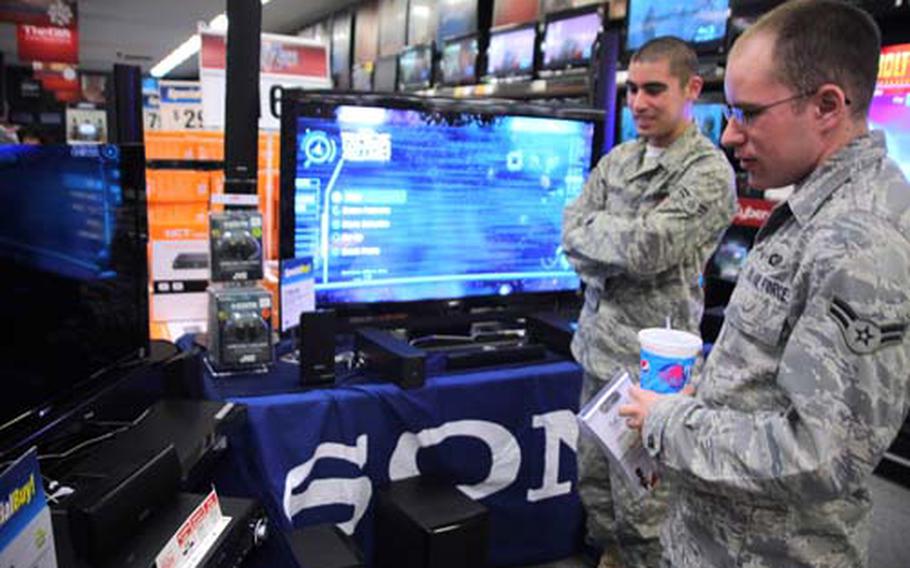 Airman 1st Class Kevin Cerven and Airman 1st Class Barry McCool, of the 374th Communications Squadron, check out new televisions at the Yokota Base Exchange on Tuesday. Servicemembers and their families say that with yen rates recently reaching 14-year highs, they are shopping for more holiday gifts online and on base. The Bank of Japan took measures to weaken the yen Tuesday, but currency traders reacted tepidly shortly afterward. (Grant Okubo / S&S)

YOKOSUKA NAVAL BASE, Japan &#8212; As servicemembers purchase off-base holiday gifts at the worst exchange rates in 14 years, Japan&#8217;s government took a step to rein in its strong currency Tuesday.

However, whether the Bank of Japan&#8217;s action was enough to weaken the yen against the dollar will ultimately be decided by the market. The early results aren&#8217;t especially promising.

In an emergency meeting Tuesday, the Bank of Japan said it would offer 10 trillion yen (about $115.8 billion) in short-term loans to commercial banks, according to The Associated Press.

Currency traders seemed unimpressed by the emergency meeting, selling just enough yen to drop the rate from 86.11 yen per dollar Tuesday morning to an ask price of 86.97 yen by 5 p.m. that afternoon. Since April the yen has gained 14 percent against the dollar and has spiked in the past few weeks.

&#8220;The weak dollar trend stems from structural problems, therefore the current situation of the mid-80-yen levels will continue for a while,&#8221; said Koji Takeuchi, senior economist at Mizuho Research Institute in Tokyo, in an interview with Stars and Stripes.

However, economists attribute the current rate more to the dollar&#8217;s weakness than any inherent Japanese strength.

But he has been criticized for his stance by Japan&#8217;s largest companies, who find it harder to sell cars, electronics and other popular goods in the U.S. and abroad at the higher prices a strong yen requires.

Far from the talk of monetary instruments and currency intervention, however, Tamsen Velazquez would just like to buy a few presents at a decent price.

Velazquez is doing most of her holiday shopping online, as are Petty Officer 1st Class Aaron Lopez and his wife, Melanie, for their three children.

The couple says they limit most of their spending outside Yokosuka Naval Base to smaller items like sushi and local beverages.

Servicemembers usually receive more money in their cost-of-living-allowance adjustments when currency rates strengthen against the dollar. However, the paycheck boost they might have received appears to have been canceled out by Japanese deflation.

COLAs were scheduled to steadily drop with each paycheck beginning in October after a Defense Department retail pricing survey determined that prices for goods and services in Japan had fallen when compared to the same goods in the United States.

Instead, COLA has remained unchanged in much of mainland Japan since a large drop Oct. 16. Servicemembers on Okinawa will receive marginally less during the Dec. 1-15 pay period than they did in November, when COLA did not change.

Elsewhere in the Pacific, the Korean won has also strengthened considerably against the dollar this year, finishing at 1,161 to the dollar Tuesday.

Stars and Stripes reporters Chiyomi Sumida and Grant Okubo contributed to this story.