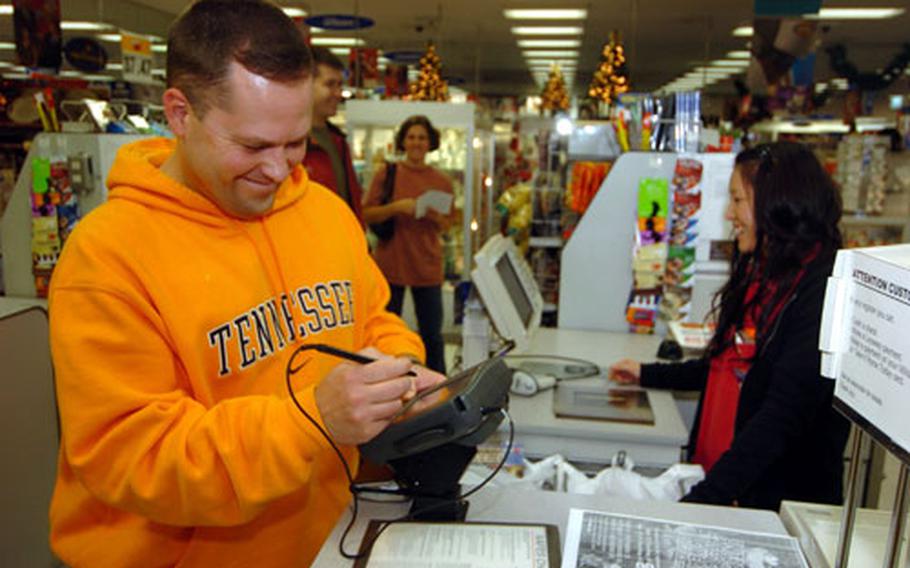 Holiday shopping for servicemembers in Japan is a little harder this year because the dollar&#39;s value has dropped against the yen. On Friday, Capt. William Carpenter chose to shop at the Post Exchange at Camp Zama. Other servicemembers said they feel a crunch this year because their cost-of-living allowance hasn&#39;t changed to reflect the weaker dollar. (Christopher B. Stoltz / S&S)

Servicemembers in Japan will see a steady or slightly lower cost-of-living allowance in their paychecks this week, despite the dollar&#8217;s fall to 2&#189;-year low Wednesday against the yen, according to military finance officials.

The stagnant COLA rate comes after servicemembers in Japan enjoyed a more favorable exchange rate this spring and summer, according to Chief Petty Officer John Valentin, the leading chief petty officer for military pay at Personnel Support Detachment at Yokosuka Naval Base.

For much of the year, a dollar bought at least 116 yen and often bought as much as 120 yen or more.

To counter those richer days earlier this year, the Pentagon already had scaled back COLA rates to some servicemembers in Japan in October.

But as of Wednesday, a dollar bought only 108.5 yen, according to the Federal Reserve Board&#8217;s Web site. The last time the dollar fell lower was in June 2005.

Still, in next week&#8217;s paycheck, servicemembers at Naval Air Facility Atsugi and Yokosuka will see a slight decrease of a dollar or two each day, according to Valentin and a Pentagon Web site.

The Pentagon is scheduled to review the COLA rates on Tuesday, Valentin said. He believes officials will begin to increase rates to make up for the dollar&#8217;s recent decline.

But those increases, if approved, will take time to show up in paychecks, Valentin said. The earliest increase would likely come in January, he added.

That slow turnaround means belt-tightening in the midst of holiday spending and $3-a-gallon gas prices, some servicemembers say.

In Sasebo, Petty Officer 1st Class Michael Cook said living expenses in Japan&#8217;s neighborhoods, called chos, are exorbitant and hard to keep up with as the dollar falls.

COLA is meant to balance the value of servicemembers&#8217; dollars on base with the foreign currency and costs off base.

Evening out those costs, however, doesn&#8217;t work as quickly as some would like.

Petty Officer 2nd Class Zenaida Desiderio lives about 20 minutes from Sasebo Naval Base and says shopping on base is not always an option.

That means Desiderio must spend more money to get less while shopping at the Japanese stores in her neighborhood. She said the reduced buying power cuts into her budget for groceries and other everyday necessities.

Marshall, of the 5th Air Force at Yokota Air Base, Japan, said his family has learned not to count on COLA for necessities. He and wife Brandy have two small children.

The allowance&#8217;s flat rate at the moment also won&#8217;t affect their holiday shopping plans, he added.

Sgt. 1st Class Steven Landon, also with the 1st Battalion, 1st Air Defense Artillery at Kadena, lives off base but said the dollar&#8217;s poor performance hasn&#8217;t affected him as a single person.

To check individual per diem rates, go to: http://perdiem.hqda.pentagon.mil/perdiem/ocform.html.