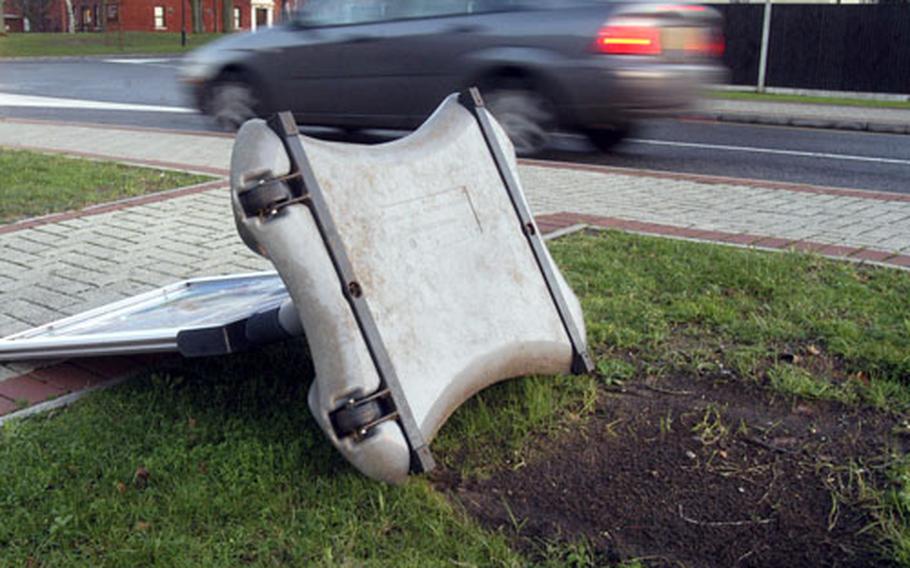 A vehicle passes an advertising sign that was knocked down by strong winds on RAF Mildenhall on Thursday. (Sean Kimmons / S&S)

As of midafternoon, RAF Lakenheath had ceased all flights in the face of gusts of up to 60 mph, with sustained winds at 45 mph rushing over the flat English countryside surrounding the base.

The 48th Fighter Wing&#8217;s F-15 fighter jets, based at Lakenheath, tend not to fly over a threshold of 40 mph sustained winds. One reason is that ejection seats in the one- and two-seater jets can become dangerous if used in high winds, base spokeswoman Staff Sgt. Vanessa Young said.

A few miles away, RAF Mildenhall delayed its flights, including a few KC-135 Stratotanker missions, which support U.S. and NATO operations by refueling aircraft in midair. Aerial refueling is the main job of the 100th Air Refueling Wing stationed at the base.

All flights in and out of Mildenhall were to be canceled if winds and severe turbulence up to 5,000 feet didn&#8217;t subside. As of midafternoon, it didn&#8217;t look like those conditions would be settling down soon, according to base spokesman Capt. Jamie Humphries.

If an aircraft attempted to take off or land in a high crosswind, the winds could cause a wing to dip into the ground or turn it in a dangerous direction, he added.

Weather forecasters at Lakenheath also issued a severe weather warning Thursday as heavy rains fell on the area, though conditions were expected to improve by late evening.

The storm system unloaded its fury throughout the country, toppling trees and causing the British Environment Agency to issue more than 40 flood warnings, according to a BBC report.

The conditions resulted in many delays and closures along British roads, as well as train and ferry services, the report added.

Other airfields near U.S. bases reported few problems. Stansted airport, north of London, had no weather-related delays by midday, a spokesman for the airport said, while at Cambridge City airport only training flights in light aircraft were disrupted, said airport manager Martin Redmore.

At Ramstein Air Base in Germany, a high-wind advisory was posted but there were no problems with the flight schedule.