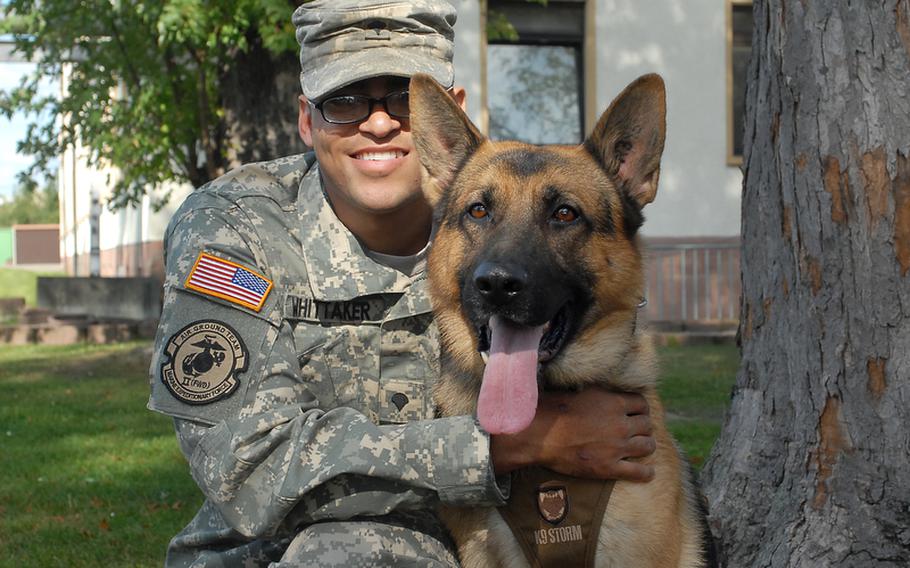 Spec. Marc Whittaker and his bomb-sniffing dog, Anax, back in Heidelberg after Anax lost a leg in July while deployed to Afghanistan. (Nancy Montgomery/Stars and Stripes)

Spec. Marc Whittaker and his bomb-sniffing dog, Anax, back in Heidelberg after Anax lost a leg in July while deployed to Afghanistan. (Nancy Montgomery/Stars and Stripes) 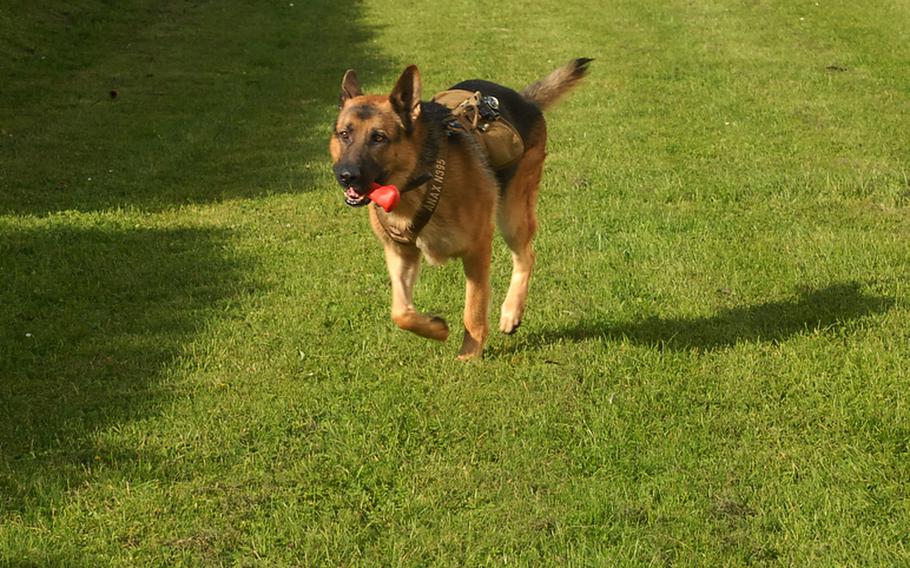 Anax, just three and a half, recovered quickly from his amputation surgery at the U.S. Army&#39;s Dog Center Europe in Kaiserslautern after he was wounded in Afghanistan. He was his old fetch-loving self in about three weeks, said his handler, Spec. Marc Whittaker. (Nancy Montgomery/Stars and Stripes) 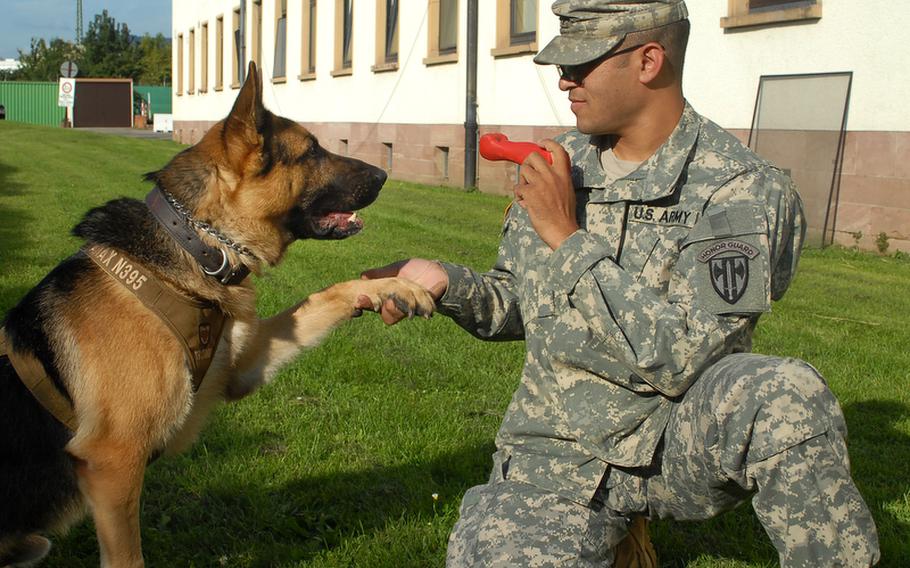 Anax, a bomb-sniffing dog, which had its leg amputated after it was wounded in Iraq, will be retired from duty. Its handler, Spec. Marc Whittaker, is hoping to adopt him. (Nancy Montgomery/Stars and Stripes) 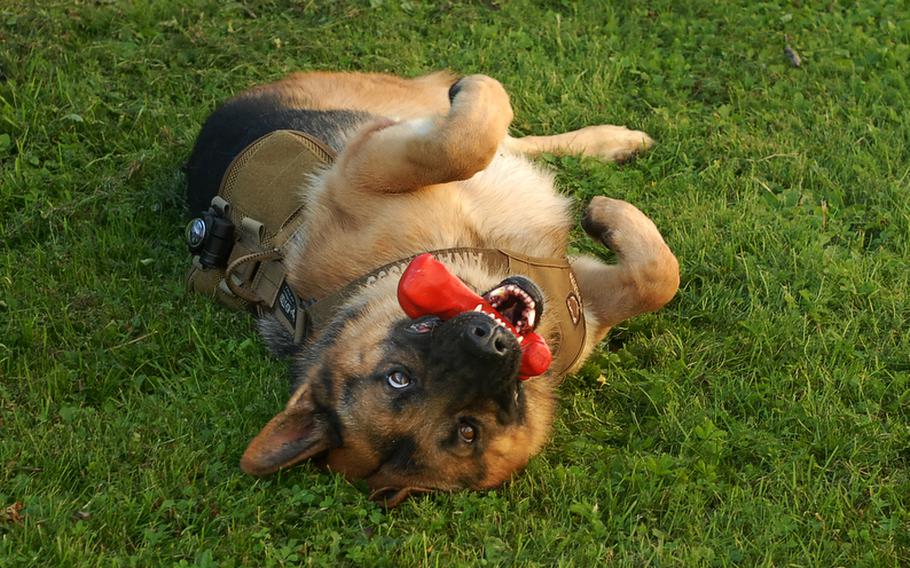 Spec. Marc Whittaker says if he was having a bad day in Afghanistan, Anax, his bomb-sniffing dog, could tell. Then he&#39;d do something goofy to cheer his handler up, Wittaker said. (Nancy Montgomery/Stars and Stripes) 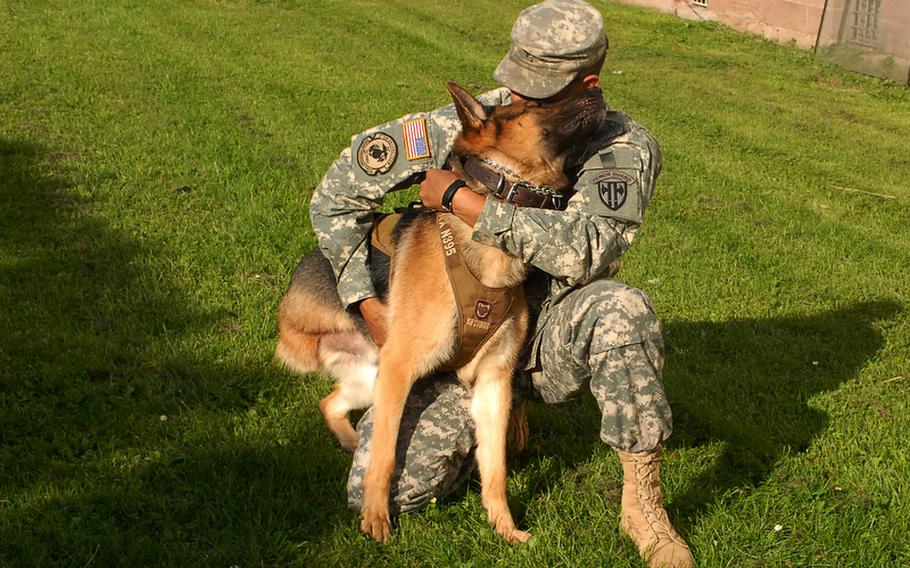 Anax and Spec. Marc Whittaker shared a bond before the dog was hit by an insurgent&#39;s bullet in July and subsequently lost his right leg. The trauma of the event deepened the bond further for Whittaker. "He&#39;s like a son to me," Whittaker said. (Nancy Montgomery/Stars and Stripes)

HEIDELBERG, Germany &mdash; He was a go-getter, an athletic, high-speed soldier with an incredible drive. Young, dark and handsome, he was often playful and humorous.

So when an insurgent&rsquo;s bullet found him on the Fourth of July, his closest friend decided there was no way he&rsquo;d let him die.

&ldquo;I have to get on that medevac!&rdquo; Spc. Marc Whittaker yelled when the shooting stopped, as he hunkered down in a mud hut where he&rsquo;d carried his wounded comrade.

The shooting in Logar province, Afghanistan, during a route-clearance mission, showed Whittaker, a 23-year-old military policeman, how strong his bond was with his wounded friend, Anax, a 3-year-old bomb-sniffing German Shepherd, one of thousands of military working dogs, called MWDs, that have increasingly been used in Iraq and, especially, Afghanistan.

It highlighted the complex emotional trade-offs required of the dogs&rsquo; handlers, who live with the dogs as their closest companions, but are expected to consider them expendable.

&ldquo;Everybody tells us we have to look at our military working dogs as equipment. But it&rsquo;s hard. I got really attached. I realized how attached when he got hurt,&rdquo; Whittaker said. &ldquo;He&rsquo;s like a son to me.&rdquo;

The aftermath of the dog&rsquo;s shooting showed how the military has changed the way it cares for its MWDs &mdash; from battlefield medevacs and life-saving surgery to adoption when a dog can&rsquo;t perform its military job, instead of what 20 years ago was routine euthanasia.

&ldquo;Everything we do is just like in people,&rdquo; said Col. Kelly Mann, director of the MWD Veterinary Service at Lackland Air Force Base. &ldquo;Trying to help them return to duty.&rdquo;

But this is also a story of one soldier&rsquo;s devotion to his dog.

From the time Anax was shot in Afghanistan until he awoke from surgery three days later in the U.S. Army veterinary hospital in Germany, Whittaker never left his side. He didn&rsquo;t eat, and he slept on a pad beside the dog&rsquo;s kennel.

That&rsquo;s where his Heidelberg-based company commander found them napping together &mdash; and welled up. &ldquo;Just to see that level of care from a soldier,&rdquo; said Capt. Aaron Kravitz, Whittaker&rsquo;s company commander at the 529th MP Company, from which Whittaker and Anax deployed as individual augmentees. &ldquo;Never leave a fallen comrade behind. Words to live by.&rdquo;

Anax is among the MWDs trained at Lackland Air Force Base in Texas. The dogs, mostly German Shepherds and Belgian Malinois, are used for protection, pursuit, tracking, search and rescue and, increasingly, sniffing out the homemade bombs that cause the most casualties in Afghanistan.

The U.S. military has about 2,700 dogs on active duty. A month ago, according to the Army Times, CENTCOM said about 40 dogs were deployed in Iraq and 685 were deployed to Afghanistan.

&ldquo;Many people are surprised to hear what MWDs contribute to national security,&rdquo; said Gerry Proctor, spokesman for Lackland&rsquo;s training programs. &ldquo;There is no man-made technology that comes anywhere close to what a MWD can do.&rdquo;

The dogs excel at the work they were trained for, although some turn out to be too anxious on the battlefield and some have diagnosed with canine PTSD, according to military vets and CENTCOM.

But even the best war dog isn&rsquo;t conscious of potential consequences.

&ldquo;They have no idea the thing they&rsquo;re trying to find can blow up,&rdquo; Whittaker said.

&ldquo;They&rsquo;re effective,&rdquo; Burger said, although quantifying that success is difficult. &ldquo;There&rsquo;s bombs and IEDs being found but I&rsquo;m hard-pressed to say they&rsquo;re successful [a certain] percentage of the time.&rdquo;

Getting casualty numbers for war dogs is difficult, but published reports suggest that several dozen dogs have been killed since 2007, including nearly three dozen from special operations forces alone. &ldquo;It&rsquo;s a hazardous job for the dog,&rdquo; said Mike Dougherty at American K-9 Interdiction, which contracts with the Marines to provide about half its Labradors.

Whittaker wanted to be a dog handler to &ldquo;make a difference in the deployment environment and find the explosives before they found our troops.&rdquo;

But as the months passed and the bond with Anax grew, so did Whittaker&rsquo;s apprehension. He attached medals of St. Michael &mdash; patron saint of law enforcement &mdash; to his gear and to Anax&rsquo;s harness.

&ldquo;Any time I sent Anax to search for something, I prayed and I hoped nothing would happen to him,&rdquo; Whittaker said. &ldquo;The whole time I was like, &lsquo;Please don&rsquo;t find anything.&rsquo; Because you don&rsquo;t know if it&rsquo;s a pressure plate or a command wire or remote control. You&rsquo;re just scared.&rdquo;

Whittaker and Anax had been in Afghanistan for about five months, loaned out to various units that wanted their bomb-sleuthing capabilities. The July Fourth mission was to clear the route to a combat outpost before logistics resupplied it. Whittaker and Anax, along with some U.S. infantry soldiers and engineers and a group of Czech explosives specialists &mdash; about 30 men and one dog &mdash; left while it was still dark.

&ldquo;Before the mission, I had a bad feeling,&rdquo; Whittaker said. &ldquo;You still have to do it. I&rsquo;m a soldier and I have to drive on.&rdquo;

They arrived at the post without incident after a few hours, with the convoy following. After checking out a report of unexploded ordnance in a nearby town, the group returned to take up position above the first town, to provide cover as the logistics team unloaded on the road. Suddenly, insurgents launched a rocket-propelled grenade, followed by small-arms fire directed at the logistics team.

Whittaker and the others were ordered to flanking positions.

Anax was on a retractable leash attached to Whittaker&rsquo;s belt. Bullets were cracking overhead, Whittaker said, and there was no cover.

Anax doesn&rsquo;t wear body armor because it&rsquo;s too heavy when walking in the heat.

Man and dog jumped to the road, and Whittaker shielded the dog with his own armor-clad body, with his back to the fire.

Anax was whining, Whittaker said, and bit Whittaker&rsquo;s hand as he tried to cover him, although Whittaker said he doesn&rsquo;t remember it. In the confusion, the soldier didn&rsquo;t know the dog had been hit.

Whittaker saw an empty mud structure and started heading for it.

&ldquo;But I realize Anax isn&rsquo;t beside me,&rdquo; Whittaker said. &ldquo;He&rsquo;s almost always ahead of me, so I know something&rsquo;s wrong.&rdquo;

Whittaker went back, grabbed Anax by the collar and dragged him to the building.

&ldquo;I remember thinking, &lsquo;Oh my God, this is not happening,&rdquo; Whittaker said.

Anax was whining and had blood coming from both hind legs. Whittaker started treating the left leg first, where the most blood was. It turned out that was just a flesh wound. The femur in Anax&rsquo;s right leg, where the blood had clotted, was shattered.

Whittaker yelled for the medic. The medic gave Whittaker bandages and an IV, but left with half the platoon to free an injured civilian trapped in a vehicle. By then, the shooting had stopped.

Whittaker applied pressure bandages to the dog&rsquo;s wounds and tried to start an intravenous line, but couldn&rsquo;t get the IV in. Anax was becoming glassy-eyed and lethargic.

Whittaker worried that he and Anax might not get a spot on the medevac that was arriving about a mile away. He wanted the dog on the helicopter, even if he couldn&rsquo;t go along.

&ldquo;I was determined,&rdquo; he said.

He picked Anax up and started walking to the medevac site. But it was six hours into an exhausting mission, and the 75-pound dog was dead weight.

The Czech soldiers stepped up to help.

In the middle of the combat zone, Whittaker said, a Czech soldier stripped off his shirt to use as a litter but that didn&rsquo;t work.

An Afghan drove up in a truck, and the Czechs persuaded him to let them use his truck to take the dog to the medevac site.

Anax and Whittaker flew from there to Bagram Air Base, and on to Dog Center Europe, the Army veterinary hospital in Kaiserslautern, Germany.

Anax&rsquo;s right leg was shattered too close to the hip to be saved, and after a five-hour operation, the dog became one of the wars&rsquo; amputees &mdash; and eligible to retire.

&ldquo;I&rsquo;m happy the only thing he lost was just a leg,&rdquo; Whittaker said. &ldquo;It could have been a lot worse.&rdquo;

Allowing MWDs to be adopted into civilian life is relatively new. During the Vietnam War, for instance, more than 4,000 dogs were used by the U.S.; only 200 or so survived the war and most were left behind or euthanized, according to the United States War Dogs Association.

President Bill Clinton in 2000 signed legislation allowing adoption of MWDs. For the past several years, the dogs&rsquo; last handlers have been given first right of refusal. Proctor, at Lackland, said about 300 MWDs are adopted annually.

Anax&rsquo;s shooting and the care he received made Whittaker decide he wants to stay in the Army, if he can train as a veterinary technician.

&ldquo;I got to see what they do and how they were able to make him better,&rdquo; Whittaker said. &ldquo;I love MWDs, and I don&rsquo;t want to leave that part of my life.&rdquo;

If he&rsquo;s turned down, he&rsquo;ll get out of the Army, he said. Redeploying as a dog handler is out of he question, he said.

&ldquo;I can&rsquo;t go through what I did,&rdquo; he said. &ldquo;What happened to Anax was devastating to me.&rdquo;

Whittaker said he was able to find a silver lining of sorts.

&ldquo;If he wasn&rsquo;t hurt, he&rsquo;d stay here [in Germany] and I would move on to another duty station.&rdquo; Instead, Whittaker plans to adopt Anax and take him home to Texas.

&ldquo;I&rsquo;ll be his caregiver for the rest of his life,&rdquo; he said. &ldquo;He&rsquo;ll retire fat and happy on my couch.&rdquo;