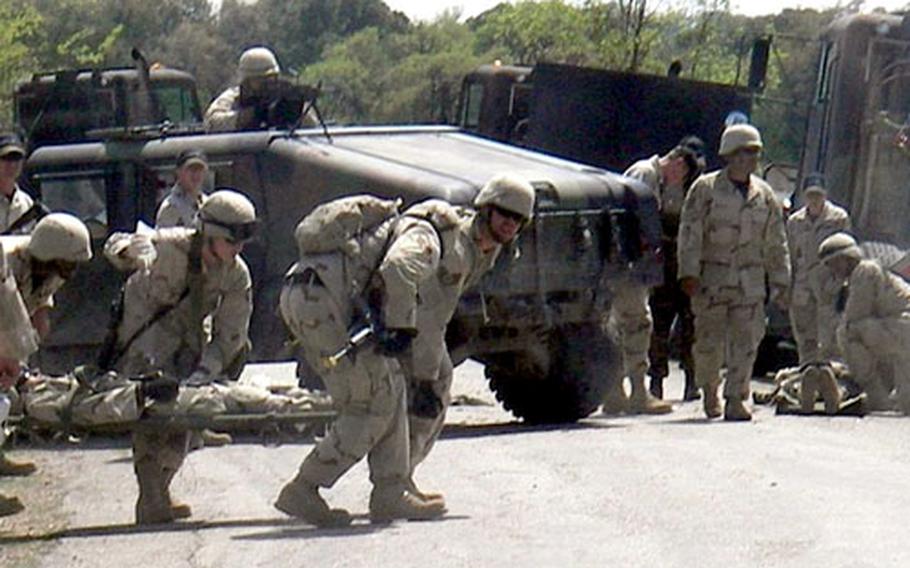 After their convoy was hit by a roadside bomb in Iraq last year, Misawa airmen and the soldiers who were part of their convoy scramble to get an injured servicemember out of harm&#39;s way. (Photo courtesy of U.S. Air Force)

After their convoy was hit by a roadside bomb in Iraq last year, Misawa airmen and the soldiers who were part of their convoy scramble to get an injured servicemember out of harm&#39;s way. (Photo courtesy of U.S. Air Force) 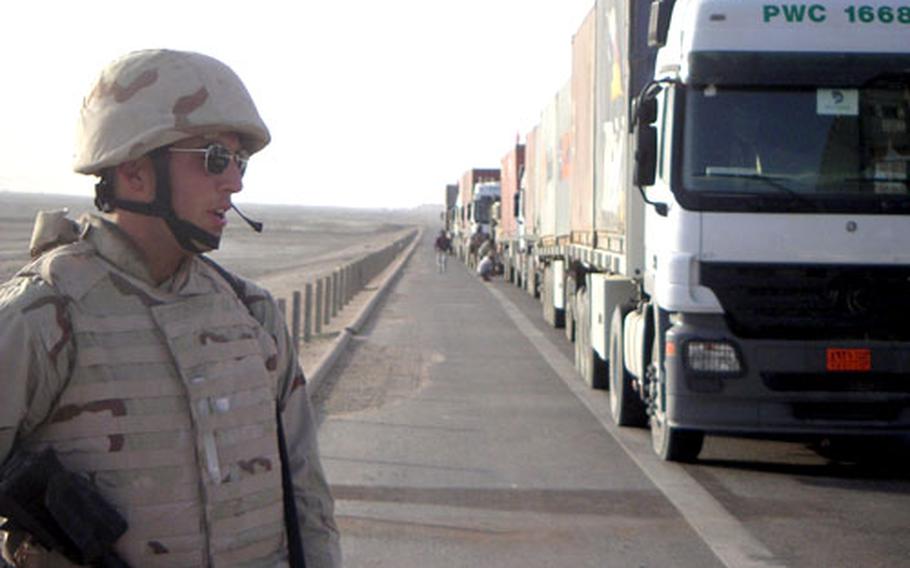 MISAWA AIR BASE, Japan &#8212; Sunflower seeds and beef jerky helped fight fatigue. So did the life stories shared in a dusty truck cab.

But driving the world&#8217;s most dangerous roads for nearly seven months without losing focus or fortitude required, above all, a mind as steely as their armored trucks, say three Misawa airmen recently returned from convoy duty in Iraq.

They didn&#8217;t, when the miles loomed, contemplate the odds of hitting a roadside bombs or entertain the thought &#8220;will my number be up today?&#8221;

Veitz, Karnes and Senior Airman Tristan Bryant were among six Misawa 35th Logistics Readiness Squadron airmen to drive convoys in Kuwait and Iraq last summer and fall as part of a larger team of 170 airmen from bases worldwide.

They deployed for an &#8220;in-lieu-of&#8221; tasking, augmenting the Army in a nontraditional Air Force mission to free up more soldiers for combat.

Airmen have been driving convoys for the Army for more than two years, according to military officials.

The Misawa airmen were assigned to the 424th Medium Truck Detachment at Camp Arifjan, Kuwait, but spent most of their time on Iraq roads hauling and delivering supplies in 30-ton tractor-trailers to bases throughout the country.

Before deploying downrange, the airmen completed about 45 days of basic combat convoy training at Camp Bullis in San Antonio.

That training sharpened combat skills and bolstered their confidence, but more importantly, cemented bonds between airmen who would soon have to rely on each other for their very life.

As a convoy commander, Karnes, 27, a vehicle operations superintendent from St. Elmo, Ill., was responsible for the safe passage of his convoy, which could include up to 35 vehicles per mission, including Army gun trucks and military cargo and civilian trucks.

His first solo mission as a convoy commander was particularly memorable.

Karnes had to relay information back to the command post in Kuwait while directing his team to respond to the incident.

After tending to an injured soldier, the focus was getting the convoy out of the area as quickly as possible.

Most convoy assaults, however, didn&#8217;t do much damage, the airmen said.

Hours on the road were spent talking with the airman in the other seat.

Changing tires &#8212; the trucks the airmen drove had 12 tires &#8212; and pit stops in enemy territory were continual challenges.

Bryant was in a convoy where they had to stop in a dangerous area to change two blown tires. &#8220;It took us about 20 minutes tops, because we had two or three people helping,&#8221; she said.

Adrenaline and training also kicked in.

But it was camaraderie that pulled him through the long deployment, he said.