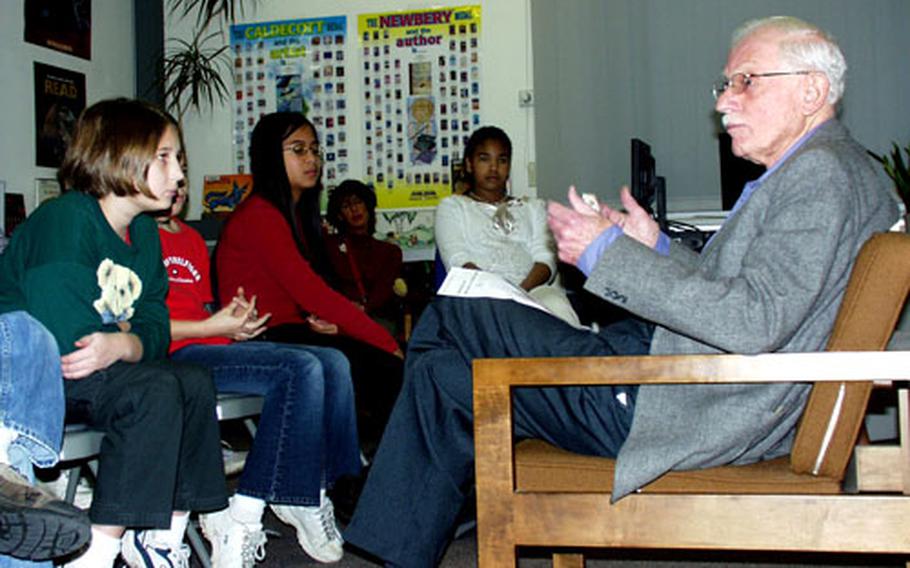 HANAU, Germany &#8212; They fidget in their seats, children restless as children often are when asked to sit still and wait for a grown up to speak.

Minutes later, 79-year-old Dudley Strasburg walks into the Old Argonner Elementary School library in Hanau, Germany. There&#8217;s an air of dignity about this white-haired gentleman. He sheds his coat, accepts a glass of water and takes a seat before a class of fifth graders. It&#8217;s midmorning.

He speaks in a slow, deliberate way, the voice quiet yet engaging enough to hold the kids&#8217; attention. For the rest of the school day &#8212; a stretch broken only by lunch and music class &#8212; Strasburg covers an array of topics, from the Great Depression and World War II to songbirds and running water.

As he will later in the day when he addresses the Hanau chapter of the Warrant Officer&#8217;s Association, Strasburg speaks thoughtfully. He doesn&#8217;t shy away from an issue, nor will he exaggerate. He tells it the way he sees it.

For more than 40 years, teachers in Europe have invited Strasburg to step in front of their chalkboards for what amounts to a reality check.

Born when Calvin Coolidge occupied the White House, Strasburg was a young boy by the time the stock market crashed in 1929. There were bank closures, massive layoffs, hunger, suicides and soup lines.

Strasburg doesn&#8217;t dwell too long on the topic, using his appreciation for Thanksgiving as a bridge to change the tone of his talk. Before long, he&#8217;s talking about the sun, the moon and the beauty of autumn leaves. That, in turn, leads him to point out the awesome wonder of our five senses.

The World War II veteran gave more than a dozen warrant officers food for thought when he met them later in the day.

Strasburg began speaking to military units about a decade ago following the 50th anniversary of V-E Day. Interest in his war stories remain strong. He speaks every few weeks to one unit or another.

Lately, military intelligence units have been knocking on his door. In a couple of months he&#8217;ll visit with troops of the 3rd Corps Support Command in Wiesbaden.

Strasburg spoke a lot about leadership, good and bad. Ruzicka referred to what Strasburg said as &#8220;a kind of cold slap in the face,&#8221; one that reaffirmed for him and others the need to stick to &#8220;the fundamentals of leadership.&#8221;

Strasburg spoke at Ruzicka&#8217;s monthly meeting in December. It was an extremely candid discussion.

Unlike most World War II veterans, Strasburg returned home to the United States determined to share his war experiences, the humorous as well as the horrific.

After the war, Ruzicka returned to the United States, went to college and started a family. Business brought him back to Germany in the late 1950s, and he and his family stayed for years. The time in Germany eventually brought him in contact with the U.S. military community.