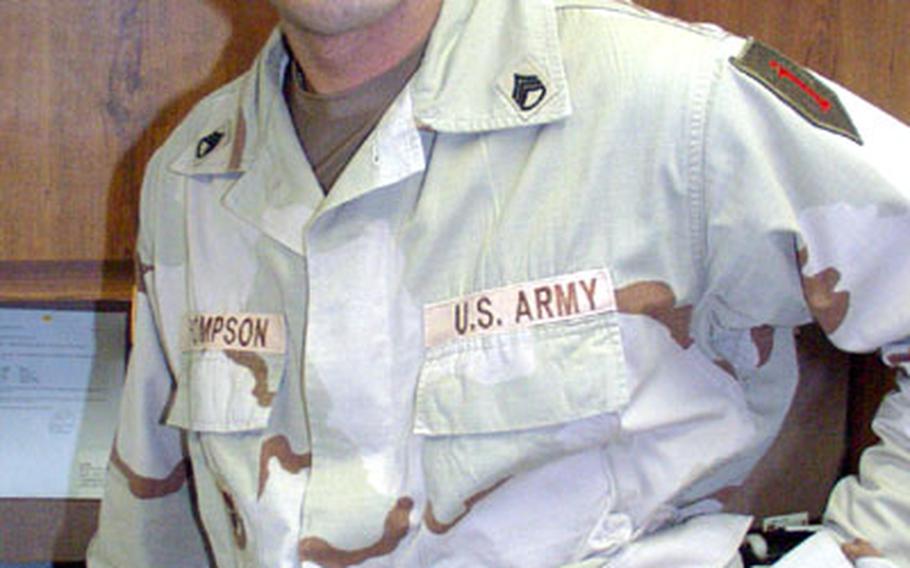 Staff Sgt. Mark Thompson wears a $5,000 insulin pump on his belt. Every nine minutes, the pump shoots a jolt of insulin into his body through a small tube in his stomach to control his Type 1 diabetes, which was diagnosed four years ago. (Steve Liewer / S&S)

Staff Sgt. Mark Thompson wears a $5,000 insulin pump on his belt. Every nine minutes, the pump shoots a jolt of insulin into his body through a small tube in his stomach to control his Type 1 diabetes, which was diagnosed four years ago. (Steve Liewer / S&S) Thompson isn’t worried about passing along diabetes to his 16-month-old son, Kyle. He said his Type 1 diabetes is not typically hereditary. (Steve Liewer / S&S)

So it surprised him on that sunny day in November 2000 when he got lightheaded early in his morning physical training.

He expected to soon add a staff sergeant&#8217;s stripe, a solid achievement for a 23-year-old who had enlisted 4&#189; years earlier almost on a whim after growing up in an Iowa farm town. He also had decided to become a re-enlistment counselor &#8212; a good job for a gregarious soldier with a quick smile and an easy rapport with troops.

At first Thompson wrote off his weakness as the same bronchitis that had plagued his wife, Beth. He&#8217;d been suffering from cold symptoms, too.

The medics gave him one blood test, then, a few days later, a second. Then they broke the news: Thompson had diabetes, an incurable, life-threatening disease.

Thompson had barely heard of diabetes, so he scoured the Internet for information. He learned that, according to the American Diabetes Association, diabetics&#8217; bodies do not produce or properly use insulin. Insulin is a hormone needed to convert sugar, starches and other food into energy.

About 18 million people have diabetes. More than 90 percent of them have Type 2, which is a resistance to insulin. Usually it occurs in middle age or later and is treated with changes to diet or lifestyle, and with medication.

Thompson learned that he had the much rarer Type 1 &#8212; formerly called &#8220;juvenile-onset diabetes&#8221; because it usually appears during childhood &#8212; in which the body stops producing insulin because of a defect in the autoimmune system. Untreated, the body&#8217;s blood-sugar level fluctuates wildly. That can lead to heart disease, kidney disease, nerve damage and blindness.

Needles suddenly became part of his life. Any food or exercise affected his blood sugar and required a shot, up to a dozen a day.

Later that year, Thompson would get the $5,000 insulin pump he now wears on his belt. Every nine minutes, it shoots a jolt of insulin into him through a tiny catheter that runs to his stomach. It&#8217;s made life much easier.

As much as the threat to his health, Thompson worried about the threat to his career. He had secured a spot in the Army&#8217;s Basic Noncommissioned Officer Course in January 2001, a requirement for the promotion to E-6 he had earned.

He convinced doctors he could go. He did well at BNOC and, a few months later, was the honor grad, and earned the highest physical training score at career counselor school.

Still, his career remained in danger. A medical board in Washington would review his case and decide, finally, whether Thompson could stay in the Army.

His doctors backed his bid. In July 2002, the board agreed.

Thompson&#8217;s next big challenge came after the 1st Infantry Division got orders to Iraq for February 2004. He learned that Sgt. Maj. Scott Kuhar, commander of the division&#8217;s career counselors, had selected him to stay home. That bothered him.

He found out the hospital in Tikrit stocked insulin. He learned that his downrange office had a refrigerator to keep his medicine safely cool &#8212; a big problem during Iraq&#8217;s blistering summers. He secured syringes and special cool pack for emergencies.

Thompson convinced Kuhar he could go. He was in Iraq from February to July, then came home to W&#252;rzburg for his turn in the rear. He was scheduled to return to Tikrit over this weekend and stay until the 1st ID returns to Germany next spring.

According to the division&#8217;s surgeon, Lt. Col. Michael Brumage, Thompson is the only insulin-dependent diabetic deployed with the unit in Iraq.

Not that it&#8217;s been easy. Thompson said he&#8217;s been forced to use all of his contingency plans. His pump has broken twice, forcing him to return temporarily to his regimen of shots. And he&#8217;s had to use his cool packs several times during power failures.

Last week, Thompson played with his 16-month-old son, Kyle, and eagerly awaited his return to the combat zone.

Not so wife Beth, whose adjustment since his diagnosis has been almost as great as her husband&#8217;s. Now, on top of the usual deployment fears, she&#8217;s concerned about his disease.

Thompson freely discusses his diabetes, and is not shy about injecting himself in front of others.