Stripes Spotlight: Top student who lived most of his life overseas returns to America 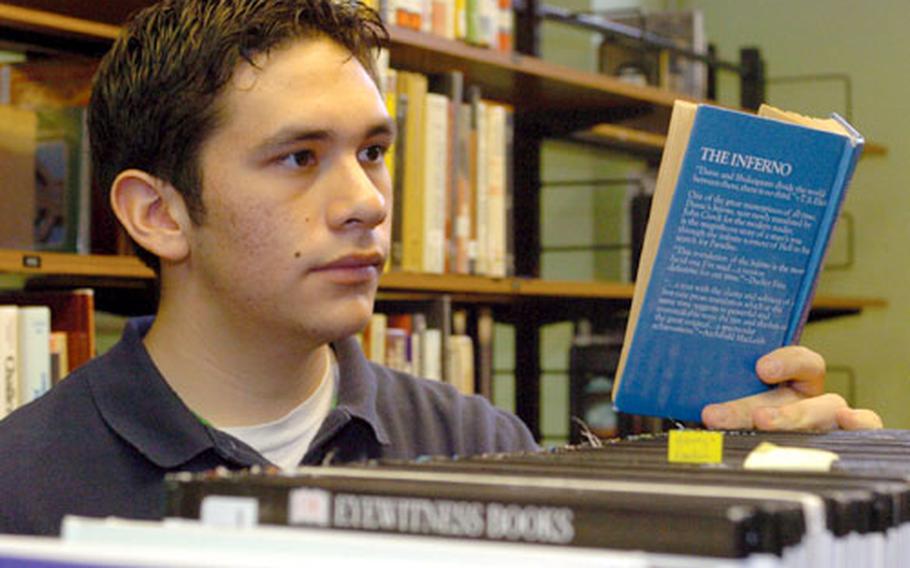 Jose Tovar Jr., an honor student, three-sport letterman and Congressional Award winner, checks out a book in the Bitburg High School library, where he assisted between classes. He will be attending classes at Georgetown University in the fall, marking the first time he has lived in the United States since he was one year old. (Photo courtesy of U.S. Air Force)

KAISERSLAUTERN, Germany &#8212; Jose Tovar Jr. is a 17-year-old National Honor student and Boy Scout who will go to college on an Air Force ROTC scholarship.

But when he attends Georgetown University in Washington, D.C., this fall, he admits he might feel like a foreigner in his own country. It will be the first time the Austin, Texas, native will have lived in the United States since he was a year old.

The Bitburg High School graduate, whose parents both work for Defense Department schools, has spent nearly his whole life in Germany&#8217;s Eifel region. While he may pledge allegiance to the United States, he considers Europe home.

His parents moved to Germany in 1989, when Tovar was almost 2. His father, Jose Sr., is a facilities engineer for the Department of Defense Dependents Schools system. His mother, Elsa, is a teacher at Spangdahlem Air Base.

What Tovar knows about American culture and life, he has learned from annual visits to the United States and his life on a U.S. military installation in the middle of rural Germany&#8217;s wine country.

He sees this fall as an opportunity to learn what it is like to live in America as opposed to living in &#8220;little America&#8221; overseas.

There are little differences between the United States and Germany that most Americans might not notice, he said. Convenience is one thing. With stores open 24 hours a day, seven days a week, he can buy anything he wants at any time.

His parents are confident their only son will make the adjustment.

The lifelong Defense Department schools student has won a long list of top awards and scholarships. He was presented the Congressional Award, the highest honor an American teen can receive. In April he was named the top youth in U.S. Air Forces in Europe for his academic achievement and community service. In March, he earned Coca-Cola&#8217;s regional award and a $4,000 scholarship.

He also was his school&#8217;s valedictorian and Boys and Girls Club of America youth of the year regional finalist.

Tovar&#8217;s father describes him as a quiet, driven student who sets high goals and reaches them. He attributes his son&#8217;s success to growing up overseas.

Tovar credits his parents for much of his success. His father volunteered to coach his sports teams and often chipped in to help with his many after-school activities. Jose Jr. lettered in tennis, wrestling and soccer.

In addition to sports, much of Tovar&#8217;s spare time has been dedicated to community service.

Shortly after the Sept. 11, 2001, terrorist attacks against the United States, he led a collection drive for teddy bears and letters to comfort children affected by the tragedy. He and other volunteers collected 500 to 600 stuffed animals for children who lost family members in the attack.

He said the importance of volunteering is something instilled in him early.

Although Tovar considered studying medicine, his experience overseas has him thinking about entering international government. And although he has never lived in America, he is excited about going to school in the nation&#8217;s capital.

His parents believe their son&#8217;s biggest adjustment will be no different than other freshman college students: living away from home for the first time. The difference is that &#8220;home&#8221; is a U.S. military community in Germany.