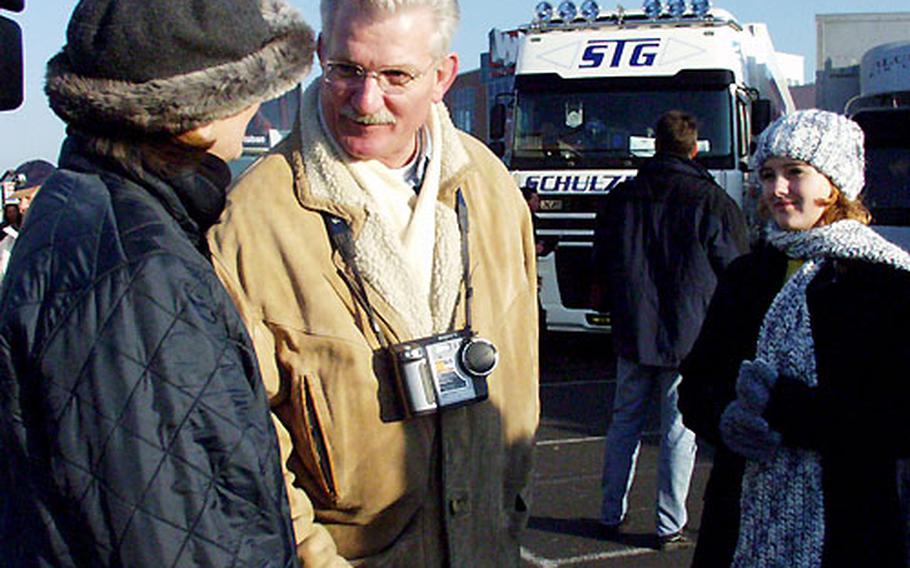 James Federline prepares to leave for Romania with a convoy of trucks carrying supplies and gifts. (Rick Scavetta / S&S)

GR&#252;NDAU, Germany &#8212; As six long trucks loaded with donations lined up for a convoy to Romania, James Federline smiled. Much of their cargo came from military communities, thanks to his efforts.

A community liaison officer for the U.S. Army in Wiesbaden, Federline used his ties to both American and German communities to gather nearly eight tons of supplies over the past six months.

With that, Federline boarded a bus to accompany the goods to Romania &#8212; his fourth such trip in 18 months.

It all began in a bistro near his home in Hochheim, Federline said. A Romanian waitress told the retired Army non-commissioned officer about the plight of children living in poor conditions in the former communist country. The story tugged on his volunteer spirit.

Within a few months, he collected two tons of school supplies, books and clothes. Federline connected with the Rudolf Walther Foundation, named for a German furniture mogul who began the goodwill operation, to add his collections to their established convoys. The foundation also supports needy children in Guatemala and Bosnia and Herzegovina.

In this recent shipment Federline included 490 boxes of donated supplies, 100 donated bicycles and an electric organ. He also took along a Santa Claus outfit to wear when passing out the gifts.

Ramstein freshman Gina Barker accompanied Federline as part of a Girl Scout project. She will create a slide show for fellow students in hopes that they will contribute to future relief efforts.

Born in Baltimore, Federline enlisted in the Army in 1968 to train for missile electronics repair. His first assignment was in Hanau, where he learned German and about the German culture. Up until then, he had only one high school German language course.

In the mid-1970s, while assigned to the 101st Airborne Division at Fort Campbell, Ky., Federline returned twice to Germany, serving as a translator during REFORGER exercises. By 1977, he returned to Germany to serve in the 563rd Ordinance Company in Wiesbaden.

A major turning point in Federline&#8217;s life came in 1986. Then a 38-year-old sergeant first class, Federline earned an appointment to a military position at the U.S. Embassy in Bonn. At the same time, the four-pack-a-day smoker suffered a heart attack. During his recovery, the self-proclaimed workaholic took a good look at his life. He quit smoking and began getting involved in programs to help children and his community.

At first, he volunteered to lead Boy Scouts. Then he got involved in the U.S. schools in Wiesbaden. He has remained busy ever since.

In 1992, Federline retired from the military. The next year, he found himself working as a liaison between U.S. forces in the German state of Hessen and local governments.

In addition to the Romanian relief efforts, Federline helps collects stamps for a workshop that supports the disabled by making collector&#8217;s sets with the stamps to sell to the public.

And he has not dropped his other interests. In the mid-1990s he began a mentoring program that paired adults from Wiesbaden&#8217;s civilian and military communities with high school students. It thrived for the five years it was under his direction. He also served as chairman of the high school&#8217;s School Advisory Committee while one of his children was a student there.

He currently serves as a member of no fewer than 15 community groups, each with meetings and events to attend.

Federline credits his wife, Anna, for not only accepting all the time he spends helping others, but also assisting when possible.