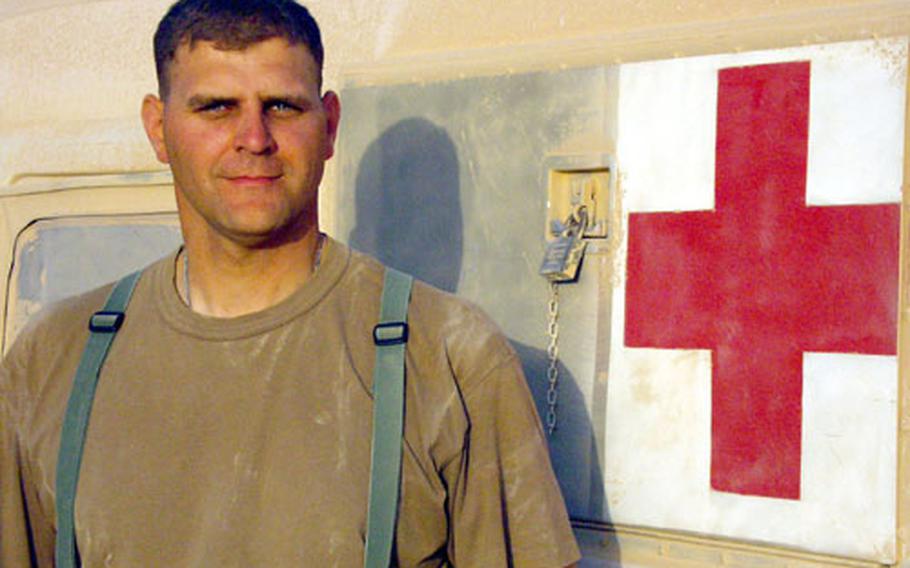 Halfway through a routine ferry run aboard a helicopter March 29 between Camp Udairi, Kuwait, and this base camp, a call came for help. A medical evacuation Black Hawk was hauling an injured Marine back from the front.

The medical crew wanted to take the Marine to a full combat support hospital like the one at Camp Udairi. But they didn&#8217;t have enough fuel to take him anywhere except Talil air base outside Nasiriyah.

The Marine had been shot in the pelvis, so Geracci &#8212; a urologist back home at Brooke Army Medical Center in San Antonio &#8212; was the right man for the job. He was dropped off at Talil, and headed straight for the 86th Combat Support Hospital&#8217;s surgery suite. An orthopedic surgeon and a general surgeon already were at work on the Marine.

Geracci performed an exploratory procedure called a laparotomy &#8212; surgery that involves opening the abdomen. He discovered the bullet had penetrated the Marine&#8217;s pelvis from the front, gone through the bladder, then ricocheted off a bone and gone back through the same organ again.

He diverted the urine flow to reduce the odds of infection and stitched the organ back together. In less than two hours, he was back on the Black Hawk returning to his camp. His day had certainly taken a strange twist.

Working as a flight surgeon in a battle zone is more like being a small town doctor than a big city specialist. He knows soldiers are reluctant to report ailments, especially when there&#8217;s a war on. So each day he packs his bag and walks around the 1-227 Aviation camp, popping his head into tents and making small talk.

Geracci knows the life well. He is the son of an Air Force physician. He joined the Army 12 years ago after graduating from the ROTC program at Arizona State University, with a plan to let the service send him to medical school.

They made him a doctor, but the service obligation is heavy. His commitment doesn&#8217;t expire until 2013.

Geracci doesn&#8217;t mind. A military doctor is what he always planned to be.

After finishing medical school in 1996, he spent a year interning at Brooke. He had planned to be a surgeon, but found he didn&#8217;t care for it.

He chose urology because of the variety. He can transplant a kidney or perform a vasectomy. He likes the regular hours, as do his wife, Kristie, and three sons, ages 8, 4 and 2.

He also became a flight surgeon, serving three years with the 1st Squadron, 7th Cavalry Regiment, including a nine-month rotation in Bosnia. This open-ended deployment, with its harsh weather and living conditions, is his second &#8212; and most challenging.

Geracci works out of a small tent with a small examining table in the center. He has drawers and trunks full of spare medications, but still runs short because the same ones seem to be in demand. He lives next door with his medics and the chaplain.

Being a flight surgeon isn&#8217;t always an easy job. He has studied how flying affects a pilot&#8217;s body, and vice versa. Each year, every pilot, military or civilian, must see a flight surgeon to be certified as healthy to fly. So the doctor holds sway over whether the pilot takes to the sky or remains earthbound.

Geracci&#8217;s natural smile and friendly, direct manner help to lessen the suspicion. He said he has only twice disqualified a pilot from flying, and in one of those cases he did everything he could to get the pilot a waiver.

With his trauma-team training at Brooke, however, he sometimes gets a chance to do more. His wife said he recently earned a commendation for stopping at the scene of a car accident and, on the spot, amputating a woman&#8217;s legs to save her life.

Capt. Norma Merced, 29, is a doctor at the medical clinic at Illesheim Army Airfield in Germany. She trained with Geracci during his residency at Brooke.