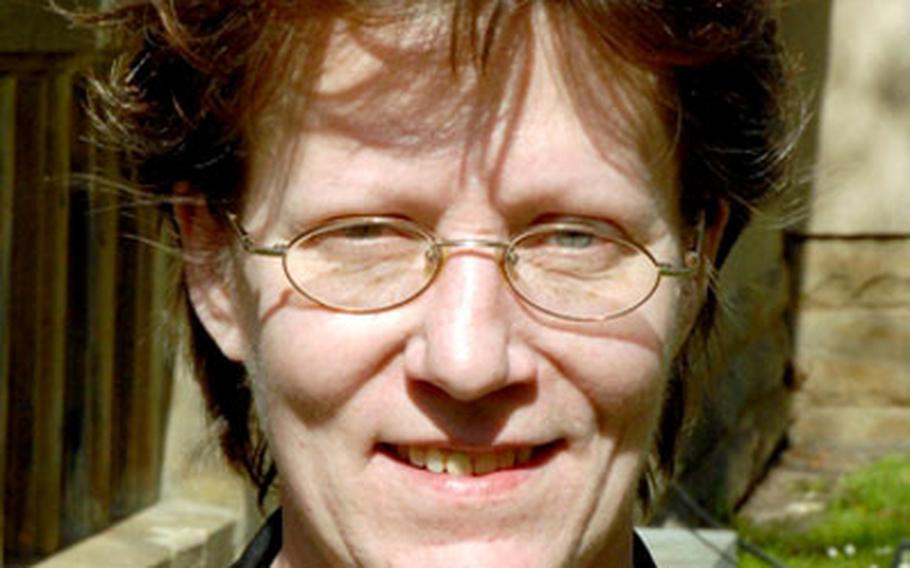 Anderson, an American/German dual citizen, has been manager since June, when she took over after the club had been closed for several years. The Warner Club now has a beer garden.

Whose idea was it to open a beer garden?

It was my idea. When I would walk out and see the beautiful park and building I thought, &#8220;this place needs to have a beer garden.&#8221; I wanted to have it here, because why send people off-post when we have the facilities on post? That way no one has to drive and no one will get into trouble.

You used to own a restaurant in Bamberg, why did you give that up?

I think that your heart needs to be in one place. When I found out that I&#8217;d gotten the job here, I decided that this is where I wanted to be.

So you use all German beer at the beer garden?

Well, I myself think it&#8217;s very good beer. When I decided to open the beer garden, I made one call to a supplier I had worked with before. I got tables and chairs and umbrellas. I didn&#8217;t cost me a penny. A lot of Americans are interested in beer gardens, and a lot go to Germany to go to them.

It has nothing to do with quality. I just like the way it tastes. I have had many beers in America, and sometimes the cheapest beer is the best, like Schlitz.

What kind of beer would you drink if you went to a beer garden?

If I went to a beer garden here in Germany, I would drink whatever they have. There are many breweries, and each one is different.

What kinds of beer do you have?

Aside from managing and working on the beer garden, do you do anything else?

Yes, I am also the head chef. I cater to the Americans, but being that I am German, I also make German food, and everything&#8217;s homemade. When I worked with the commissaries I dealt with food, and it wasn&#8217;t that far-fetched to switch to the other side. All of my life I&#8217;ve loved to cook. I&#8217;ve been to America just about 45 times and I know what service is supposed to be. Many of the servers working in Germany should not be doing what they do. If you are going to work in service, you must love it.

What services do Americans expect that they don&#8217;t get here in Germany?

For one thing, it&#8217;s friendliness, giving you a greeting when you walk in the door, making you feel at home. In America, even if a place is busy, a server will make eye contact with you to let you know that you&#8217;ve been noticed. One thing I see a lot is servers in Germany not talking to you. They&#8217;ll come with your food and BANG, they&#8217;ll slap it down in front of you.

Interview by Mark St.Clair. Know someone whose accomplishments, talents, job, hobby, volunteer work, awards or good deeds qualify them for 15 minutes of fame? How about someone whose claim to glory is a bit out of the ordinary &#8212; even, dare we say, oddball? Send the person&#8217;s name and contact information to news@mail.estripes.osd.mil.