Stripes Spotlight: A 'professor' in a class by himself 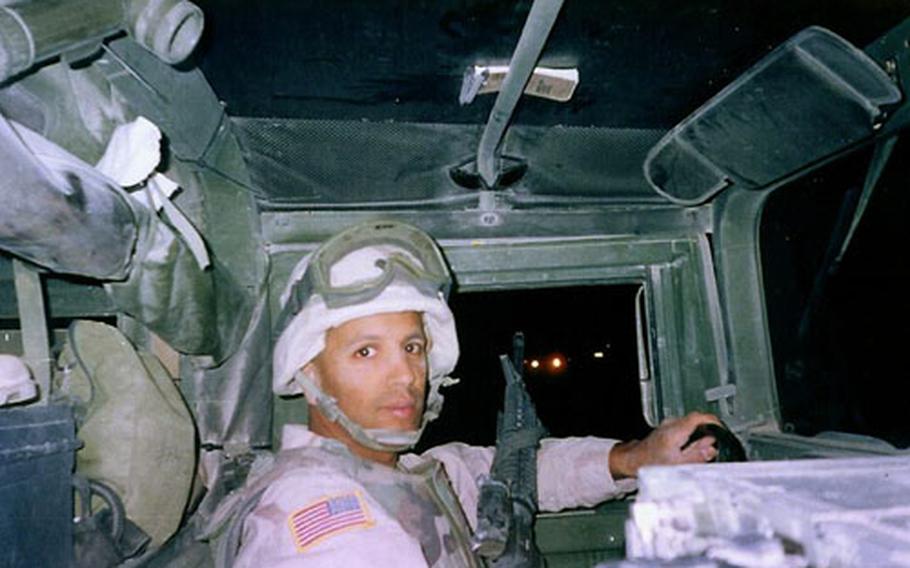 Spc. Joseph Roche of the 16th Engineer Battalion based in Giessen, Germany, prepares to go out on patrol in Baghdad, Iraq, last summer. While deployed there in April, he wrote a letter to Stars and Stripes to publicize progress being made by U.S. troops in Iraq. The letter was eventually quoted by President Bush at the Republican National Convention. (Photo courtesy of U.S. Army)

In fact, his story is so novel that, at first, some of his colleagues didn&#8217;t know what to make of this man from Minnesota.

His age, education, demeanor, globe-trotting ways and olive-colored skin (his father is from India) raised eyebrows and got folks whispering. Some suspected Roche of being an Army undercover agent. Others thought he could even be a member of an al-Qaida sleeper cell.

For the last two years &#8212; and for the next two &#8212; Roche has been a member of the U.S. Army. It is a calling that came relatively late in life, but one the cerebral college graduate felt he had to answer.

&#8220;He barely made [the deadline],&#8221; said Sgt. 1st Class Patrick Adelmann, the Minnesota recruiter who brought Roche into the fold.

Roche, who turns 37 next month, joined the Army just before his 35th birthday, the cutoff for new enlistees. Six months later he was in Iraq as a member of the 16th Engineer Battalion, based in Giessen.

During his 14-month tour to the Middle East, Roche distinguished himself in common and uncommon ways.

The letter, which ran in the Be Our Guest section of the April 4 Sunday magazine, would soon endear him to tens of thousands of people, from his buddies in Baghdad to radio announcers back home, such as Rush Limbaugh, to the man who lives at 1600 Pennsylvania Ave.

&#8220;Our troops know the historic importance of our work [in Iraq],&#8221; President Bush said in his acceptance speech last month at the Republican National Convention. &#8220;One Army specialist wrote home: &#8216;We are transforming a once-sick society into a hopeful place. The various terrorist enemies we are facing in Iraq are really aiming at you back in the United States. This is a test of will for our country. We soldiers of yours are doing great and scoring victories in confronting the evil terrorists.&#8217;

After the speech, the president&#8217;s staff sent an autographed copy of the speech to Roche, something he proudly produced during a recent visit to his apartment in Giessen.

Speaking out publicly is something Roche has grown accustom to since junior high school.

As a young teen in Minneapolis, Roche spearheaded petition drives and gave political speeches on subjects such as prayer in schools and aid for the Nicaraguan contras.

After high school, Roche moved to Washington, D.C., where he worked for seven years on conservative campaigns and issues. Eventually he returned to his roots to attend the University of Minnesota, earning a history degree.

Before departing for Iraq, the staff sergeant gave Roche a nickname: the professor. While Roche&#8217;s knowledge extends well beyond history, it is his forte, enough so that his superiors asked him before the unit deployed to brief younger soldiers about the intricacies of Iraq and the Middle East.

During the war, Roche was the driver for 1st Lt. Andrew Bischoff, then a platoon commander in Company C.

Bischoff described Roche as a shy, hard-working guy who is respected as much for his humility as for his knowledge.

Both now chuckle over how they would discuss current events and history as they drove around on missions. As they scanned the horizon for bad guys and improvised explosive devices, subjects such as the merits of the Prussian empire would help break the tension.

Over the years, Roche has held a variety of jobs: bus boy, hotel manager, police dispatcher and security cop. Prior to joining the Army, he spent a year in Israel with Sar-El, a nonprofit, nonpolitical volunteer organization.

Roche was in Israel on Sept. 11, 2001, when terrorists struck New York City and the Pentagon. Roche, who is not Jewish, figured if he could give of himself in Israel, he should do the same for his homeland.

Upon his return, he walked into Adelmann&#8217;s office and declared his intention to enlist. A year later, as the clock was winding down, Roche followed through.

Adelmann, who spoke by telephone from his office near the University of Minnesota campus, said he would never forget Roche.