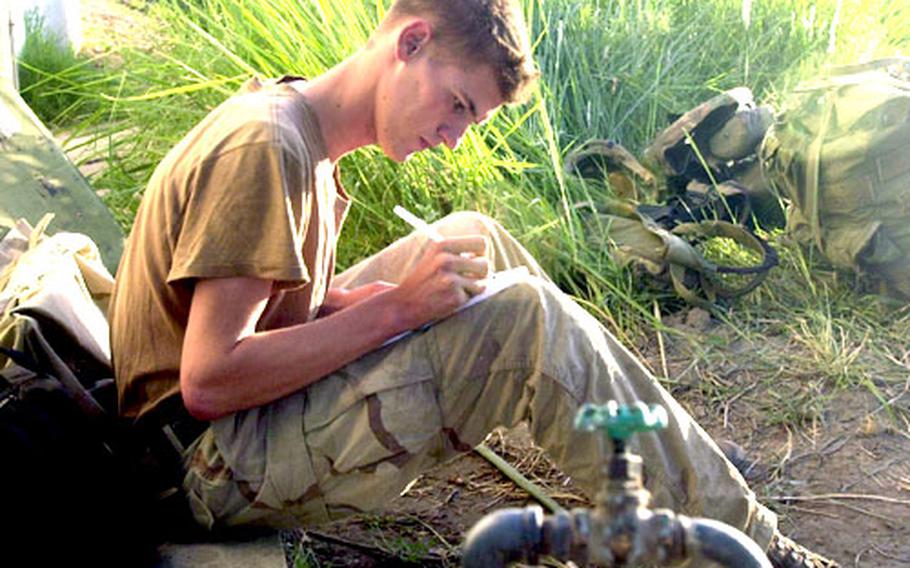 A soldier fills out a Stars and Stripes survey form while stationed in Iraq. Nearly 2,000 troops completed the form. (David Josar / S&S)

A soldier fills out a Stars and Stripes survey form while stationed in Iraq. Nearly 2,000 troops completed the form. (David Josar / S&S) 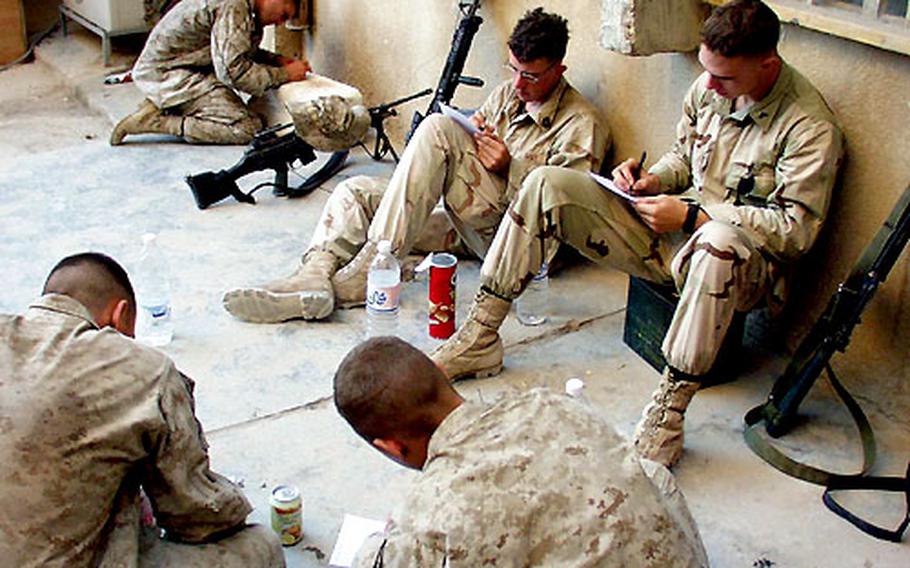 Marines put down their weapons and fill out survey forms for Stars and Stripes reporters in Iraq. (Marni McEntee / S&S) 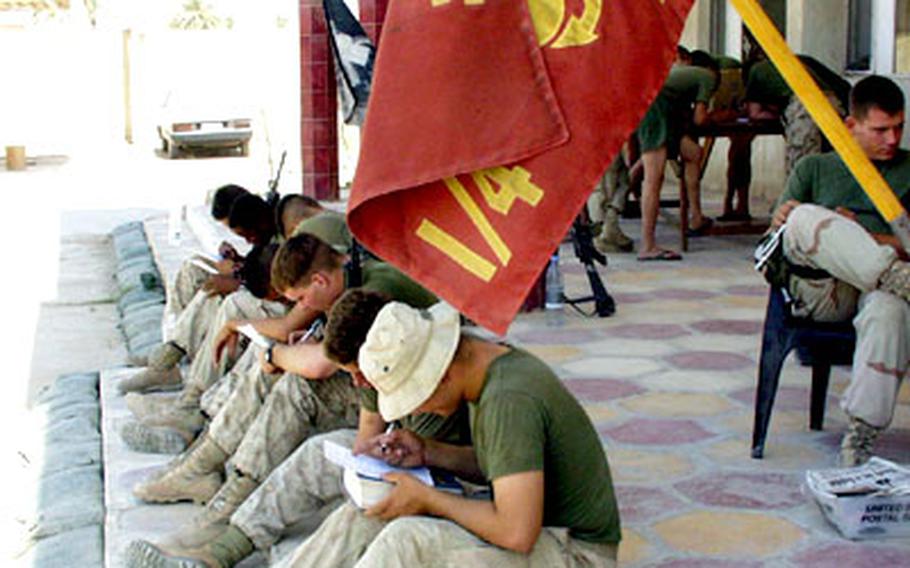 Marines from the 1st Battalion, 4th Marines of the 1st Marine Division fill out survey forms at Camp Twin Towers, a former headquarters for the Baath Party. (David Josar / S&S) 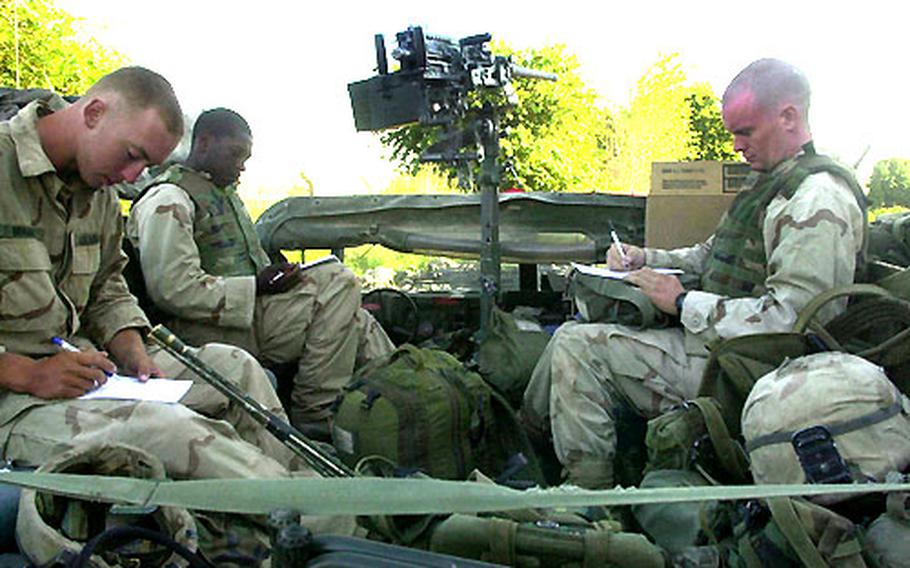 From the Kuwaiti border in the south to the rugged frontier bordering Turkey in the north, Stripes surveyed some 2,000 troops across Iraq. (Jon R. Anderson / S&S) 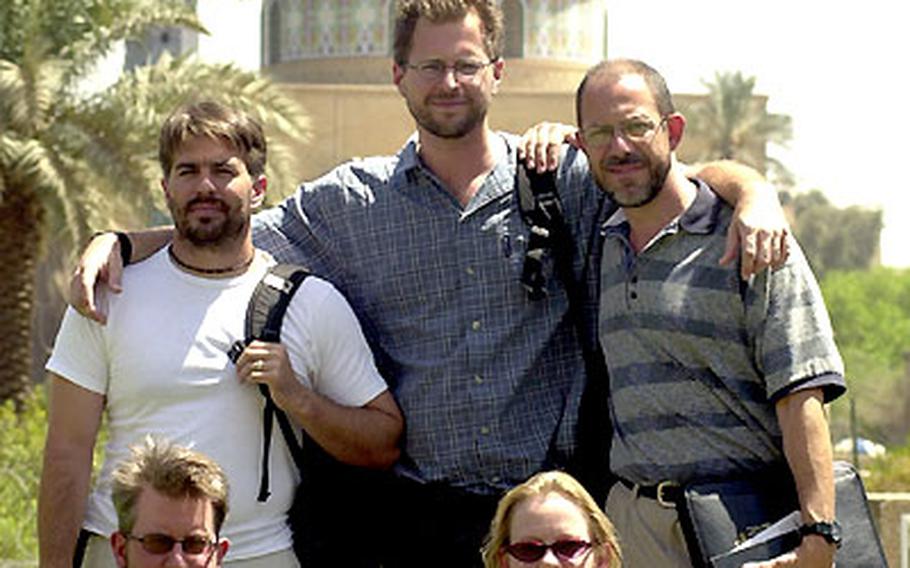 Stars and Stripes reporters fanned out across Iraq to talk to troops about the conditions and their morale in Iraq. Pictured in front are reporters David Josar and Marni McEntee. In the back, from left, are Scott Schonauer, Jon Anderson and Steve Liewer. Not pictured: Terry Boyd, Lisa Burgess, Sandra Jontz and Ward Sanderson. ()

Even before the war in Iraq started, the mail started coming in to Stars and Stripes.

The letters page was filled with notes from servicemembers raising concerns in the Middle East. Many complained about living conditions, inequities and problems with the mail.

As the warfighting force evolved into a stabilization force, the letters continued to flow into Stripes offices. Between June and September, Stripes printed 200 letters from troops in the deserts of Iraq and Kuwait and other remote outposts that have led the fight against terrorism.

Roughly 60 percent complained about various things, ranging from living conditions to redeployment dates back home. The remaining 40 percent urged the others to get on with their duty.

With so many voices clamoring for attention, Stripes decided to try to find out what the ground truth was in Iraq. What were the concerns troops had as they watched their mission change from storming Baghdad to patrolling it? Were things as bad as some servicemembers said? Were conditions as good as others said?

Armed with satellite phones, laptop computers and a questionnaire that sought to seek soldiers&#8217; opinions, three teams of reporters were dispatched to Iraq to see for themselves what it was like. One team of two reporters headed north to Mosul, another south toward Babylon and others worked around the Baghdad area.

The goal was to talk to as many servicemembers as possible. They were asked to fill out a 17-part questionnaire. The results can&#8217;t be projected onto the entire military population in Iraq, but the returns were impressive.

Initial plans called for having about 1,000 servicemembers fill out the questionnaire. Visits were expected to be made to about a dozen camps during a three-week window in August. Instead, 1,935 servicemembers filled out the questionnaire, and the seven reporters visited nearly 50 camps in Iraq. Some of the troops said great things about their mission and what they were doing. Others were not as positive. All wanted to be heard.

Over the next six days, Stripes will tell those servicemembers&#8217; stories, sharing their victories, their battles and their concerns.

All are important, especially to the people serving in Iraq and the grateful nation back home.

The package, to which Stripes devoted an unprecedented amount of time and resources without the involvement of the Defense Department, will cover an array of topics ranging from troops&#8217; morale and changing mission to hidden benefits to deployments and suggestions on how to improve future rotations.

While the package ends after seven days, the complete coverage will continue as long as troops remain in the Middle East.

Stripes will continue to listen.