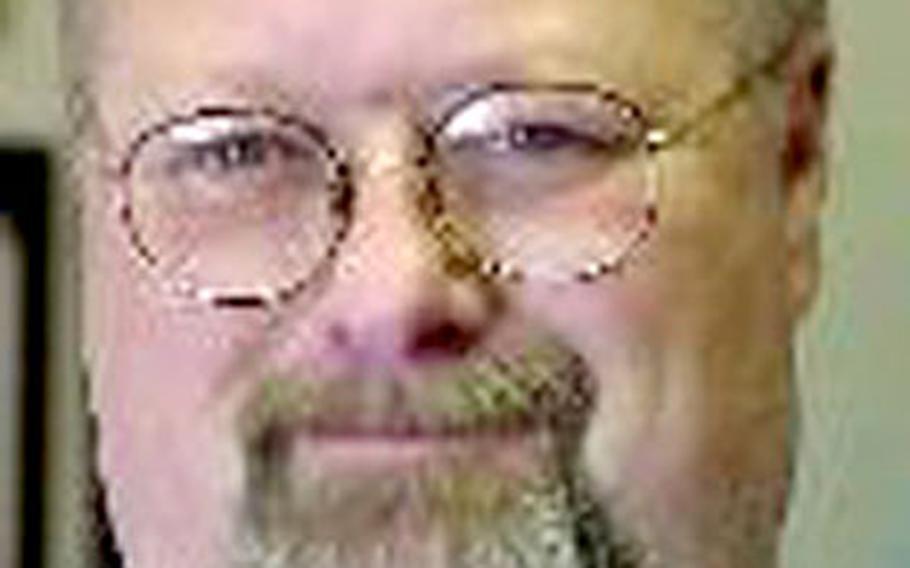 Stars and Stripes reporter Greg Tyler, who reported from Sasebo Naval Base, Japan, died Sunday after suffering a heart attack. He was 46. ()

CAMP FOSTER, Okinawa &#8212; Gregory C. Tyler, a reporter and photographer for Stars and Stripes since June 1999, died Sunday morning in a Japanese hospital in Sasebo.

His death came after he collapsed from a heart attack Thursday on Sasebo Naval Base. He is survived by his wife, Shirley, and son, James, 14. A memorial service is tentatively set for 11 a.m. Friday in the base chapel.

Tyler, 46, was a native of Macon, Ga. When he wasn&#8217;t running the Sasebo News Bureau for Stars and Stripes or on the road covering Marine Corps Air Station Iwakuni near Hiroshima, he wrote poetry and short stories.

Earlier this year, he branched out and started his own online magazine, The Quill and the Cross (www.quill-n-cross.com), in which he shared his passion for writing and his deep sense of Christian-based spirituality.

Friends and family said that sense of being at peace with himself and what comes after death carried him through his last days while doctors struggled to treat a blocked artery that was too far gone for open-heart surgery.

&#8220;I was with him until the very end and even though it was so difficult to say goodbye, he said he was hearing music and I know he&#8217;s with our Lord and Savior Jesus Christ,&#8221; his wife wrote to a friend.

&#8220;Greg&#8217;s death is a blow to Stripes, and we know he will be missed by the people he worked with at Sasebo and Iwakuni as well,&#8221; said Thomas P. Skeen, Pacific assistant managing editor for Stars and Stripes.

&#8220;He was a big man with an enormous compassion and respect for the sailors, Marines and civilians he covered for more than six years at the two bases. And he dearly loved writing and telling their stories. I think it&#8217;s only fitting that the last story he wrote for Stripes was about a sailor who wrote poetry.&#8221;

&#8220;Tyler was a well-liked member of the staff who was concerned about his co-workers,&#8221; Korea bureau chief T.D. Flack said.

&#8220;Greg was always the first person to send a note of congratulations or condolences,&#8221; Flack said. &#8220;He took the time to let his co-workers know that he cared about them and their personal lives.&#8221;

Stripes sports reporter Dave Ornauer was on hand to greet Tyler when he first arrived at Stars and Stripes and worked with him on several feature stories.

&#8220;From the very first, Greg struck me as a very friendly, personable guy,&#8221; Ornauer said. &#8220;And, through all his years, Greg always remained a punctual, responsible and ever-helpful presence, no matter the story, no matter the time pressure. It didn&#8217;t hurt that he was an Atlanta Braves fan, either.&#8221;

People at Sasebo said Tyler&#8217;s passing leaves a noticeable gap in the community.

He said Tyler was well-known and admired at the base, and as word spread of his death people expressed their shock.

Michael Seitz, a teacher for nearly 10 years at E.J. King High School at Sasebo, praised Tyler&#8217;s reporting and involvement with the Sasebo community.

Tyler was a graduate of Macon Junior College in Macon, Ga., and Coastal Carolina College in Conway, S.C. Before coming to Stripes he was the Internet content manager for the Augusta (Ga.) Chronicle. He also previously worked as a city editor for The Florence (S.C.) Morning News and The Aiken (S.C.) Standard.

One of the last things Tyler wrote for his Web magazine was a short story he penned just before Easter. It was a memory he had of his father, who died of a heart attack in December 1968 at the age of 42, when Tyler was 9.

At the top of the story Tyler included a passage from the Bible, James 4:14.