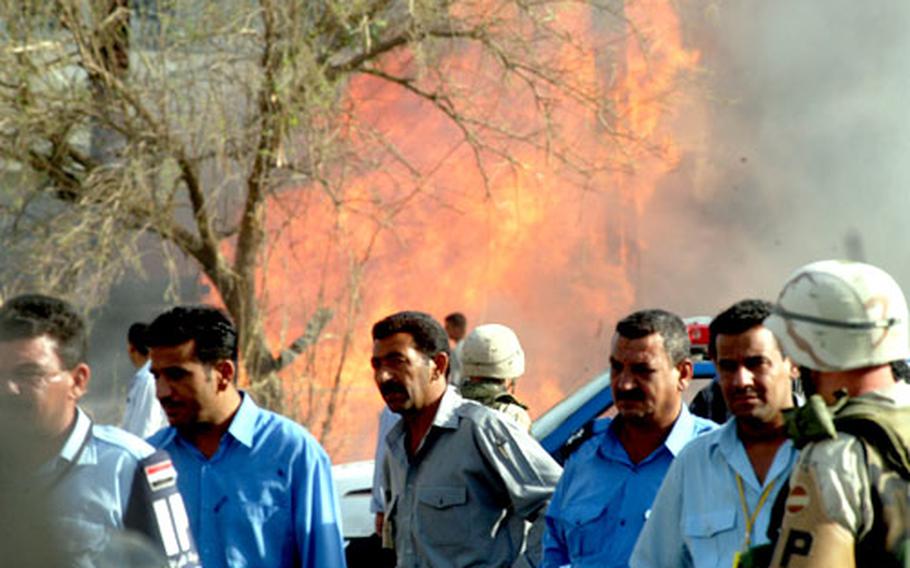 Flames rise from the scene of an explosion Monday morning at the International Committee of the Red Cross in Baghdad. (Ron Jensen / S&S)

Robert Reismann and Thomas Bowman, who are in the Iraqi capital to oversee the printing and distribution of the newspaper, were unharmed in the attack that killed an American lieutenant colonel and wounded 15 other people.

Bowman, a former soldier, was asleep when he heard the first rocket hit the hotel, and then saw the second round of rockets on its way from the improvised portable launcher about 550 yards away.

Yelling &#8220;incoming&#8221; to alert others, Bowman left his second-floor room and sought shelter in the stairwell. He said it was hard to tell how long the barrage lasted. Two seconds can seem like a long time in such a circumstance, he said, but he guessed 20 to 30 seconds.

When it did stop, he heard someone on the third floor yelling for a medic. That&#8217;s where Reismann was staying, so he ran up the steps and banged on his colleague&#8217;s room.

Reismann said he was awake and about to get out of bed when he heard the rockets slam into the hotel. He rolled under his bed for protection and heard something &#8212; perhaps a rocket that didn&#8217;t explode &#8212; skid along the floor outside his room.

They both raced back down the stairs that were by then covered in the blood of the wounded being taken away.

Bowman used some of his soldier&#8217;s lifesaving training to help until medics arrived, checking for mass bleeding and trying to calm the injured. He got blankets from the reception desk to make them comfortable and warned others not to give the injured any water, which many were doing.

The hotel has been emptied, but Bowman and Reismann said officials have said they will be back there in three or four days.

Reismann said he hopes the security measures have improved by the time they return to the hotel.