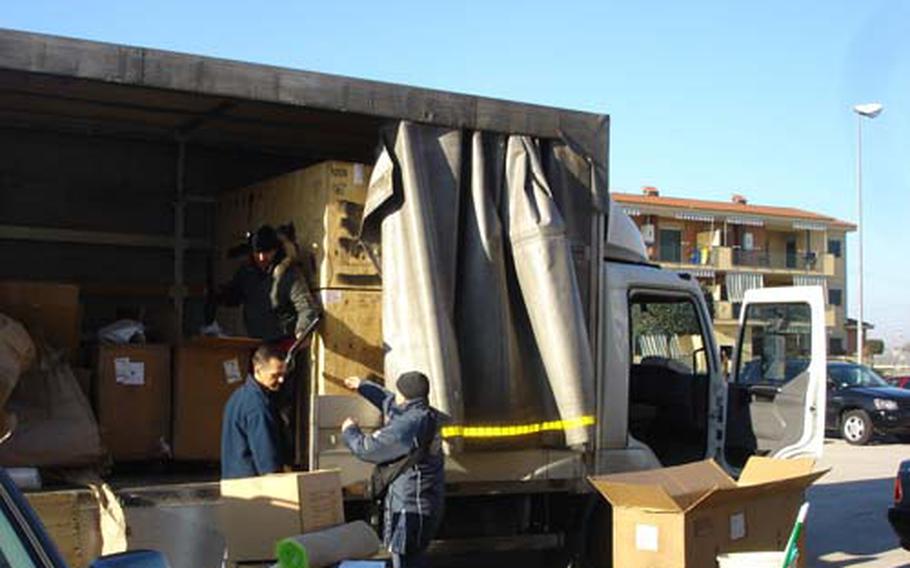 Movers help unload boxes of household goods from a truck in Naples. A rash of personal property thefts last year left many Naples, Italy, residents uneasy about moving their household goods. Multiple layers of prime contractors and subcontractors makes it difficult to track down who is responsible for lost items and how to discipline them. (Lisa Novak / S&S)

NAPLES, Italy &#8212; Moving day is hectic under the best of circumstances. Imagine the added stress of worrying about getting ripped off by the moving company.

Several families had their household goods stolen after transferring to and from Naples. Other residents are now worried that their goods might not make it to their new homes.

"We are extremely stressed out about it," said Holly Reinoehl, a military spouse due to leave Naples this year. She said she has no confidence in getting a fair settlement for stolen or destroyed property, and even if she did, some of her possessions are irreplaceable.

"We were sent here to serve, but we had no idea that it would cost us everything meaningful and dear to us," Reinoehl said. "We are constantly told about safeguarding government property, but why isn&#8217;t the government safeguarding our property?"

When Pascale and Greg Schreiner transferred from Naples to the States in October, they said goodbye to friends and co-workers. Little did they know they were also saying goodbye to many of their personal belongings. They sent one shipment to be stored, and a smaller shipment to their new home in Arizona. When that shipment arrived, they were stunned.

"We opened the crate, and all of our stuff was gone but our recliner chair and a destroyed broken computer chair," said Pascale. "It was so heartbreaking &#8230; my clothes, our kitchen stuff, electronics, books, furniture &#8230; even the Christmas decorations."

When Debbie Moors arrived in Naples last May, her household goods shipment seemed intact &#8212; until she began to unpack.

"All of the boxes had been opened, with items stolen from each box," Moors said. "It was obvious that the boxes were repacked. As they were opened, things started falling out. One box had nothing in it but an oven thermometer."

Moors said she called a local customs inspector who verified the boxes had been opened before they were delivered.

What the Schreiners, Moors and many others had in common was Rosy Packing, a Naples-based moving company used by several U.S. contractors.

Since the military does not track or evaluate the local companies that actually handle the moves, "this further reduces claims&#8217; visibility at MCO or other adjudication offices," she said.

The local personal property office in Naples would not provide any information on how widespread the problem with Rosy Packing was, saying only that individuals had to go through the Navy Legal Claims office in Virginia if they had any unresolved issues.

Navy officials said Rosy Packing was used by various contractors for more than five years. The company apparently went out of business last year; efforts to contact it for this story were unsuccessful.

"[Rosy Packing] subcontracted for us for maybe two years," said Dean Cummings, who runs AAAA Forwarding, based in Clearwater, Fla. "It&#8217;s hard to find a subcontractor that you can trust. You almost have to trust until you find out that they&#8217;re doing something wrong."

Under the new system of full replacement value instituted last year, individuals go directly to the prime contractor if they want to file a claim for loss or damage. If customers aren&#8217;t satisfied with the settlement, they can pursue the claim through a military claims office, which only settles claims based on depreciation value.

When individuals discover lost or damaged items, they fill out a DD1840 form to document the condition of those items. These forms are also used to evaluate the companies involved with the move.

"Once the 1840 is filed, PPSO takes immediate action," said Lt. Cmdr Anthony Barger, director of the Naples branch of the Fleet and Industrial Supply Center, Sigonella.

The PPSO can issue a letter of warning to the prime contractor, stating that if another incident occurs, the contractor receives a 30-day suspension. But it is up to that prime contractor to deal with the moving companies it hires, not the military.

Barger said he was advised by his regional director not to talk about any specific moving companies, so he couldn&#8217;t offer any perspective or scope on why Rosy Packing was able to get away with the property of so many servicemembers.

Despite his confidence in the system, Barger said he highly encourages everyone to purchase insurance. He also said the problems in Naples may be an issue of perception based on the reputation of Naples as a high crime area.

For individuals who have lost personal possessions to Rosy Packing or other companies, the problem is very real.

&#8220;When we arrive in Naples, servicemembers are given briefs on how corrupt things are in the area and to expect to be robbed at some point during our stay,&#8221; said Jonathan Palmer, another victim of Rosy Packing who left Naples in October. When his household goods arrived in Connecticut, about half of his belongings had been stolen.

He said he was satisfied with his settlement from his claim, but that more needs to be done to safeguard servicemembers&#8217; belongings.

&#8220;Someone is not doing enough, there isn&#8217;t enough oversight. There&#8217;s no way for us to rid this area of corruption, that&#8217;s for the Italian government, but whoever is supposed to be taking care of the servicemember needs to do something more.&#8221;