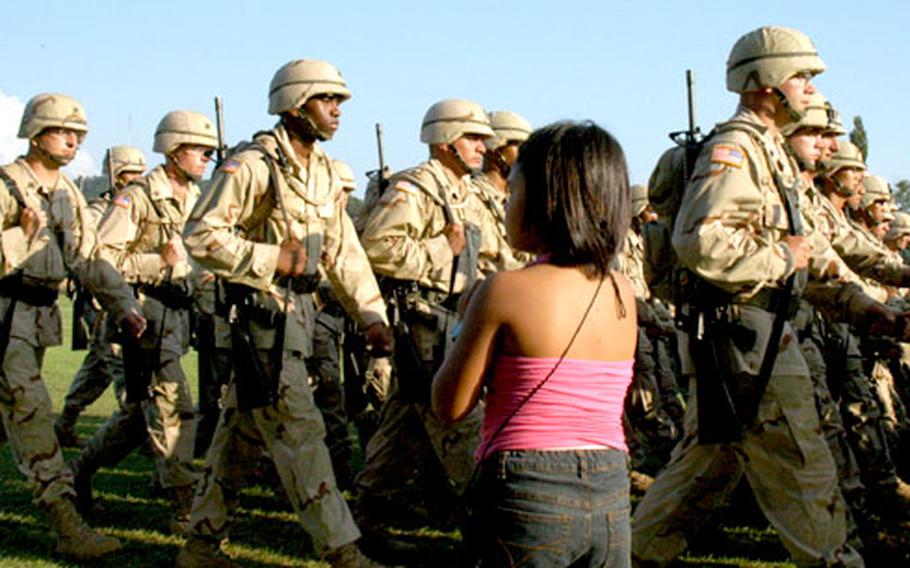 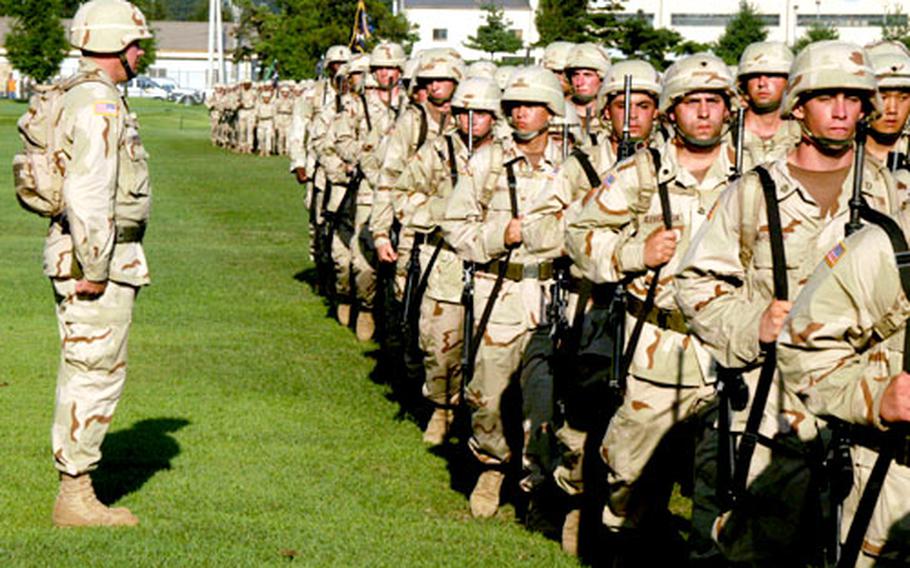 Several thousand soldiers from the Combat Team, known as the Strikeforce, sweltered in their desert camouflage uniforms (DCUs) under a blazing sun, as friends and families watched from grandstands by the 2nd ID parade ground.

Danielle Kishbaugh&#8217;s husband, Staff Sgt. James Kishbaugh of Company B, 2nd Battalion, 72nd Armored Regiment, was one of those standing nearby. Asked how she felt about saying goodbye, his wife burst into tears.

Kishbaugh left the couple&#8217;s two young children back home in the United States to spend a few days saying goodbye to her husband in South Korea, but she said she did not get much time with him because he was so busy preparing for the mission.

Two privates first class heading to Iraq with Strikeforce, Robert Middleton and David Paredes, both of Headquarters and Headquarters Company, 1st Battalion, 9th Infantry Regiment, said they expect to spend a lot of time together in the desert.

The pair already has spent a year as roommates in South Korea, they said. In their spare time they play pool, kick a soccer ball around, watch movies, play video games and shop for clothes. However, they do not expect to shop for clothes much in Iraq. &#8220;We won&#8217;t be able to wear them anyway,&#8221; joked Middleton, who expects to wear his DCUs every day for the next year.

Also saying goodbye was 9-year-old Jordan Bialek, whose father is 2nd Brigade executive officer Lt. Col. Bob Bialek. She wore a heart-shaped American flag pendant that her father gave her, but appeared too shy to say much about her feelings other than that she was &#8220;kind of sad.&#8221;

Her mother, Jeannie Bialek, said she already had said goodbye once to her husband during the first Gulf War.

While the families watched, the soldiers carried unit colors, stood in formation and were saluted by artillery. Division commander Maj. Gen. John R. Wood addressed them.

The soldiers of Strikeforce spent almost every waking moment, since they learned of their mission, preparing for a different environment, a different enemy and a different type of war , Wood said.

&#8220;They have mastered new skills in tough individual and unit training, over long hours and through terrible weather, under the scrutiny of trained observers and to the highest possible standards. They have been measured and found ready,&#8221; he said.

No force in the U.S. Army started training for a mission more ready to fight or finished so skilled to succeed, Wood told the soldiers.

&#8220;Shortly, they will pick up that last bag, give that last hug, shake that last hand and deploy far from their home to fight for freedom and help others enjoy the blessings of peace,&#8221; Wood said.

For more than 50 years, U.S. soldiers have stood strong with their South Korean allies against the tyranny of North Korean threats, he said. Now, the commander added, the soldiers of Strikeforce are the promise of a new future for a distant land.

&#8220;A land that is only now beginning to understand the freedom that this alliance protects so well and our people cherish so dearly. It is my fervent prayer that in the future, the Iraqi people will remember when freedom was new and hope was just beginning. They will remember how these men and women &#8230; made that dream a reality,&#8221; he said.

After Wood&#8217;s speech, the Strikeforce soldiers marched past their leaders and well-wishers to loud cheers and applause.

The soldiers had a look of steely resolve, as if there were Iraqi insurgents waiting for them at the far end of the parade ground. One soldier caught himself smiling but quickly resumed a serious look.

Once soldiers acclimatize, they will &#8220;get themselves organized and take the fight to the enemy,&#8221; Patton said.

After the parade most soldiers headed for a block party at the Camp Casey Golf Club that included live music, free food and fireworks.

But others headed for transport bound for Osan Air Base and military-chartered flights to the Middle East.