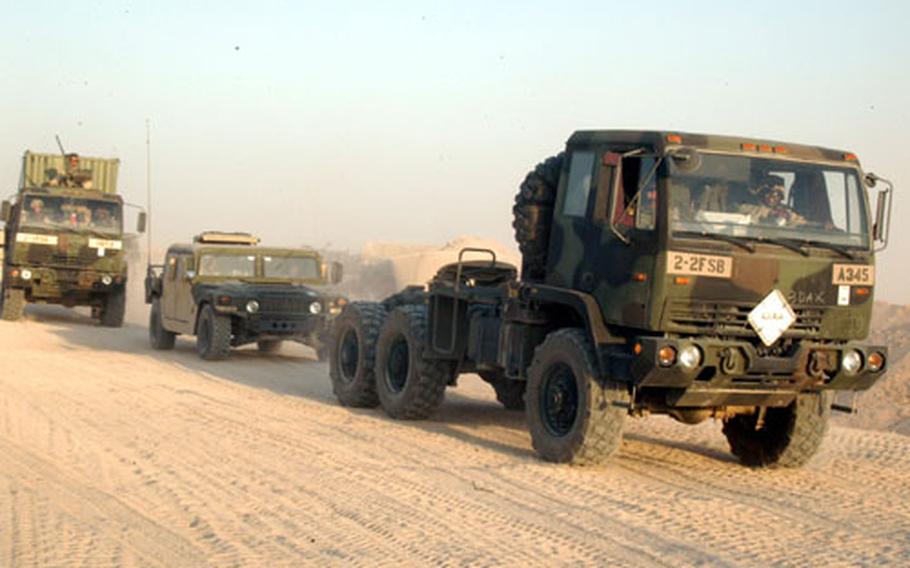 Soldiers from the 2nd Foward Support Battalion reach the end of an exhausting three-day convoy to their new home in Iraq. (Seth Robson / S&S)

The 2nd Infantry Division has hit the ground in Iraq after convoys and airlifts moved thousands of soldiers and vehicles from temporary bases in Kuwait over the past week.

The effort to move the soldiers and equipment was the culmination of months of training and a mammoth logistical operation to shift Strike Force&#8217;s 2nd ID&#8217;s 2nd Brigade Combat Team&#8217;s 3,600 soldiers and 1,800 vehicles to Iraq from bases near the South Korean demilitarized zone.

Spearheading the convoy effort were soldiers from the 2nd Forward Support Battalion, who left Camp Buehring, Kuwait, on Aug. 25 for their new home in Iraq.

The first stop along the way was Navistar, a U.S. logistical base just south of the Iraqi border. Here the vehicles fueled up and soldiers got a few hours&#8217; sleep on top of their vehicles before their early-morning departure.

One of the soldiers, Spc. Deidre Parks, 20, of Philadelphia, rode shotgun on a palletized loading system full of ammunition. The young soldier said she was excited to start her first deployment in a combat zone.

&#8220;You hear all these stories about Iraqis attacking convoys. When we crossed the border we were getting ready for it. You hear about convoys being attacked every day so you prepare yourself for the situation that could happen. You are always on high alert,&#8221; said Parks, who kept a keen lookout for roadside bombs as the convoy moved up the road, retracing the route to Baghdad that coalition invasion forces followed last year.

Each time the vehicles traveled under an overpass M-249 SAW gunner, 2nd Lt. Michael Kofman, 22, swiveled the turret on his Humvee 180 degrees to defend against an attack from above.

Kofman, who was born in St. Petersburg, Russia, before moving to the States at 10 years old, is a fire support officer with 2nd Battalion, 17th Field Artillery Regiment but volunteered to man a SAW in the convoy so he could see more of southern Iraq. He was just as excited as Parks to be in country.

&#8220;I was in my senior year of college studying political science and attending [Reserve Officer Training Corps] when the Iraq invasion happened last year. I was watching it on television, and I was pretty jealous of the guys over there. They were doing the real Army thing, and I was stuck back in college,&#8221; he said.

The first thing Kofman noticed after crossing the border was the difference between Iraqi cars and Kuwaiti vehicles.

The convoy&#8217;s next stop was Cedar 2, a U.S. base near Najaf, where Marines still were battling rebels. The base looked much the same as Navistar but there was one important difference &#8212; air- conditioned tents where the soldiers could sleep until the next morning.

During the night there was a change in plans. Commanders learned that, instead of taking the usual route north, the convoy was to travel an alternate route through an inhospitable wasteland to the west.

The last day&#8217;s journey was the most challenging and took the convoy along a one-lane strip of asphalt that snaked deep into Iraq&#8217;s western desert. At mid-morning the convoy had a &#8220;security stop&#8221; and vehicles pulled off into the sand on either side of the road.

Soldiers took up defensive positions and scanned the desert for signs of insurgents. They could see people foraging among the sand dunes for some unknown commodity, and soon children approached the vehicles to beg for food and water.

Sgt. Jesus Gonzalez, of 177th Finance Battalion, gripped his M-16 and stared at the horizon.

Another soldier pulling security, Sgt. Carl Green, 40, of Pontiac, Mich., was ready to shoot to kill if any insurgents showed themselves. Last time he was in Iraq, Green survived a car bomb that wounded scores of his buddies from 101st Airborne at Talafar, he said.

Two of the 2nd FSB trucks got stuck in the sand, and soldiers had to dig and tow them out, but within an hour the convoy was back on the road, which seemed to stretch on forever. There were no restroom breaks and soldiers relieved themselves in Gatorade bottles or cut-off water containers while they drove.

The desert is so vast that at times the vehicles appeared to be stationary. A strange optical illusion made it appear as if the closest rocks and bushes moved one direction, and rocks and bushes near the horizon moved the other.

When the convoy passed a small town, children ran out to the side of the road giving the thumbs-up sign and holding up empty water bottles in the hope that something might be thrown from a vehicle.

Even in this wasteland there were signs of economic activity. Trucks shifted rock from a quarry, farmers tended small fields around oases, and, near a large evaporating lake, people piled up large salt mounds that glistened in the sun beside the road.

In other places, there was evidence of the rich harvest that flows beneath the sand &#8212; oil that seeped up like blood through a bandage to form black pools on the ground.

There was evidence of past battles also: wrecked military equipment rusting in the dust, bullet-riddled concrete signs that may have once born portraits of Iraq&#8217;s former ruler Saddam Hussein. Collapsed buildings marked the journey&#8217;s end.

As the tired soldiers rolled into the camp where they will spend the next year, they marveled at the sand- filled barriers erected to ward off enemy attacks and the strange, twin- tailed Iraqi aircraft on display nearby. Strike Force asked Stripes not to reveal the name of the camp or its location in this story.

One soldier was so exhausted and dehydrated from the move that medics put him on an intravenous drip.

For one 2nd FSB soldier, Sgt. Jaimee Torres, 24, of Puerto Rico, it was a homecoming of sorts. He served there on one of two previous Iraq tours.

Torres said there were many improvements at the camp, including Moral, Welfare and Recreation facilities for every company based there, more air conditioning and better force protection.

&#8220;The most you will see here is a mortar attack here or there. Small arms fire doesn&#8217;t really happen. It is much safer than Fallujah,&#8221; he said of his previous assignment with the 82nd Airborne Division.

&#8220;I got about two or three hours last night because I was PMCSing the vehicle,&#8221; he said of the preventive maintenance checks and services soldiers must do before using a vehicle.

Sleep may have been a factor in three minor accidents and roll overs on other convoys that left one soldier nursing a broken wrist and another with a broken nose, an official said. By the time the last vehicle arrived on Tuesday morning, Strike Force reported only one direct fire attack and no roadside bomb attacks on its convoys.

&#8220;That is testament to the great maintenance program that started in South Korea and continued once the vehicles came off the boat,&#8221; he said.