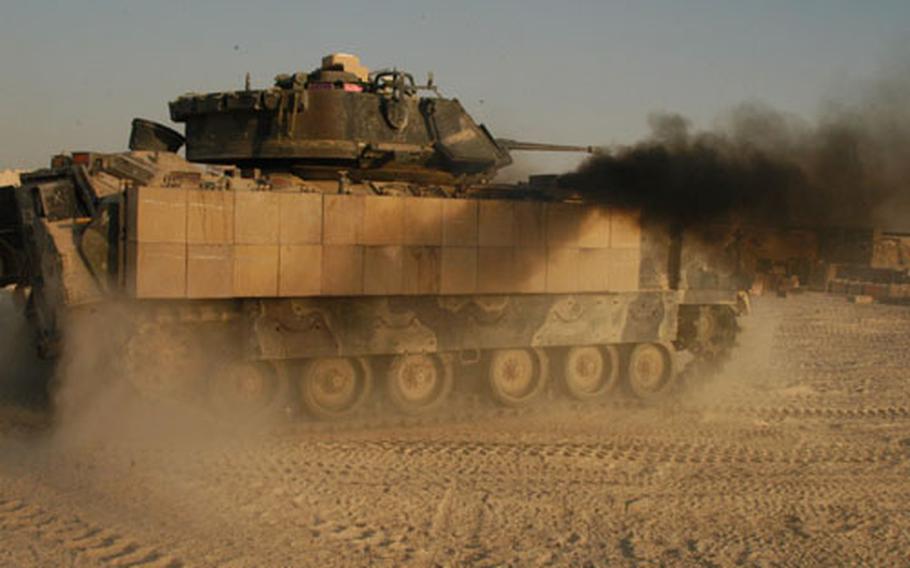 One of the Manchus&#39; Bradley fighting vehicles prepares for action in Iraq across an area of operations that covers 6,000 square kilometers of desert. (Seth Robson / S&S)

One of the Manchus&#39; Bradley fighting vehicles prepares for action in Iraq across an area of operations that covers 6,000 square kilometers of desert. (Seth Robson / S&S) 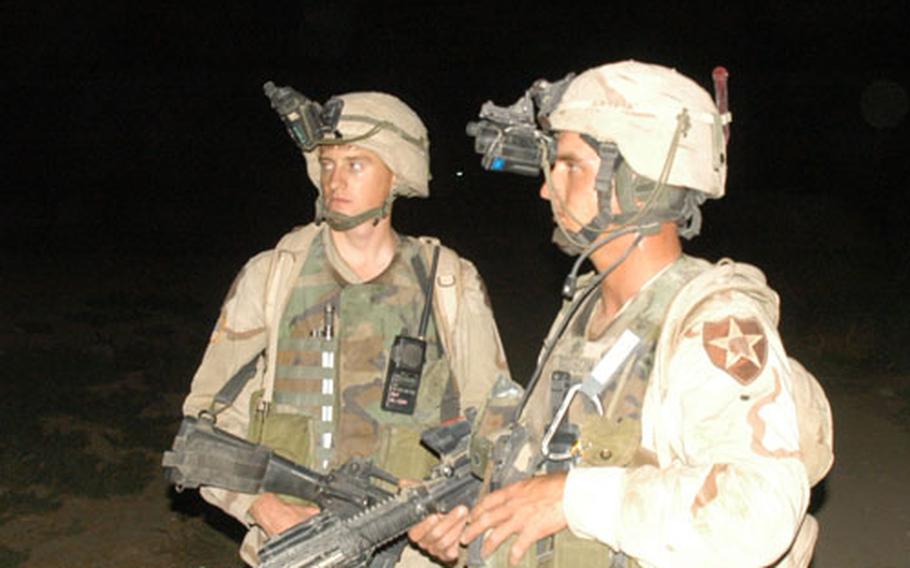 From left: Sgt. George Womack, 27, of Mount Vernon, Wis., (unit information withheld at the request of Strike Force) and Mitch Dodson, 25, of the 2nd Infantry Division&#39;s Company C, 1st Battalion, 9th Infantry Regiment, and of Elsmore, Kan., patrol in the dark in the Manchus&#39; new area of operations in Iraq. (Seth Robson / S&S)

WESTERN IRAQ &#8212; The Strike Force Manchus are preparing to take control of roughly 3,500 square miles of desert &#8212; one of the largest areas of operations in Iraq.

The soldiers from 1st Battalion, 9th Infantry Regiment, 2nd Infantry Division, known as the Manchus because of their service in China during the Boxer Rebellion of 1901, began patrols in Iraq last week.

Strike Force, the 2nd ID&#8217;s 2nd Brigade Combat Team, which includes the Manchus, has asked Stars and Stripes not to reveal the exact location of its units for security reasons.

However, the Manchus&#8217; commander, Lt. Col. Joseph Southcott, said 1-9&#8217;s area of operations is a vast expanse of desert that does not include any large cities.

&#8220;We have small villages and towns. but no major urban areas. The biggest feature we have is a main supply route that bisects our area of operations,&#8221; he said.

The Manchus&#8217; primary mission is to provide security and freedom of movement along the route, he said.

The unit responsible for security in the area over the past year has done an excellent job to minimize attacks on the road, he said.

&#8220;Prior to their mission, they had experienced a solider being injured or a vehicle damaged every other day,&#8221; he said.

Now more than 100 days have passed without a successful attack, he added.

Insurgents have been forced away from the main supply route, according to military officials.

Their main form of attack now is to plant improvised explosive devices on side roads to target U.S. patrols, Southcott said.

The bespectacled commander experienced this up close on his first patrol in Iraq when an IED blasted the last Humvee in his convoy into a canal, injuring two Marines in a joint force, he said.

&#8220;For everybody in the patrol it was very instinctive. As soon as it happened there was no doubt what it was. You pull over, dismount, pull security, treat the wounded and search the area,&#8221; he said.

Last Saturday night, several of Southcott&#8217;s soldiers got their own chance to check out the area, patrolling through a small village alongside another unit.

The soldiers rolled out in a convoy of Humvees, using night vision goggles to drive 50 mph along a dark six-lane freeway.

The vehicles stopped at an observation post overlooking the main supply route and the soldiers transferred to Bradley fighting vehicles.

When the Bradleys reached the drop-off point, ramps dropped and soldiers stepped into the landscape lit by a pale half-moon.

Instead of the desert that covers much of 1-9&#8217;s area of operations, the soldiers could see thick vegetation including gum trees, palms, tall reeds and fields of native crops.

Farm animals disturbed by the visitors began a chorus of brays, moos and barks that announced their presence to the neighborhood.

Another veteran advised the newcomers that the locals respect only strength. &#8220;We have killed so many insurgents they call this the blood patch,&#8221; he said, pointing to his unit&#8217;s insignia.

The patrol&#8217;s first stop was the local mosque.

Houses lined both sides of the dirt road the soldiers walked down.

A baby cried in the yard next to one of them.

Locals sleep outdoors because it is cooler than sleeping indoors, explained a veteran.

The soldiers stopped outside the largest house in the village. Sgt. Mitch Dodson, 25, of Company C, 1-9, learned the house is home to the local sheik.

The young soldier from Elsmore, Kan., who has never met a sheik, did not get to meet one during the patrol. This sheik, who supports the coalition, was recovering after insurgents shot him, officials said.

Iraq is a pleasant change of scenery after a year and a half in South Korea, Dodson said.

The soldiers cut across some fields and stopped in a palm grove next to a canal full of weeds.

Among the palms stood a tree trunk, sheared of its branches, poking up like a ship&#8217;s mast in the darkness.

A few months ago the tree was blown up by four 155 mm artillery rounds that shattered the front of a Humvee and threw the machine into the canal, injuring two soldiers, the veterans said.

This night&#8217;s visit was meant to illustrate that IEDs are placed on isolated dirt tracks as well as the main roads.

Insurgents knew the soldiers patrolled there and waited for them, the veterans told the Manchus.

Further down the road, the soldiers stopped outside the local high school.

In the darkness it looked much like an American school, complete with a basketball court and graffiti.

The veterans have waged a war of words with locals who write anti-coalition graffiti.

The veterans responded with their own pro-coalition graffiti and eventually challenged their opponents to meet for a showdown.

Unfortunately, the soldiers got diverted to a raid and didn&#8217;t make the appointment, they said.

Last stop was the local market, a collection of tin sheds by the roadside.

The shops had their shutters drawn when the soldiers arrived, but they are a popular hangout for locals during the day, the veterans said.

The soldiers finished the patrol by walking around the edge of a small lake to rendezvous with the Bradleys.

&#8220;We have been preparing for a long time. My soldiers are excited about getting into the area of operations and beginning to conduct our military operations in support of a stable and secure Iraq,&#8221; he said.