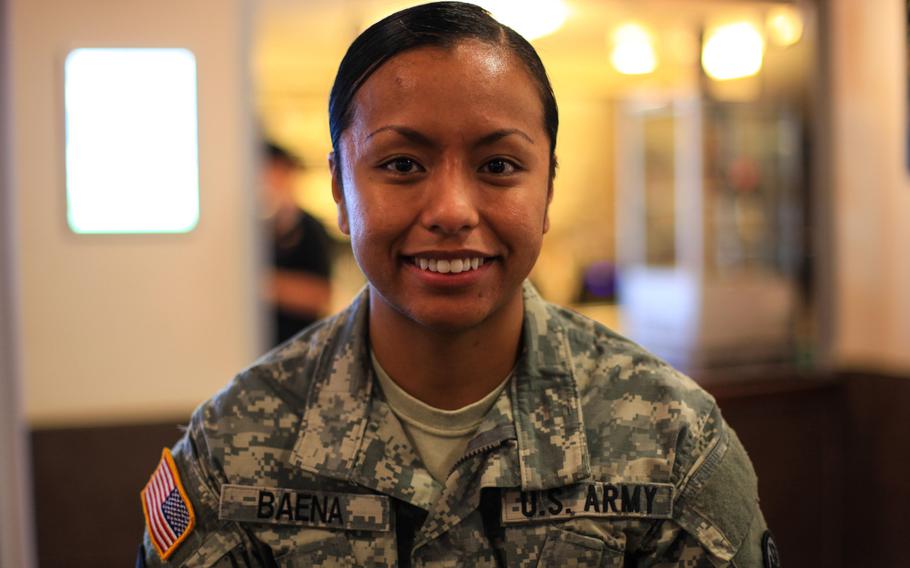 Buy Photo
Sgt. Roseann Baena, a 26-year-old soldier assigned to Europe Regional Dental Command, said she feels safer living in Germany than in the U.S. because of the country's stricter gun laws. (Matt Millham/Stars and Stripes)

Buy Photo
Sgt. Roseann Baena, a 26-year-old soldier assigned to Europe Regional Dental Command, said she feels safer living in Germany than in the U.S. because of the country's stricter gun laws. (Matt Millham/Stars and Stripes) 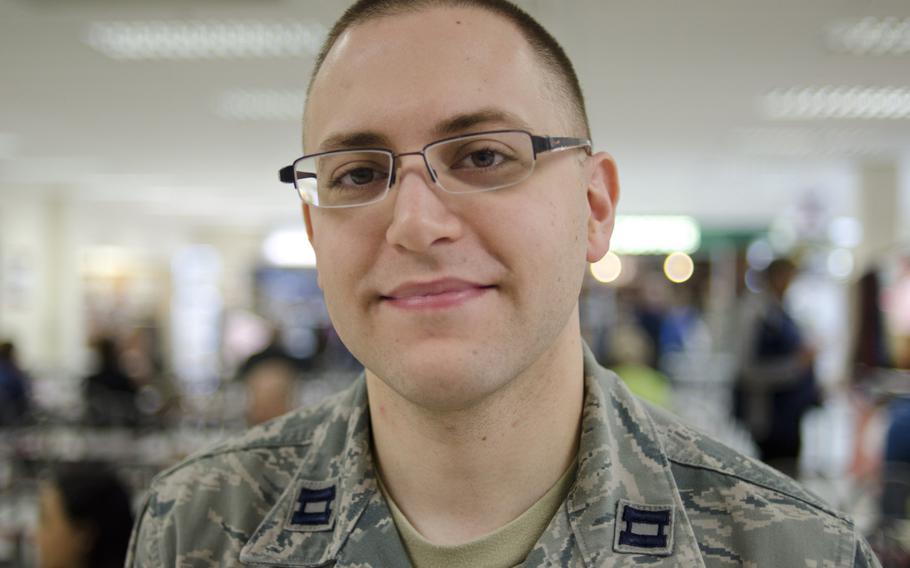 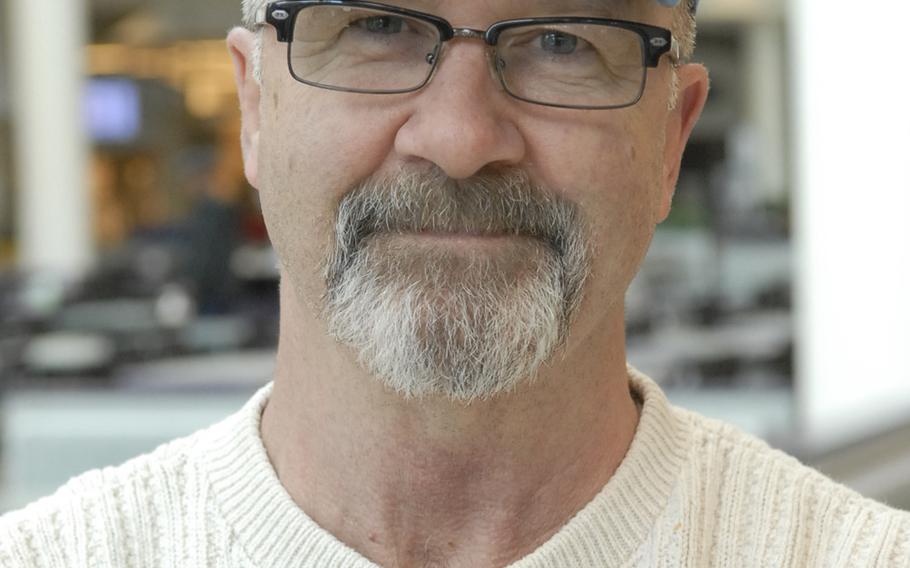 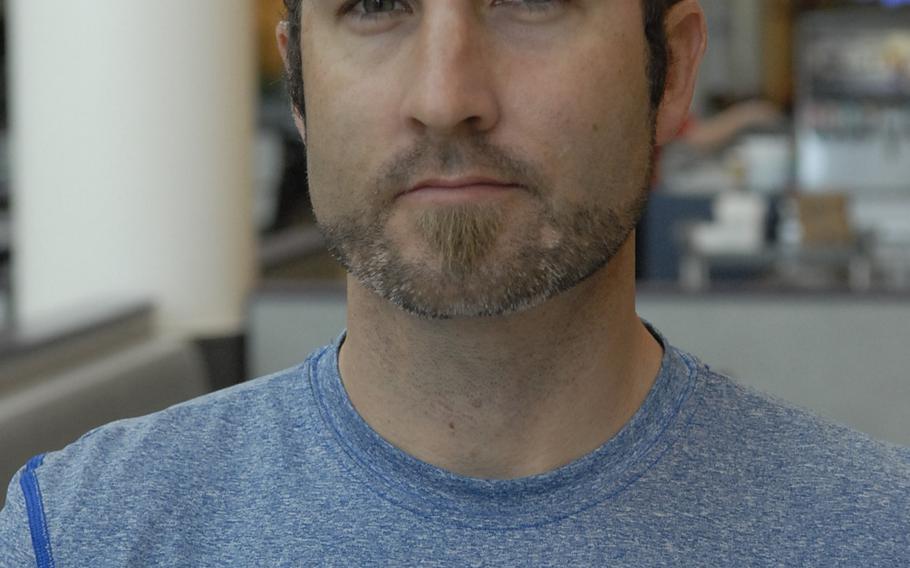 Buy Photo
Michael Folsom Jr., a missionary from Nicaragua visiting his parents in Germany and a former U.S. military dependent from Germany, doesn't think stricter gun laws would prevent the mass shootings such as those at Fort Hood. "There's always going to be a chance that someone is going to go outside the system and break the law." (Jennifer H. Svan/Stars and Stripes)

YOKOTA AIR BASE, Japan — Strict gun laws in foreign countries mean many in America’s overseas military communities feel safer than they would at home, although they’re divided over whether tougher rules would reduce gun violence in the U.S.

“For the most part, I feel safer over here because we’re not allowed to bring guns,” Sgt. Roseann Baena, a 26-year-old soldier assigned to Europe Regional Dental Command in Sembach, Germany, said Tuesday.

Her comment was typical of many overseas personnel interviewed since last week’s mass shootings at Fort Hood, Texas.

In Germany, home to the largest contingent of U.S. servicemembers overseas, firearms licenses that require extensive training and background checks are mandatory for gun owners.

However, Baena, who comes from a family of hunters, isn’t sure restricting guns in the U.S. would be the right response to mass shootings, and she doesn’t want rules that could keep guns away from responsible owners who shoot for sport or recreation.

A handful of American lawmakers and commentators have suggested that arming all soldiers would make them safer, but Baena laughed at the notion.

Michael Folsom, 60, a retired Air Force major and a contractor at Ramstein, said he feels safer walking the streets in Germany than in some American cities.

“I think it’s because of the mentality of the people, and also, I believe there’s more accountability for your personal actions than there is in the United States,” he said.

Folsom’s son, Michael Folsom Jr., a missionary in Nicaragua visiting his parents, said Europe is safer than America because it has more restrictions.

America has more freedom than most places, he said but added: “That freedom also lends itself to someone abusing it.”

Despite the tough gun rules, Germany has had its share of mass killings, including several school shootings by disturbed teenagers in the past decade.

Some at Ramstein pointed to the 2011 Frankfurt airport shooting — in which two U.S. airmen were killed — as an example of the occurrence of gun violence despite strict gun regulations.

“If people have intent to target Americans, they’ll do it, by any means they can regardless of gun laws,” said Air Force Master Sgt. Teressa Newton.

Stars and Stripes’ archives contain only a few reports of firearms-related incidents in overseas military communities in recent years.

In 2007 a sailor shot two co-workers with his service weapon in Bahrain before turning the gun on himself, and in 2008 a soldier in Germany was fatally shot after threatening German police with a service weapon. Last year, U.S. soldiers in South Korea fired a BB gun from a car at local nationals, sparking a police chase and shots from police that wounded a soldier in the vehicle.

In the United Kingdom, where there are almost 800,000 firearms licenses, 146 people were killed by guns in 2011, according to gunpolicy.org, a website hosted by the Sydney School of Public Health in Australia. The organization supports global efforts to prevent gun injury.

U.S. officials at RAF Lakenheath discourage servicemembers from bringing firearms into the country, citing laws that make handguns illegal, and permits for other weapons are difficult to obtain. Those among the 9,000 Americans stationed in England who do bring firearm must store them in an armory if they live on Lakenheath.

The rules are little comfort for some.

“People will find a way to be violent regardless,” said Air Force Capt. Scott Anderson, a psychologist with the 48th Medical Group.

Tech. Sgt. Brad Koch from the 31st Fighter Wing’s Operations Squadron at Aviano Air Base, said he feels “completely safe” in Italy and added that he’d like to see stricter gun laws in the U.S.

“If (someone) has some sort of mental disorder then there should be a law to make it harder for the person with the disorder to gain access to weapons of any kind,” he said.

In Japan, for example, almost 100,000 U.S. military personnel, civilians and family members stationed there are subject to some of the world’s strictest gun laws.

With few exceptions, no one, according to Japanese law, can possess a firearm or sword, the Asia Pacific Law Review says.

Only one Japanese citizen out of 200 owns a firearm, according to gunpolicy.org. In 2008 there were just 11 gun homicides in Japan, a nation of 126 million people, the website says.

Unsurprisingly, U.S. Forces Japan isn’t aware of any on-base incidents, deaths or injuries attributed to firearms on its installations in the past decade, according to USFJ spokesman Lt. Col. David Honchul.

U.S. servicemembers are prohibited from owning or possessing personal handguns in Japan, he said. “As such, they are not allowed to bring them here from the States.”

It is possible for some people to import rifles and shotguns to Japan, but they are severely restricted, and owners must register them and file other documents with the Japanese authorities before they can be imported, Honchul said.

At Yokota Air Base, Japan residents have been watching news of the Fort Hood shootings broadcast over the American Forces Network.

Military retiree Clive Clark, 41, of New Jersey, who’s taking some time off in Japan after a 20-year career, said that he feels safer overseas but that he doesn’t think Japanese-style gun controls would work in the U.S.

“The criminals (in the U.S.) already have guns, and the people who are going to be affected are the ones trying to defend themselves,” he said over lunch at Yokota last Friday.

Another at Yokota, Air Force spouse Tyona Torres, 33, of Clovis, N.M., said she’d like to see limits on access to firearms in the U.S.

“I think they should have gun control,” she said. “There would probably be less shootings.”

However, Torres said there aren’t easy answers to prevent tragedies like the Fort Hood killings.

“If the guy who did this was having mental health issues or (post-traumatic stress disorder), if he didn’t reach out for help, how does anybody know to help him?”