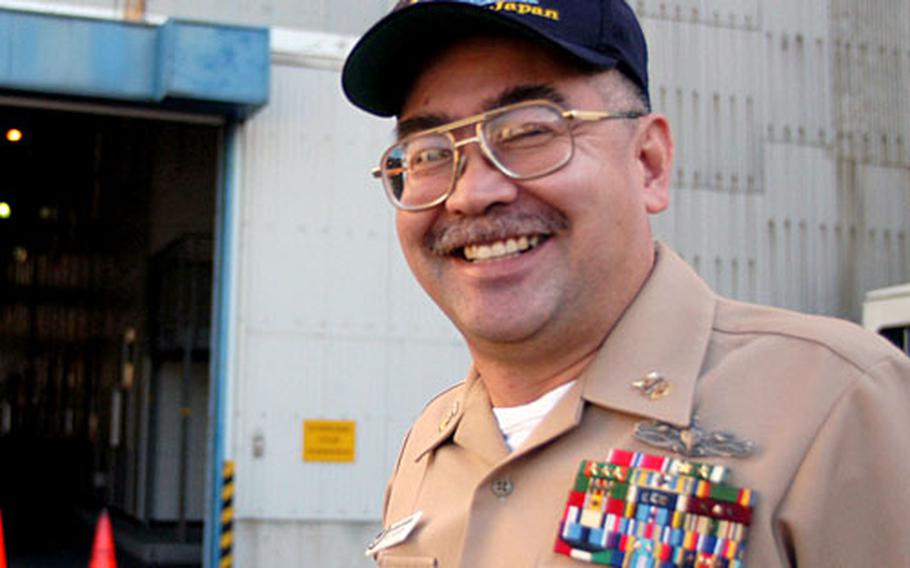 Master Chief Petty Officer Danny Schneider, a storekeeper, was about a year from retiring from the Navy when he volunteered for a six-month tour in Iraq. The senior enlisted adviser at Defense Distribution Yokosuka Japan earned the Bronze Star Medal for his service there. (Allison Batdorff / S&S)

YOKOSUKA NAVAL BASE, Japan &#8212; Supplies aren&#8217;t the sexy part of the military. Usually, the folks driving the tanks get the glory, not those working the phones to find replacement parts when a tank breaks down.

Schneider was just a year from retiring from the Navy when he volunteered to go to Iraq. The senior enlisted adviser at Defense Distribution Yokosuka Japan has worked in the Navy 30 years. He is scheduled to retire in August 2006.

His &#8220;logistical expertise&#8221; came in handy, resulting in a 10 percent overall increase in unit readiness, according to Gen. Maj. Paul E. Mock in a DDYJ news release.

Schneider was embedded with the 1st Marine Expeditionary Force. His charge with the Defense Logistics Agency: Keep critical supplies flowing to the Marine and Army divisions in the Sunni triangle. It entailed a convoy ride every other Tuesday to a supply maintenance meeting in Ramadi.

But working in a hostile ground environment is a far cry from his 17 years spent on ships, Schneider said.

The Bronze Star was created in 1944 to honor combat valor or meritorious service. Schneider received the award Nov. 22 in a ceremony at Yokosuka Naval Base.