Buy Photo
Concrete tetrapods, each weighing between eight and 25 tons, on the beach at Rota. (Ted Rohde / ©Stars and Stripes)

Buy Photo
Concrete tetrapods, each weighing between eight and 25 tons, on the beach at Rota. (Ted Rohde / ©Stars and Stripes) Buy Photo
Construction continues on the new $120 million base at Rota. (Ted Rohde / ©Stars and Stripes) 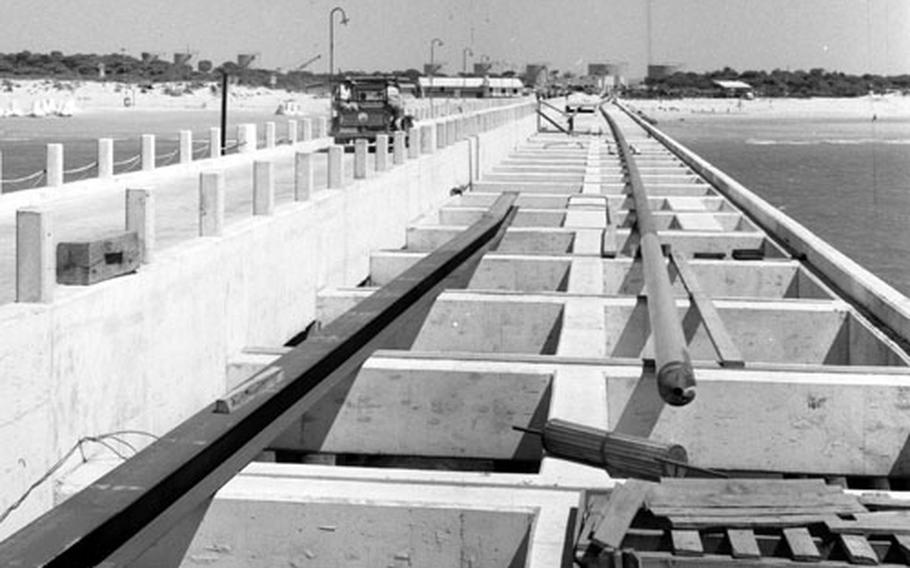 Buy Photo
The new pier, with a fuel line leading into the base. (Ted Rohde / ©Stars and Stripes) 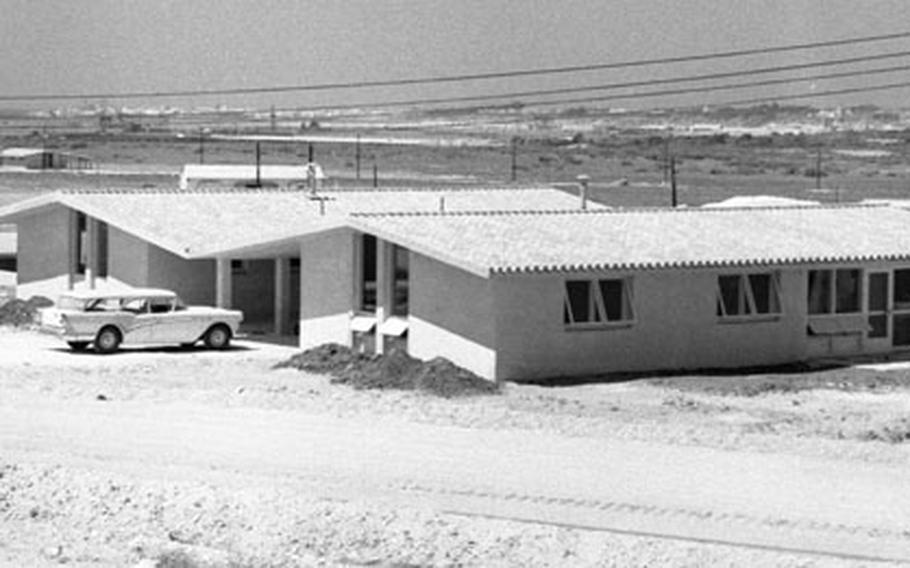 Buy Photo
Dependent quarters at Rota. Most of the houses were duplexes. (Ted Rohde / ©Stars and Stripes)

THE U.S. Navy's largest and most important European installation is rapidly talking shape on a sprawling, 6,000-acre tract in the lush vineyard region of southern Spain.

Situated across the bay from Cadiz, near the sleepy fishing village of Rota &mdash; from which it takes its name &mdash; the $120 million Rota Naval Base will have as major components a naval air station, a fuel terminal, off-loading pier and stowage facilities, ammunition bunkers and harbor facilities capable of handling the largest and most modern ships afloat.

Its strategic location near the southern tip of the Continent, facing on the Atlantic and immediately accessible to the Mediterranean, determines its value as a supporting base in the event of emergencies in North Africa, Europe or the Middle East.

Providing for the direct support of naval forces operating in the Mediterranean was one of the considerations in choosing the construction site, according to Navy Capt. Norman C. Gillette, Jr., commander of the naval complex at Rota.

The U.S. 6th Fleet will continue to operate as it has in the past &mdash; without direct reliance on bases in the area &mdash; but the presence of naval facilities nearby will make resupply less of a time-consuming problem.

Although the base is in a partially completed state, with most buildings and facilities still under construction, the military community &mdash; numbering slightly more than 450 &mdash; has been functioning as the advance echelon of the future base.

As with all Spanish bases being built by the U.S., the Rota base was planned and construction schedules geared to the early completion of elementary fueling, aviation, administration, supply and housing, with full-scale refinements slated for the future.

To date the base is prepared to handle jet and heavy transport aircraft, including carrier-based planes, take on fuels for the 485-mile pipeline through a temporary underwater discharge line, and conduct basic administrative and supply requirements.

Of the first contract for 162 family-type quarters, 14 are occupied and the remainder are expected to be ready for families in the next few months.

Dependent housing is one of the most critical problems in the vicinity of the naval establishment. Budget slashes have curtailed the on-base quarters program and suitable off-base housing is difficult to find, primarily because there are no large towns near the base.

Queer contraptions which originated in the brains of Frenchmen are being fabricated and dumped into the ocean at Rota to make the Atlantic more pacific.

Constructed of concrete and resembling jacks which might have been used by a young Paul Bunyan, these odd-appearing objects are called tetrapods. They are built on the site and deposited in the water washing the projected 3;000-foot marginal wharf that forms an artificial-harbor in the outer reaches of the Bay of Cadiz.

Nearly 10,000 of these "schmoos," as Gillette calls them, ranging from 8 to 25 tons each will be used to break up wave action and absorb a maximum of the ocean's eroding energy.

Inside the marginal pier and breakwater will be space for at least two ships of the mighty Forrestal class plus additional dock facilities to accommodate smaller ships and tankers that bring POL products to the protruding, T-shape fuel pier. Here, at least two tankers can discharge cargo simultaneously.

A tow-way connecting the wharf with the naval air facility will permit planes flown to Rota to be towed onto the dock and hoisted to the deck of carriers or vice versa. Planes operating with the fleet can land at the Rota facility should they be unable to make it to their carrier and, by the same token, planes lost in combat at sea could be replaced by aircraft flown from Rota to the ships at sea.

The prime role of the Rota base at present is receiving seaborne fuel cargoes, storing them in huge underground tanks or transferring required fuel products to the adjacent Air Force pumping station which starts the fuel moving to the four Strategic Air Command bases linked by the 485-mile "Trans-Iberian" pipeline.

Physically the U.S. portion of the naval base, Rota is divided into three major operating areas. (The Spanish also have facilities there and the whole area is under Spanish command).

The three areas are the Naval Air Station under Gillette, the fuel depot under Cmdr F. B. Goodspeed, Jr., and the naval magazine for ammunition stowage.

Construction of the gigantic enterprise is controlled by Cmdr Rob C. Gordon, and the contract is a joint U.S.-Spanish endeavor.