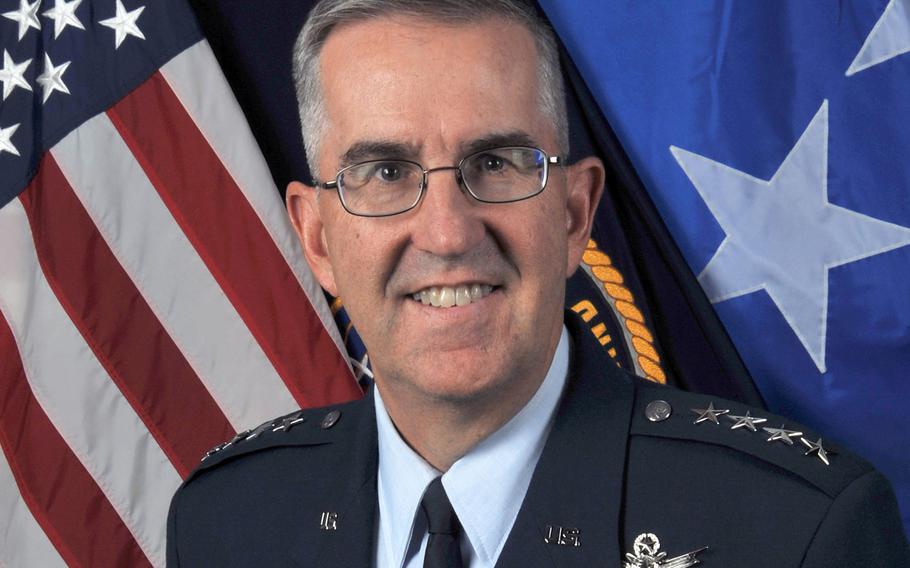 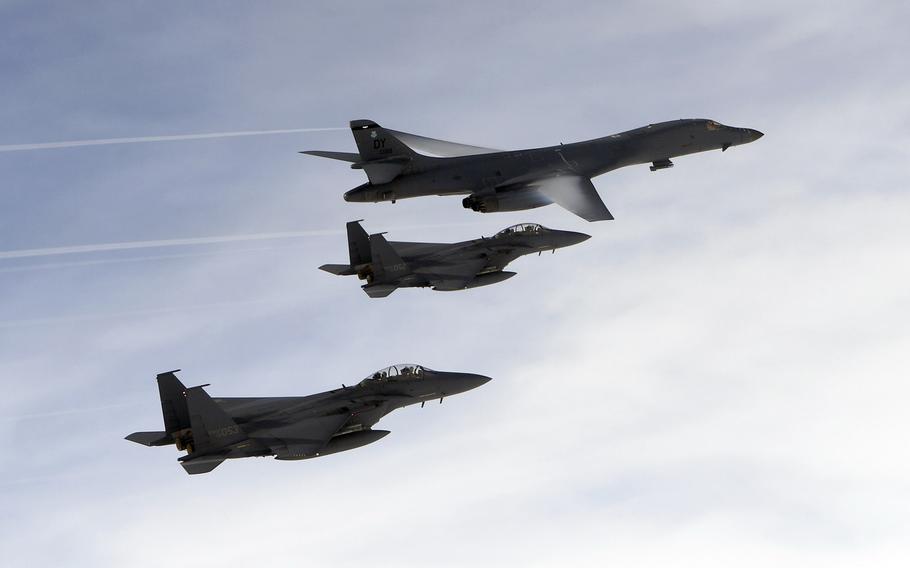 A U.S. Air Force B-1B Lancer assigned to the 9th Expeditionary Bomb Squadron, flies with South Korean F-15 fighter jets over the Korean Peninsula, on Friday, July 7, 2017. The mission was in response to a series of increasingly escalatory actions by North Korea, including a launch of an intercontinental ballistic missile on July 3. (Photo courtesy of Republic of Korea Air Force) “Kim Jong Un has gone very fast, and we have to step up and go fast in response,” Hyten said in an interview with Stars and Stripes on Sunday. “We are not going fast. We are so risk-averse that we only test every 18 months.”

Hyten suggested the U.S. could draw lessons from Kim’s willingness to fail.

Concerns continue to mount about Pyongyang’s next move in the wake of its test earlier this month of a new intercontinental ballistic missile.

Over the weekend, the U.S. sent a pair of bombers to the region in a show of force, carrying out a mock bombing run on a South Korean airfield.

“The country of North Korea has the capability now that is a threat to the United States, and we have to be able to figure out how to deal with that,” Hyten said during a stop in Stuttgart, Germany, where he was to meet with U.S. European and Africa Command leaders.

North Korea’s attempts to develop a smaller nuclear warhead, coupled with a long-range ICBM, have prompted some analysts to estimate that Pyongyang could have a nuclear platform capable of hitting the U.S. within two years.

Hyten contrasted North Korea’s testing program with U.S. testing programs, which tend to be wary of the publicly known failures that Kim seems to shrug off.

“If you want to be able to respond to a threat that is going fast you better be able to figure out how to go fast,” Hyten said. “You sometimes learn more from failure than you do from a success ... We have somehow forgotten that.”

Questions were raised about the American SM-3 Block IIA missile, which is designed for the Aegis system, when one failed to hit a target in Hawaii last month.

But Hyten said that lessons will be learned that move the technology forward.

There has been fierce debate in Washington about the viability and cost of various missile defense systems.

The U.S. has spent billions of dollars on both the Aegis system and the Terminal High Altitude Area Defense system, or THAAD.

In response to North Korea and a more aggressive Russia, STRATCOM, which manages the deployment of America’s long-range bombers, has put the military’s most-lethal aircraft on steady rotation. In recent weeks, B-1, B-2 and B-52 bombers have carried out missions in the Pacific and Europe.

“We have so many capabilities that are high-demand, low-density assets that we have to divide it up,” he said. “We can’t be everywhere all the time by ourselves, so we have to work together with our allies.”

In Stuttgart, Hyten was slated for talks Monday with EUCOM and AFRICOM leaders before heading to France, Greenland, England and Scotland, where the U.K. has a nuclear submarine base.

STRATCOM possesses a range of high-end war fighting capabilities that could be used in a potential Russia conflict. Besides handling the U.S.’s nuclear triad, STRACOM is involved in electronic warfare, cyber and space operations.

“My big concern is not really today,” Hyten said. “We have old equipment, and if we don’t modernize a lot of that equipment it’s going to be a problem 10 or 20 years from now.”

Efforts underway to modernize the military’s nuclear program are not yet where they should be, according to Hyten.

“Unfortunately, we should have started paying that bill 10 or 15 years ago and we wouldn’t have found ourselves in the position we are now,” he said.

In 2006, Russia announced a complete modernization of its force.

“And our modernization is just getting started,” Hyten said. “So if we are going to continue to deter Russia, which is where deterrence starts because they are the other great nuclear power in the world, then we have to make sure we modernize our forces, which is a stress on our budget.”

Though STRATCOM currently has sufficient resources, the high pace of operations is “stressing on the force,” Hyten said.