Storyteller gets on Yongsan kids’ level to teach coping skills 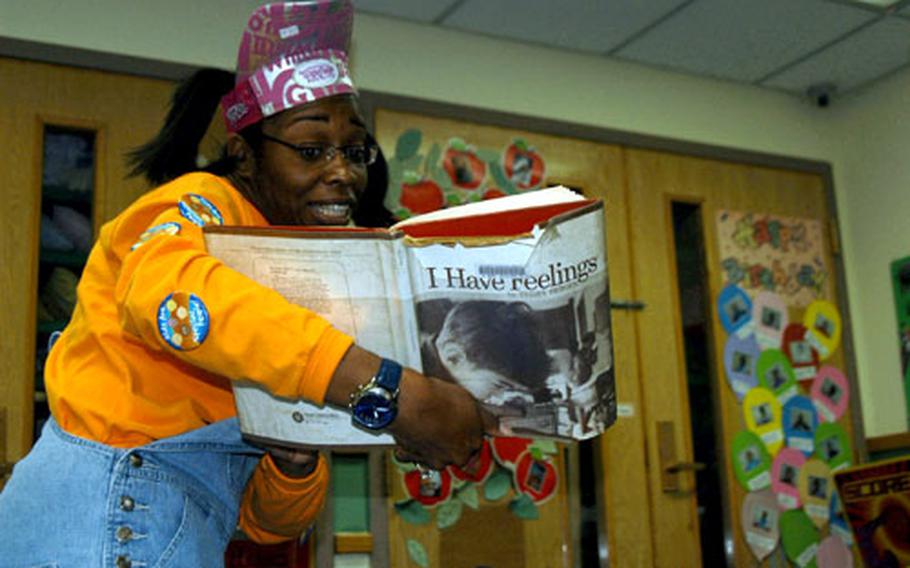 "Penelope" reads a book about feelings to a group of pre-schoolers Friday morning at the Child DevelopmentCenter on Yongsan. Penelope is a character played by Sarah Gibbs, a victims&#39; advocate for the Family Advocacy Agency at Yongsan. (Teri Weaver / S&S)

"Penelope" reads a book about feelings to a group of pre-schoolers Friday morning at the Child DevelopmentCenter on Yongsan. Penelope is a character played by Sarah Gibbs, a victims&#39; advocate for the Family Advocacy Agency at Yongsan. (Teri Weaver / S&S) 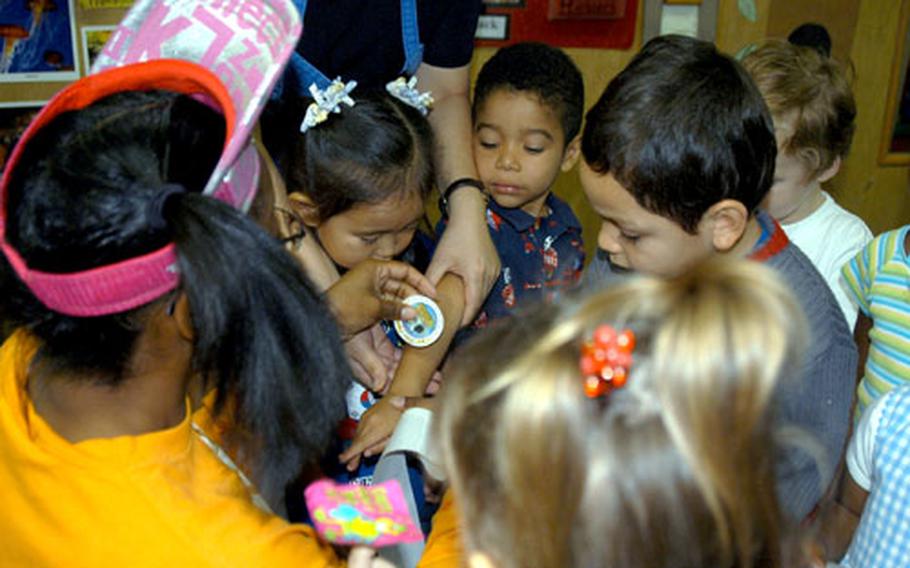 Children clamor to get a sticker from Penelope. (Teri Weaver / S&S)

YONGSAN GARRISON, South Korea &#8212; &#8220;Penelope&#8221; is in the fourth grade and has trouble getting her ponytails even and keeping both hooks on her overalls fastened.

Yet she has no problem making friends with younger children and getting them to listen to and talk about serious and sensitive things. During her story times, she reads from books about feelings, touches and reactions &#8212; those that are good and those that are bad.

Penelope is really Sarah Gibbs, an adult who has years of experience in teen shelters and crisis intervention groups for children and adults. Since December, she&#8217;s been the victim advocate emergency placement care coordinator for the Family Advocacy program at Yongsan.

About a month ago, she got the idea to create Penelope as a way to talk to children about issues such as anger, stress, feelings and even abuse.

So far, the technique has proved popular. She&#8217;s been to the Child Development Center on Yongsan several times and has been working with the Seoul American Elementary School to start a story-time series this year.

Dr. Joan Islas, assistant principal at the school, said she welcomed Gibbs&#8217; story times as a way to help children learn about their own feelings. She also said hearing a Penelope story can help children know that they are not alone if there is a problem.

Gibbs doesn&#8217;t solicit specific information from the children during story times. Instead, she uses the sessions to talk about behavior: how it can feel to be excited, to be scared.

Gibbs will lead four stories throughout the school year at the elementary school about abuse, self-esteem, anger and stress. The sessions will be for kids in kindergarten through third grade.

The first session, about abuse, or more specifically domestic violence, will be in October because it is domestic violence awareness month. Parents must give consent for their kids to participate and parents are welcome to attend the story times, Islas said.

Gibbs said she has heard no reports of serious incidents or cases of abuse during the few weeks she&#8217;s been doing Penelope storytimes.

On Friday, the shy &#8220;yeahs&#8221; soon disappeared into kids scrambling to get close to Penelope and get a sticker from her.