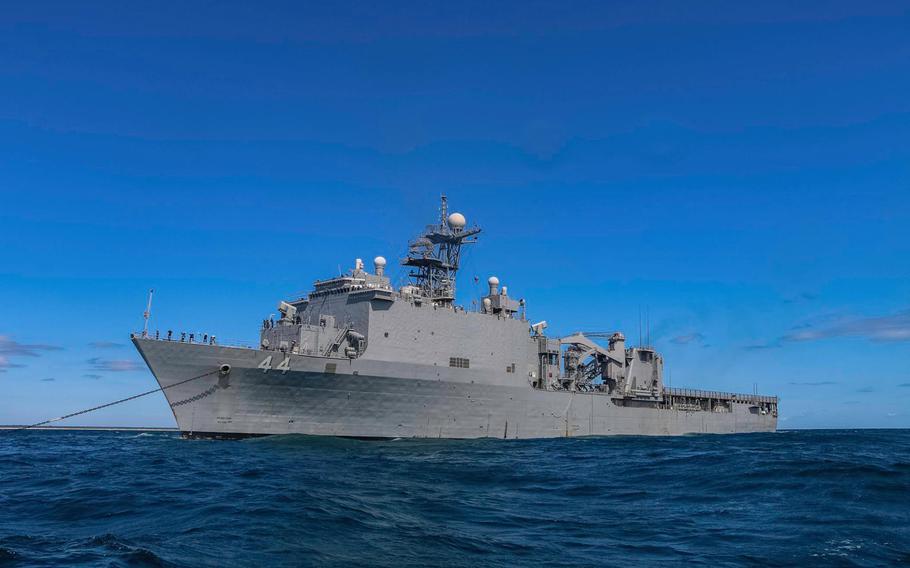 The USS Gunston Hall was damaged by rough seas earlier this week while participating in NATO exercise Trident Juncture in the North Atlantic. (Courtesy of U.S. Navy)

Rough seas near Iceland damaged a section of the USS Gunston Hall and injured some sailors, forcing the ship and the USS New York to dock in Reykjavik earlier this week.

The sailors were treated for minor injuries and returned to duty following the incident Monday, according to a 6th Fleet statement.

The Gunston Hall and New York pulled into Reykjavik both as a precautionary measure and to allow crews to assess damage to the Gunston Hall’s well deck and landing crafts, the Navy said.

The Gunston Hall, New York and USS Iwo Jima — all dock-landing vessels — stopped in Iceland on the way to the NATO exercise Trident Juncture in the North Atlantic. The Iwo Jima continued to the mainly Norway-based exercise, which was scheduled to begin Thursday with an estimated 50,000 servicemembers from all 29 NATO countries taking part.

Navy leaders were still determining on Thursday whether the ships could eventually participate in the exercise. They were also reviewing how they would carry out simulated amphibious assaults and ashore drills with the 24th Marine Expeditionary Unit while using fewer ships, said Cmdr. Kyle Raines, 6th Fleet spokesman.

Reacting to unexpected weather-related problems adds an element of realism, Raines said, because these situations can arise during a combat mission.

“It’s all part of our learning,” Raines said. “These are factors that stress planners, but stress them in a good way.“

Amphibious assaults can’t be launched from the damaged Gunston Hall, but some personnel and equipment might be transported to shore to participate in the land-based part of the drill, Raines said.

The three vessels were among the 65 ships scheduled to participate in the naval portion of Trident Juncture, the largest NATO exercise since the Cold War. The USS Harry S. Truman Carrier Strike Group has been operating in the Norwegian Sea in advance of the exercise.