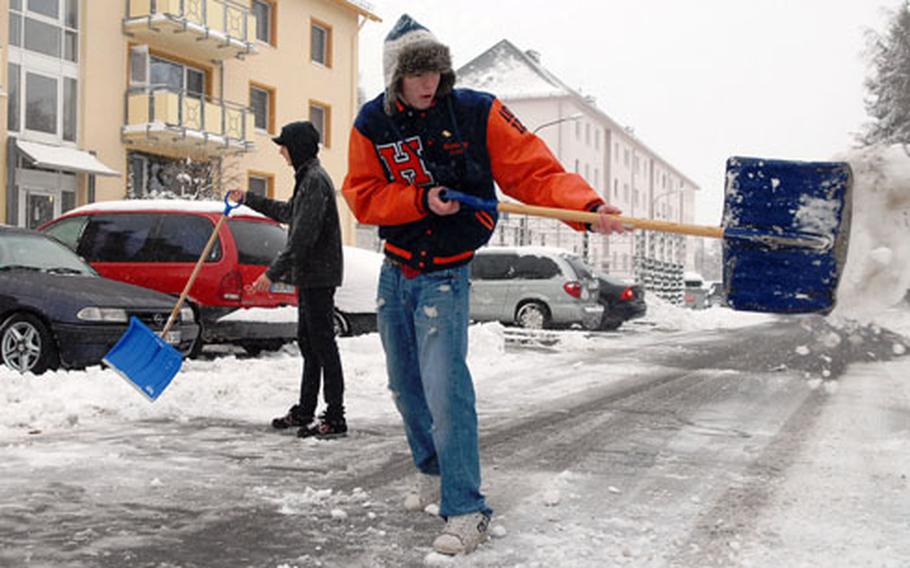 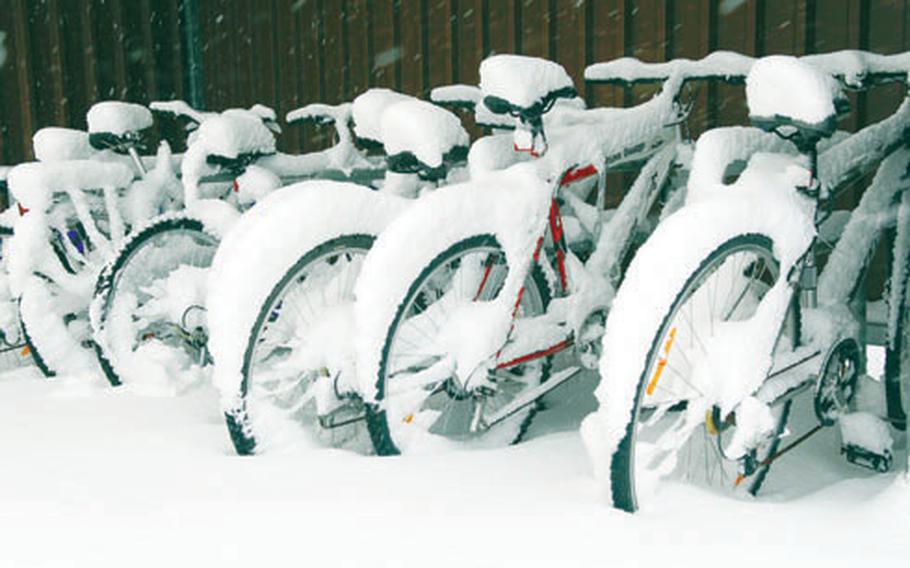 Snow piled up on a row of bicycles parked at Smith Barracks in Baumholder. () 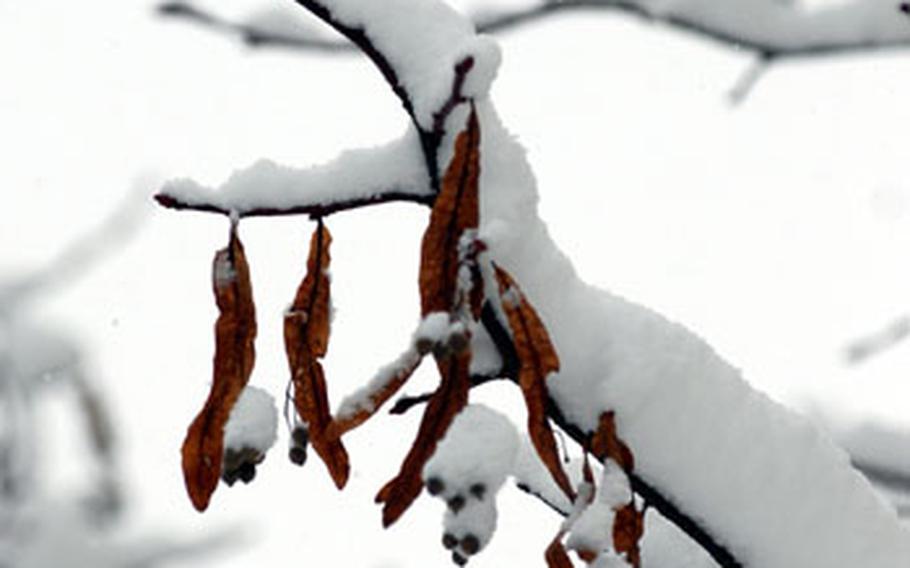 Snow covers the branches of a tree in Baumholder. () 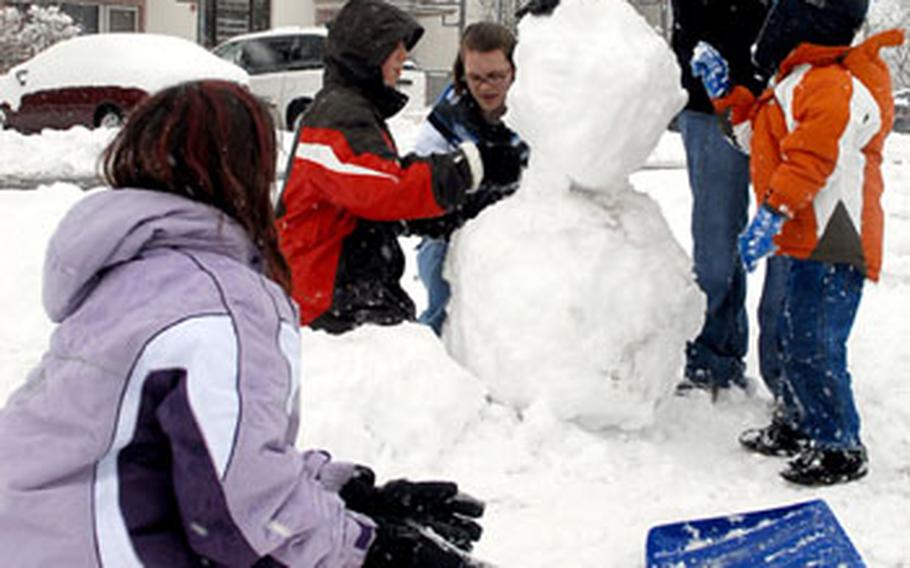 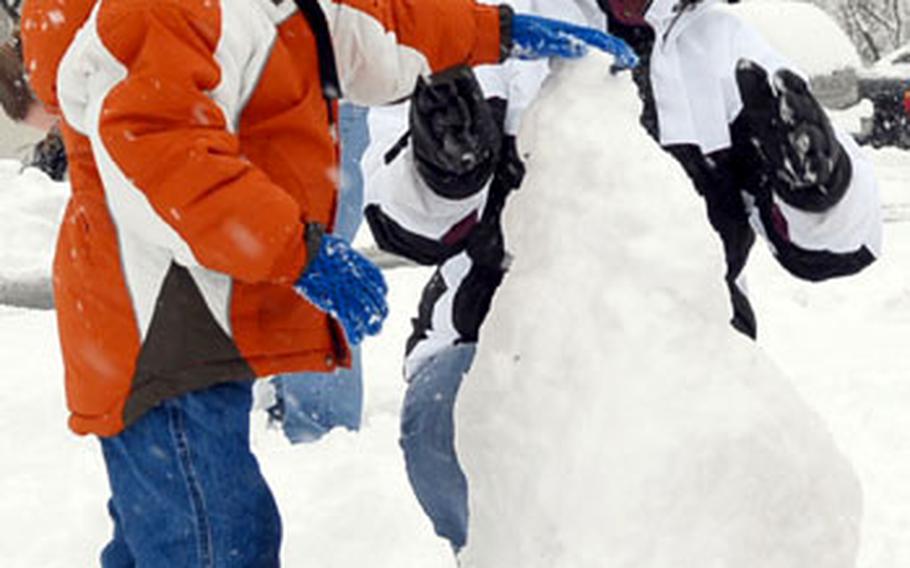 Christopher Wilson and his mom, Amber, build a snowman in Baumholder’s Wetzel housing area. After living in Texas and Oklahoma, she said that it was their first snowman. ()

Winter came early Wednesday morning with the first heavy snowfall of the season in western Germany.

The snow and freezing rain slicked roadways causing at least one bus accident, and children were happy as buses were delayed and schools closed early.

"I can&#8217;t say that there wasn&#8217;t a parent somewhere that was inconvenienced," said Maggie Menzies, spokeswoman for Department of Defense Dependent Schools Europe. "I can say no complaints have come to the attention of this office."

There was one serious incident, though, when a bus carrying children veered off the roadway in Boerrstadt, a small town about 15 miles north of Kaiserslautern. The bus was traveling around a bend about 7:35 a.m. when it slid off the shoulder and into a ditch, Menzies said. No children were injured.

But, in the morning, "we picked up whoever was out there," said Ignacio Rubalcava, spokesman for the U.S. Army Garrison in Baumholder. "And we put out a message that if your kid is at home, keep him at home."

At RAF Mildenhall in England, people who live on base had to scrape ice off their windshields and windows to see before they headed to work. And a thin layer of frost blanketed the grass around the base.

Officials said the wintery weather did not affect flight operations at Air Force bases in Ramstein, Mildenhall and Lakenheath.

Sweepers cleared the runway at Ramstein, and an alert was issued to motorists to be careful on the slick roadways, said Kilian Blumlein, spokesman for the 435th Air Base Wing.

In Buchel, Germany &#8212; some 60 miles east of Spangdahlem Air Base &#8212; about four inches of snow fell, according to Capt. Jeremy Reynolds, of the 21st Operational Weather Squadron.

Reynolds said freezing temperatures helped the snow stick to streets and sidewalks. The snow should cease the rest of the week, but the chilly temperatures will remain with lows in the upper 20s.

Many residents might have been surprised by old man winter&#8217;s early arrival.

"In the past two years, we haven&#8217;t seen this much snow," Reynolds said. "It could be the start of a snowy season."

Stars and Stripes reporter Mark Abramson contributed to this report.