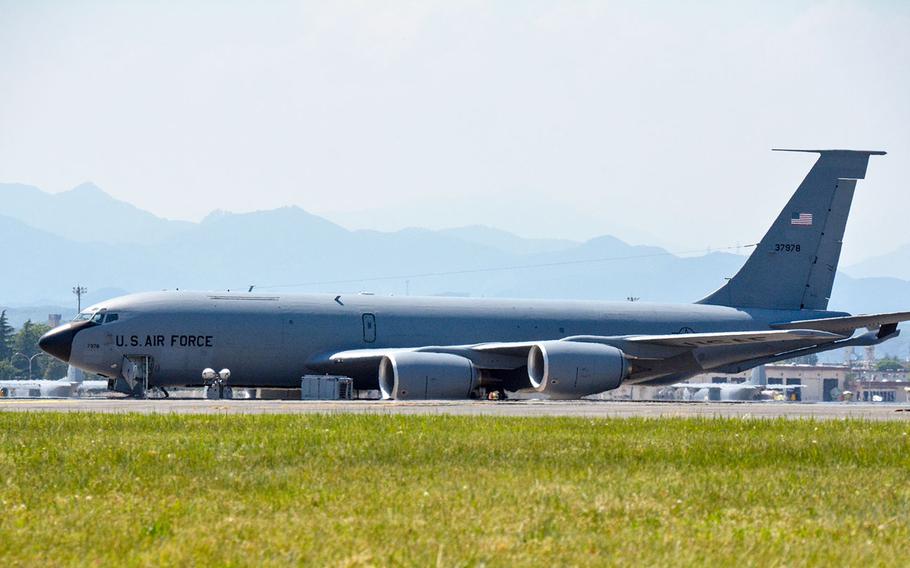 FORT SHAFTER, Hawaii — The Air Force is assessing damage to aircraft at Andersen Air Force Base caused by Tropical Storm Maria as it passed over Guam Thursday.

“Operations continued after recovering from the immediate impacts of the storm,” said Capt. James Moore, a spokesman for Pacific Air Forces headquartered in Honolulu, in a statement Monday.

“Damage assessments are ongoing,” he said. “No fleets have been grounded.”

Moore declined to answer questions about the decision to leave aircraft in place on Guam. Outside the base, the island experienced some flooding and electrical outages from the tropical storm but no serious damage or injuries.

Andersen’s 36th Wing referred questions about the damage to PACAF.

Defense News reported that an unspecified number of KC-135 refueling tankers were damaged in the storm.

After passing Guam, Maria morphed into a full-fledged typhoon by the time it reached Okinawa Tuesday morning.

In anticipation of the storm’s arrival, 18 F-15 Eagle fighters and 8 F-22 Raptor stealth fighters were moved from Okinawa’s Kadena Air Base to Yokota Air Base in Tokyo.

Moore declined to answer questions about the decision to leave aircraft in place on Guam, which experienced some flooding and electrical outages from the tropical storm but no serious damage or injuries.

Mayors’ Council of Guam executive director Angel Sablan questioned the decision to keep the level at 4, the Post said. Sablan said that the condition level gave the public “a false sense of safety” and did not prompt the opening of any storm shelters.

The Air Force is in the process of building a divert field on the island of Tinian, about 120 miles north of Guam, which could provide a handy site for relocating aircraft from Andersen.

It would become the only divert airfield in the Western Pacific “and provide the U.S. Air Force the capability to conduct either temporary or sustained refueling operations from an additional location in the region,” former chief of staff of the Air Force Mark Welsh said in 2016 when the site was selected. “It will also give us another location to use when supporting contingency or natural disaster responses in the region.”