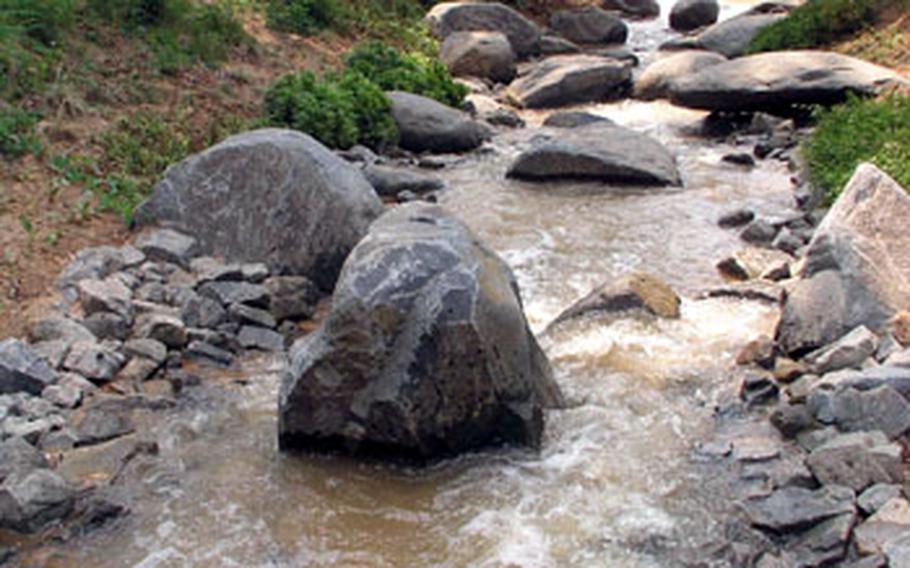 At Camp Humphreys, a new storm water retention basin also serves as a scenic spot where soldiers and others can relax amid trees, flowers and water flowing over rocks. (Franklin Fisher / S&S)

CAMP HUMPHREYS, South Korea &#8212; A new catch basin built to help Camp Humphreys control the flow of storm water is doing double duty as a scenic, wooded spot where people can get away for a little quiet.

The basin takes up about one acre at the post&#8217;s Beacon Hill Park, catching storm water from off-post and from Beacon Hill.

The site consists of two brook-like cuts where water rushes over large gray rocks and into the basin. Footbridges span the brooks, and benches are set in among the trees.

On a sunny Thursday afternoon, a soft breeze rustled the leaves and birds chirped steadily over the noise of the flowing water. The sounds of a passing Apache attack helicopter barely disturbed the tranquility.

The basin will help the post in several ways, according to David W. Johnson, chief of the public works department&#8217;s environmental division at U.S. Army Garrison-Humphreys.

Storm water will flow into the basin instead of out onto grounds and roads below Beacon Hill, which helps curb flooding.

And heavy dirt particles and debris will drop to the bottom of the basin instead of clogging the post&#8217;s drainage system.

In addition, basin vegetation helps filter pollutants from the water, such as those found in fuels and lubricants.

But for others at the base, the new basin can serve a different purpose.

"It adds another nice spot for people to go and relax and maybe enjoy a little peace and quiet," said Bob McElroy, garrison spokesman.

Construction on the $750,000 basin began in February and finished this month. It was built by a South Korean firm under contract with the U.S. Army Corps of Engineers. The deck, bridges and benches are made of recycled material, and the fountain&#8217;s lights and water pump are solar-powered.