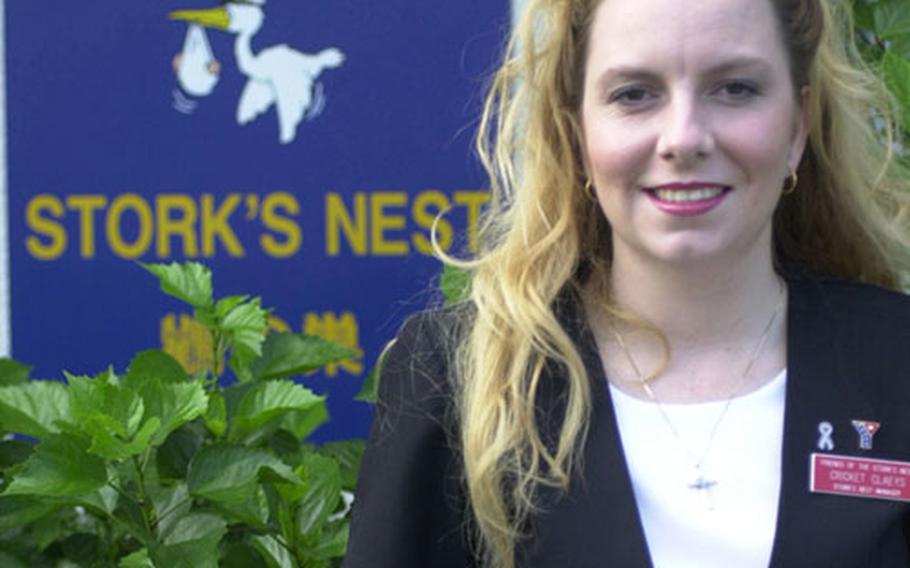 She and her husband, Jason, also a hospitalman at the time, were the proud parents of twin boys, but there was a problem &#8212; Brett and Brandon were premature at 30 weeks and weighed less than 3 pounds each.

To receive proper care, the boys were admitted to the Neonatal Intensive Care Unit at the Medical University of South Carolina hospital in Charleston. But there was little support available for the couple. They had nowhere to stay and living in a hotel was too costly.

Cricket Claeys made the 90-minute drive each way to visit their young sons every day. Her experience led her to jump at the chance to work at Okinawa&#8217;s Stork&#8217;s Nest on Camp Lester.

The Stork&#8217;s Nest consists of two homes on Camp Lester that provide free lodging for women who have high-risk pregnancies or will be giving birth to multiple babies, which are usually born premature. The nest also houses parents of babies in the U.S. Naval Hospital&#8217;s NICU, the only military facility of its kind in the Far East.

Each house has four bedrooms and two bathrooms. Temporary residents share the kitchen and living-room areas. Each bedroom features a television, VCR and small refrigerator. The rest of the house has all the comforts of home, including a computer with Internet access.

Most residents are from off-island locations, but there is the occasional family member of a patient from northern Okinawa, who stay there so they&#8217;re closer to the hospital, Claeys said. The Stork&#8217;s Nest is open to all active-duty servicemembers, Department of Defense employees and their family members.

Residents often remain for the duration of their pregnancies, or until they&#8217;re cleared to fly home. Expectant mothers sometimes stay at the Nest until they reach a certain week in their pregnancy, Claeys said, when the doctors clear them to fly home to give birth.

The average stay is three months, she added.

While there, they have to follow the rules, the most important of which is to get lots of rest, Claeys said. That&#8217;s why no children are allowed.

Esperanza Caoagas was sent to the Stork&#8217;s Nest in her 26th week of pregnancy because of pre-term contractions. She has two children at Naval Air Facility Atsugi, Japan &#8212; Kristen, 8, and Ephraime, 4 &#8212; who are being taken care of by their father, Petty Officer 1st Class Napoleon Caoagas.

Esperanza says she talks to her children every day, and they always ask when she&#8217;s coming home. She can&#8217;t wait to get home, which should be after reaching her 35th week.

Another resident, Airman 1st Class Shanbrica Jones, of Misawa Air Base, Japan, is in the 28th week of her first pregnancy and due to have twins.

She said she was nervous about coming to the Stork&#8217;s Nest.

Claeys doesn&#8217;t just focus on providing shelter for the women. She tends to all their needs, giving them rides to appointments, the exchange and commissary, while delivering emotional support. She once stood in as a witness in a wedding.

Once a Stork&#8217;s Nest resident gives birth and the baby is healthy and discharged, the family has to leave the facility. If continued care is needed at the hospital, other billeting arrangements are made.

The Friends of the Stork&#8217;s Nest, a nonprofit volunteer board that meets once a month, operates the houses. The program relies solely on donations and is supported by more than a dozen Okinawa organizations. Support ranges from meals provided by various spousal organizations to a van donated by the Armed Services YMCA.