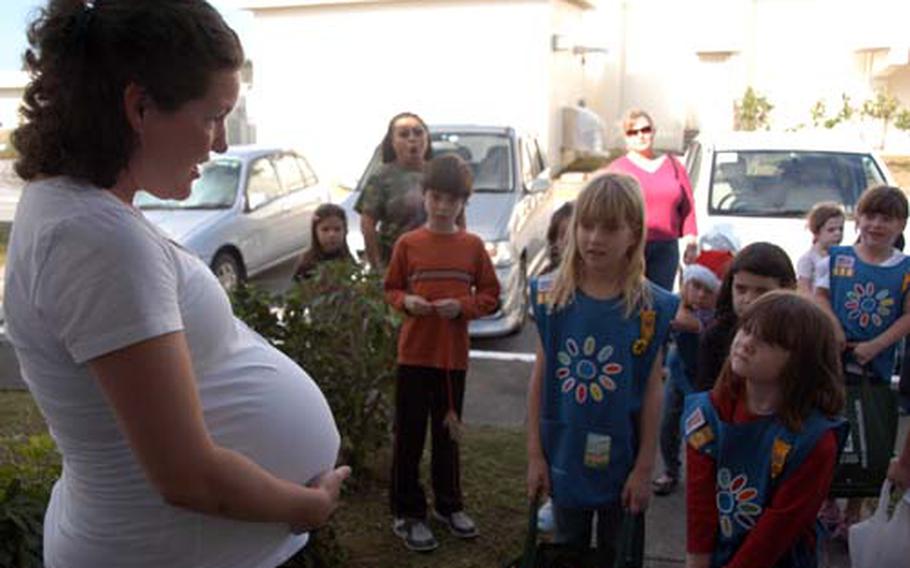 Amy Mancini, 34, right, shows off her tummy to curious Girl Scouts from Troop 436 who stopped by Dec. 10 to drop off meals at the Stork’s Nest on Camp Lester, Okinawa. She’s expecting twins. (Natasha Lee / S&S)

Amy Mancini, 34, right, shows off her tummy to curious Girl Scouts from Troop 436 who stopped by Dec. 10 to drop off meals at the Stork’s Nest on Camp Lester, Okinawa. She’s expecting twins. (Natasha Lee / S&S) 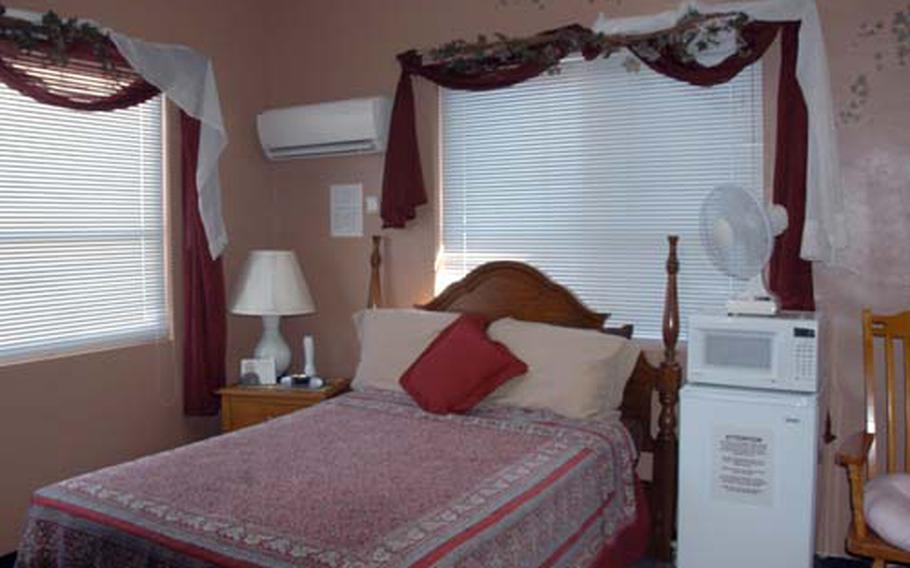 A bedroom inside one of the Stork’s Nest five cottages at Camp Lester in Okinawa. The facility provides free lodging and meals for expectant moms with high-risk pregnancies and families with infants in intensive care. The rooms in each cottage are adopted by service branches whose volunteers keep them spruced up and decorated. (Natasha Lee / S&S)

CAMP LESTER, Okinawa &#8212; As a nurse and an expectant mother of twins, Amy Mancini knows the risk associated with delivering multiples.

Being close to a neonatal intensive care unit is critical for cases like Mancini&#8217;s and other types of high-risk pregnancies.

So in November, she and her husband, Josh Mancini, a Navy general surgeon, were temporarily relocated from their duty station at Yokosuka Naval Base in mainland Japan to Camp Lester, home of the only military neonatal intensive care unit in the western Pacific.

Instead of having to foot hotel bills or find available lodging at nearby bases, the Mancinis were moved into a cottage at the Stork&#8217;s Nest &#8212; free temporary housing for women with high-risk pregnancies or families with a baby in the NICU.

And the accommodations are just one of the perks.

Volunteers from local base organizations provide frozen foods and weekly home-cooked meals for residents, and service units adopt cottages to maintain and renovate as needed.

But with donations expected to decrease next year, the board is seeking funding to continue to provide amenities such as calling cards, transportation and food vouchers, board members said.

"It is anticipated that this will drastically affect our fiscal viability," West said in an e-mail to Stars and Stripes.

Each cottage has four rooms and two bathrooms; residents share the kitchen and living-room areas.

The majority of residents come from mainland Japan and South Korea, but occasionally families on Okinawa with an infant in intensive care will use the facilities to cut back on frequent trips between their homes and the hospital.

Often residents are young, financially strapped and have active-duty husbands who may be unable to accompany them to Okinawa, so they are left feeling isolated, said Stork&#8217;s Nest board member Annette Schaefer.

A stay can average anywhere from a month to six months &#8212; making rental cars and taxi rides to the commissaries and exchanges at neighboring Camp Foster and Kadena Air Base costly, she said.

"We&#8217;re trying to do everything we can to make it easier for them," Schaefer said.

Donations are used to buy various items from exchange gift cards, diapers and wipes to such larger items as bedding, mattresses and a cleaning contract for the cottages.

"The nicer the surroundings are, the nicer it is for them to transition," West said.

For details on donating cottage items to the Stork&#8217;s Nest, e-mailstorksnest@hotmail.com.

Financial donations can be sent to: