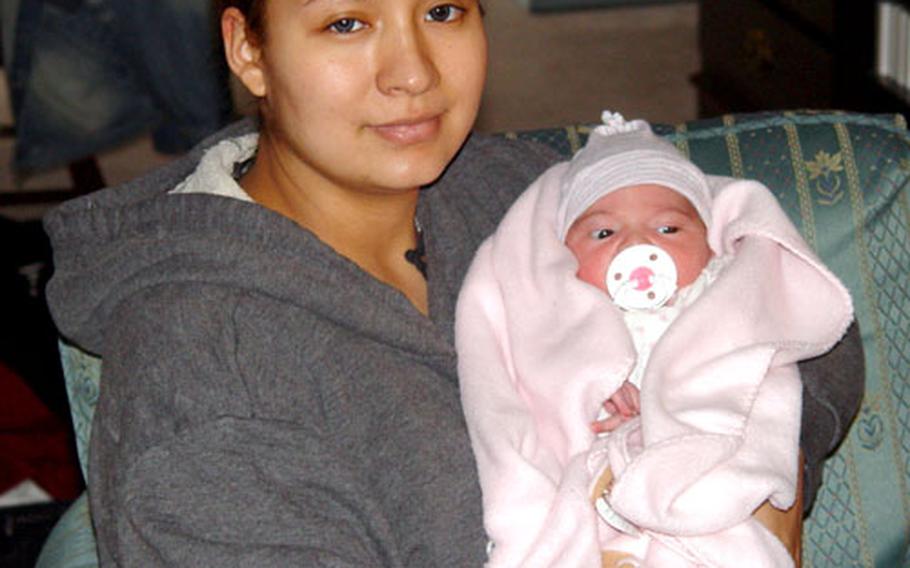 PYONGTAEK, South Korea &#8212; When she got home to Chinhae Naval Base in South Korea with her newborn daughter Wednesday night, Petty Officer 2nd Class Amy Broadus saw the figure of a big white stork waiting by the front steps.

Made of wood, the stork stood almost five feet tall, had yellow legs and beak and sported a red and blue conductor&#8217;s cap. Hanging from its mouth was a wooden &#8220;bundle&#8221; colored pink, with the following in blue letters:

Setting a stork out front has become a regular practice at Chinhae Naval Base.

It&#8217;s the idea of Vicky Rands, who was appointed Chinhae Navy Ombudsman this summer.

As base ombudsman, Rands is the liaison between the families and the command. It&#8217;s a voluntary position. Chinhae is the third command at which she&#8217;s held the post.

But Americans serving in South Korea don&#8217;t really have that option, said Rands. Besides, she said, pregnant Chinhae wives are checked in to the 121 General Hospital 30 days &#8220;prior to the due date of the baby.&#8221;

And, Rands added, at Chinhae, base wives also volunteer to cook the birth family dinner and dessert for the first night back and provide a second meal that can be refrigerated and used the next night or later.

Broadus and her husband, Petty Officer 2nd Class Casper Broadus, were the fourth Chinhae couple to have the stork since the practice began in November, Rands said.