Stopping insurgents before they hit Baghdad 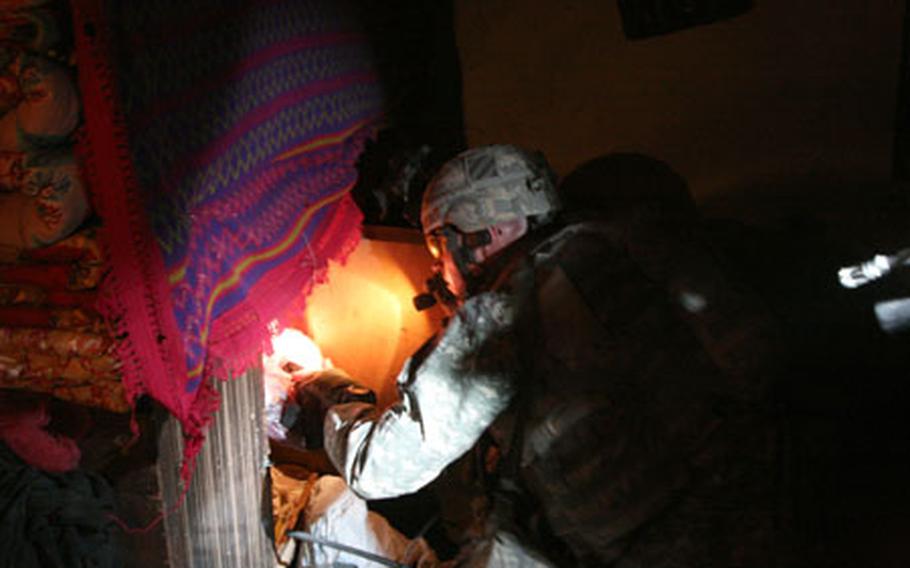 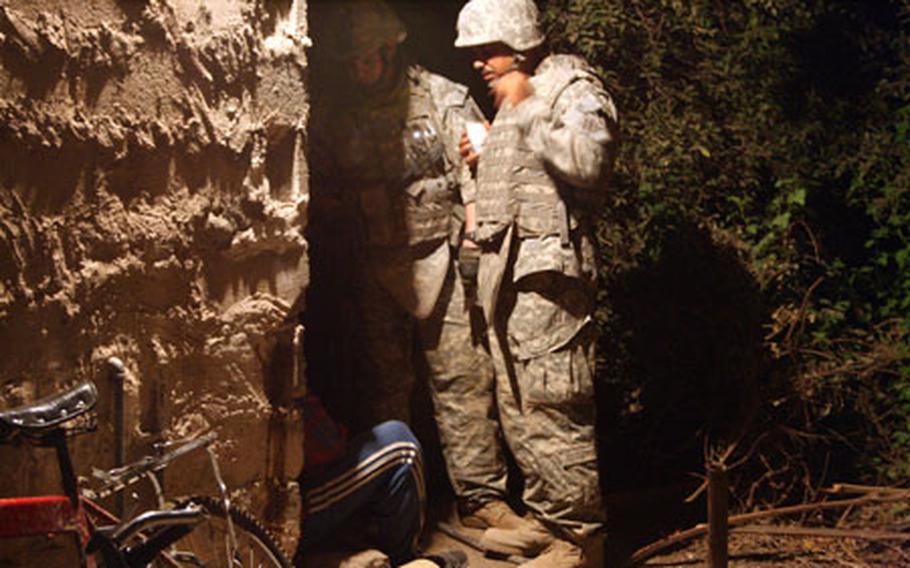 A U.S. soldier, left, and an Iraqi interpreter question a man suspected of helping insurgents direct mortar fire at Forward Operating Base Murray in Iraq’s Arab Jabour district on the southeast of Baghdad. (Drew Brown / S&S)

FORWARD OPERATING BASE MURRAY, Iraq &#8212; A group of about 20 soldiers moves quietly under a starry sky toward a house about 500 meters from this small outpost less than 10 miles southeast of Baghdad.

As they file up the road, an imam begins a solemn song over a loudspeaker somewhere nearby, calling the faithful to the evening&#8217;s final prayers.

The soldiers arrive at their destination in less than 10 minutes. Once inside, they separate three men from the women and children. They move throughout the house, looking for weapons and contraband.

The youngest of the men appears to be in his mid-20s. He runs a fruit stand just up the road from Murray and has been under suspicion for some time. He&#8217;s pulled outside for a short interrogation. His hands are bound with plastic cuffs, and he is put under guard. The two older men are photographed and their fingerprints scanned. The information will be logged later into a nationwide database that U.S. forces in Iraq are compiling of known and suspected insurgents.

A soldier brings out two small white flags that he found atop the roof. Capt. Eric Melloh, 30, of Huntsville, Texas, is certain they&#8217;ve got their man.

Their suspicions about the fruit seller appear to have been right. Although two mortar rounds were fired at Murray the next day, both fell short by about 150 meters. In previous attacks, mortars had landed inside the compound, wounding at least one soldier.

The two-hour raid last week is just a small part of a massive sweep operation that U.S. forces with Task Force Marne, composed largely of the Army&#8217;s 3rd Infantry Division, launched June 15 in an effort to stop the flow of insurgents, weapons and bomb-making materials into the Iraqi capital.

&#8220;Our primary task is to block the accelerance of violence into Baghdad,&#8221; said Maj. Gen. Rick Lynch, commander of 3rd Infantry Division and Task Force Marne.

The massive sweep was launched just two days before a similar operation in Iraq&#8217;s Diyala province, northeast of the capital. Called Marne Torch, the operation is focused on a district called Arab Jabour, which begins just south of Baghdad and runs southeast along the Tigris River.

The region, which stretches 12 miles from the Tigris River in the east to the town of Mahmudiyah in the west and 35 miles south from Baghdad, has seen no sustained U.S. presence for much of the last two years. Iraqi army and police forces in the region have been nonexistent, said Col. James Adams, deputy commander of the 3rd ID&#8217;s 2nd Brigade.

The region, which is also part of Iraq&#8217;s notorious Triangle of Death, has become a virtual safe haven for al-Qaida and other insurgent groups. Heavily forested with date palm groves and other vegetation along the Tigris and dotted throughout with small farms and miles of cropland, the region has offered a perfect sanctuary from which to launch attacks into Baghdad.

Lynch said U.S. forces believe there are an estimated 700 insurgents active in the region. The extent of support they have from the local population is unclear. The region is about 99 percent Sunni Muslim, with a single dominant tribe, the al Jabouri.

Adams said that U.S. forces are moving slowly through the region, searching every dwelling, pushing the insurgents farther south as they go.

So far, there has been very little direct enemy contact. But U.S. troops have encountered numerous roadside bombs, booby traps, homemade explosives and a number of small weapons caches.

Initial estimates projected that U.S. forces would suffer one soldier killed and an additional 10 wounded every day for the duration of the sweep, but so far U.S. casualties have been much lower. U.S. troops have suffered six soldiers killed and a little more than 30 wounded since Marne Torch began.

Lt. Col. Ken Adgie, commander of 1-30th Infantry, said his guidance is to clear every residence in his area of operations and to compile information on every single person they encounter.

Adgie said that U.S. forces also want to send a message that they are in Arab Jabour to stay. He said residents were reluctant to cooperate with his troops at first, but are now beginning to provide information on insurgents&#8217; activities.

He said once U.S. forces convince the locals that they are in the region to stay, the next step will be to try to win their trust and confidence.