Stop-loss troops could get $1,500 extra each month 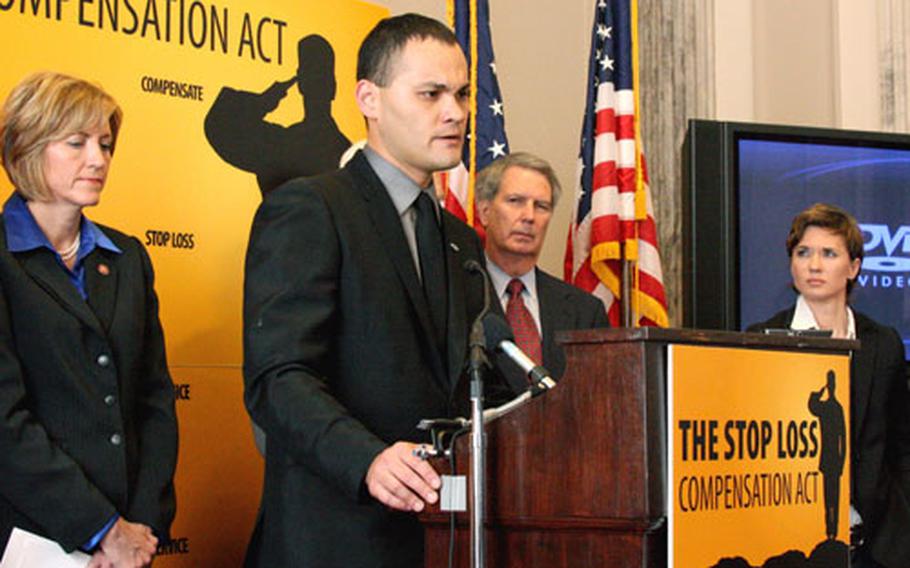 Separated Army E-4 Colby Buzzell, who left the service three years ago but was recently recalled to duty under the military’s stop-loss policy, speaks to reporters at a Captiol Hill press conference Thursday about new legislation to increase pay for troops serving beyond their scheduled retirement date. With him are Rep. Betty Sutton, D-Ohio (left); Rep. Walter Jones, R-N.C.; and Kimberley Peirce, writer and director of the film “Stop Loss.” (Leo Shane III / S&S)

WASHINGTON &#8212; Troops kept in the ranks through the military&#8217;s stop-loss policy could see an extra $1,500 each month under legislation introduced Thursday.

Lawmakers supporting the measure said the move is an attempt to compensate those troops for the disruption additional service can cause, and represents a step forward in their efforts to end the stop-loss policy.

"It really is a backdoor draft," said Sen. Frank Lautenberg, D-N.J., who sponsored the bill. "But this (proposal) isn&#8217;t questioning the necessity of the policy. We&#8217;re saying there ought to be some recognition of the sacrifice they&#8217;re making."

The $1,500 monthly bonus would be retroactive to October 2001, allowing troops who have already fully separated from the service to receive a payout as well as those still on active duty.

Lautenberg could not estimate the total cost of the measure, but said it "doesn&#8217;t compare to the cost of what they&#8217;ve faced."

Pentagon officials said more than 120,000 troops have been kept on active duty past their separation date since 2002 under the policy. That includes about 12,000 on active duty at the end of May, nearly 4,000 of whom are National Guard members.

The policy can keep servicemembers in the ranks after their enlistment is complete if they are to deploy within 90 days of their separation date. Congressional researchers said that on average, stop-lossed troops serve an extra six months, receiving the standard military pay.

Colby Buzzell, a separated soldier who served in Iraq with the 3rd Brigade, 2nd Infantry Division&#8217;s Stryker Brigade, said he was approaching his separation date before deployment and was told upon arrival in country that he and many others in the unit would be stop-lossed to finish their tour.

Buzzell, a well-known blogger during his tour of Iraq in 2003, left the service three years ago. He said several friends from the platoon who re-enlisted were killed two years ago while stop-lossed in Iraq to finish another tour.

Buzzell was recently recalled to serve overseas again, this time through his ready reserve commitment.

In recent months, military leaders including Secretary of Defense Robert Gates have expressed a dislike for using stop-lossed troops to cover personnel gaps, but also acknowledged that they&#8217;ll likely need to continue the practice in coming years.

House sponsor Rep. Betty Sutton, D-Ohio, said the financial burden of putting off a job or college can be devastating for those troops."This is difficult, unjust and undermines the voluntary nature of our military," she said. "We must honor their continuing service and sacrifice, and those of their families."

Lawmakers said they will push for hearings in coming months on the bill and the larger stop-loss issue.