Stone a monument to 3rd ID's perseverance in Iraq 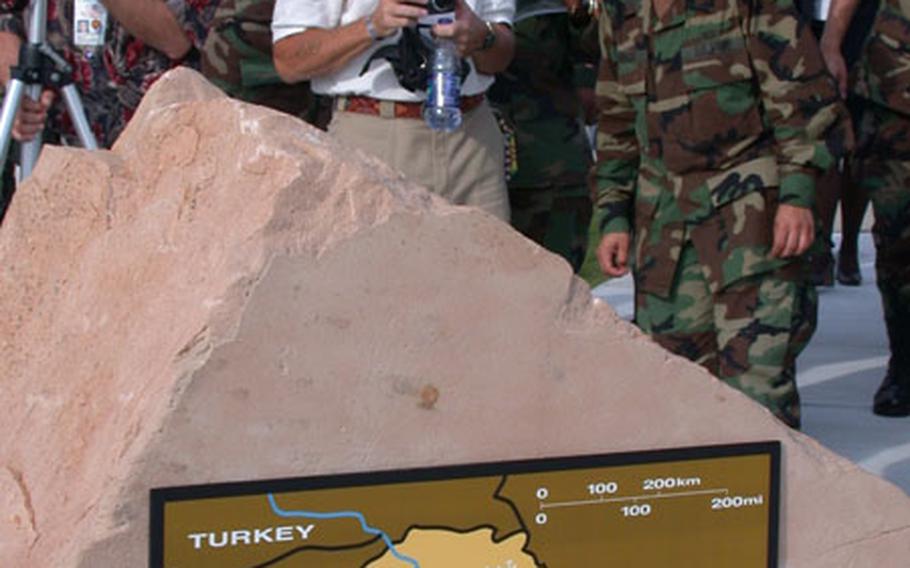 So Thursday leaders of the Army&#8217;s 3rd Infantry Division and the quaint Southern town of Hinesville, Ga., did just that.

To honor of the Army&#8217;s &#8220;bulldogs,&#8221; another stone has been placed in the base parade field, reminding all of the sacrifices of war, said Maj. Gen. Buford C. Blount III, the outgoing division commanding general.

Hinesville Mayor Tom Ratcliff recounted the biblical story of Joshua traversing the Jordan River with the ark of the covenant, and how the sea parted to allow his army to cross on dry land. Joshua picked 12 men from 12 tribes to pick stones from the bed of the river, markers of their triumphant crossing.

The Marne Garden at Fort Stewart is peppered with boulders honoring the &#8220;Marne Division&#8217;s&#8221; soldiers, beginning with World War I. Thursday, they added the Iraq war. In five wars and many more battles, the Marne Division has lost 35,000 warriors, Blount said.

The Division earned its famed title &#8220;Rock of the Marne&#8221; during WWI, when soldiers stood their ground, like a rock, to defend the Marne River in France against the Germans.

&#8220;The rock itself is a monument to memorialize the service the 3rd Infantry Division gave to our country, both for the lives lost and those who served our country and the world by ridding us of that tyrant and dictator,&#8221; said Hinesville City Manager Billy Edwards.

Savannah, Ga.-based DuPre Monument Co. got the 3,286-pound, $2,225 desert sandstone boulder from Arizona, paid for with donations the Hinesville Military Affairs Committee raised by sending letters to chamber of commerce members throughout Georgia. They raised some $45,000 thus far to pay for various homecoming needs for the 3rd ID, including a much-anticipated picnic bash set for Oct. 4.

Hinesville residents celebrate when the soldiers celebrate, and mourn when they mourn, several said.

Hinesville sure knows how to say &#8220;thank you,&#8221; said Sgt. 1st Class Brian Rauschuber, a reservist who has been activated for more than three years of his four-year Army career.

Two of those years have been with the 3rd ID, in his opinion, the Army&#8217;s greatest.