Alconbury Elementary School students Anthony Walker and Thomas Tarach hold their hands up in hopes of being picked to help with a musical demonstration with a basketball. (Jason Chudy / S&S) 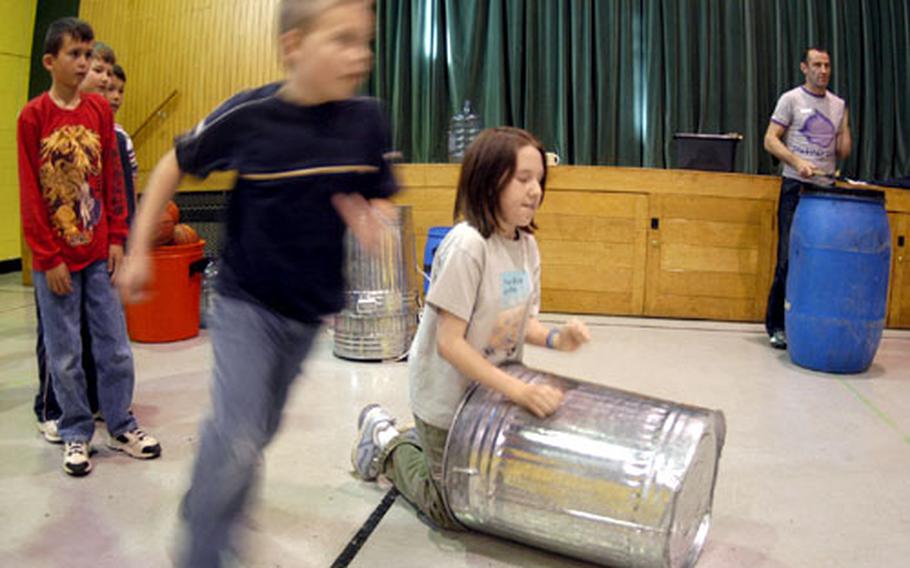 Serenity McKenzie bangs on a garbage can as David Dougherty runs around her at the Alconbury Elementary School gym. (Jason Chudy / S&S) Alconbury Elementary School&#39;s Mattea Swegles beats on the back of a trash can, trying to keep beat with Stomp performer,Paul Gunter, at back. (Jason Chudy / S&S)

Garbage cans and basketballs may at first seem like strange tools to teach kids about music, tempo and rhythm, but teachers from the London musical &#8220;Stomp&#8221; put that lesson in a little better perspective.

&#8220;Stomp&#8221; performs with what only could be considered nontraditional instruments &#8212; familiar household items such as trash cans and garden hoses.

Two troupe members were at RAF Alconbury last week as part of the elementary school&#8217;s Artist in Residence program.

The program brings specialists from a variety of art and science fields to the school at various times during the year to give students an out-of-classroom &#8212; and in the case of &#8220;Stomp,&#8221; an out-of-this-world &#8212; learning experience.

In addressing the students, Dave Gallagher and Paul Gunter said they were from a &#8220;strange planet&#8221; where rhythm was key to everything, from the way inhabitants walk to how they pronounce their names.

As the children learned how to &#8220;fit in&#8221; on the &#8220;Stomp&#8221; performers&#8217; planet, teacher Sandy Adams explained that the Artist in Residence program works to enhance regular classroom instruction for the school&#8217;s kindergartners through sixth-graders.

&#8220;[The program provides] enlightenment and exposure to different cultures, different genres of the arts,&#8221; she said.

The program has been running for more than five years and events are set up by school faculty, including Adams. The program is supported by the base Parent-Teacher Association and enlisted spouses club.

Since the program&#8217;s start, children have been educated &#8212; and entertained &#8212; by a variety of artists and scientists, including a forensic scientist, dancers, reptile and raptor handlers, and even an astronomer who has worked for the British Broadcasting Corp. and ITV news organizations.

While the children clapped, banged &#8212; and stomped &#8212; at the session, teachers and even some parents watched from the back of the school&#8217;s gymnasium.

The Artist in Residence program got a positive review from parent Theresa McKenzie, whose fifth-grade daughter, Serenity, sat up front with her classmates.

McKenzie said her point was best illustrated by a visit from a Cambridge University astronomer.

And if two days of &#8220;Stomp&#8221; wasn&#8217;t enough excitement for an entire school year, Adams said they already have next month&#8217;s Artist in Residence planned: Morris Dancers, who perform a traditional European dance that traces its history to the 16th century.