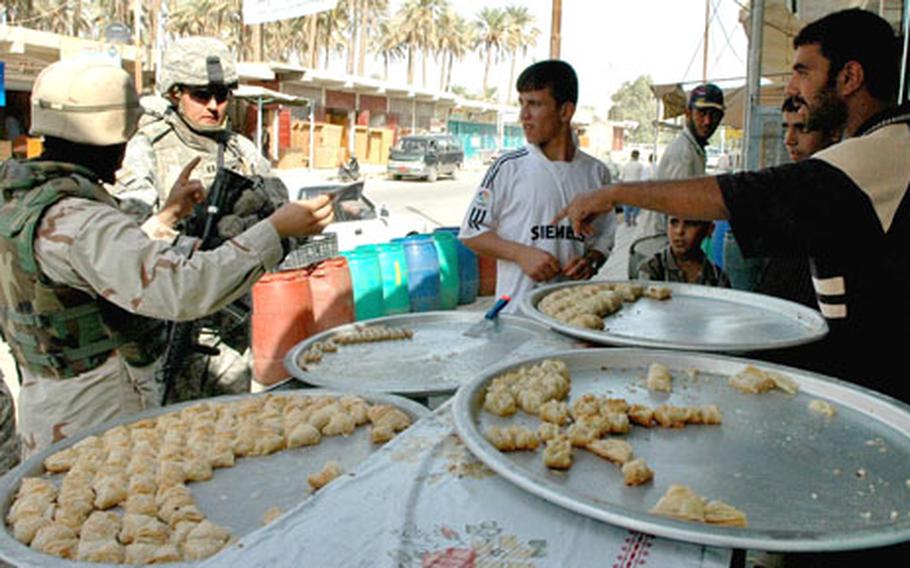 Many residents of Tarmiyah, Iraq, say they would be happy to see Saddam Hussein return to power. However, they were willing to do business with Capt. Casey Connors, who bought sweets during a recent visit. (Anita Powell / S&S)

TARMIYAH, Iraq &#8212; The Saddam Hussein Fan Club is alive and well &#8212; at least it seems to be in this dusty Sunni town north of Baghdad.

Despite the former dictator&#8217;s capture nearly three years ago, many of the town&#8217;s residents &#8212; who now find themselves marked for death by the increasingly bold Shiite militias &#8212; look fondly upon the mustachioed despot and the good life he created for his fellow Sunnis.

Their feelings show in their cold stares at American soldiers and the bombs that tear through the roads daily as soldiers from the Fort Hood, Texas-based 1st Battalion, 66th Armor Regiment drive through on patrol.

Company E 1st Sgt. Cecil Davis said it&#8217;s not uncommon to hear residents speak against Americans and in favor of their former leader.

American soldiers say they will continue to do their job, which includes bringing new infrastructure projects to the area, supporting the local government and working with Iraqi forces. But changing perceptions is proving trickier.

But there is one point over which Americans and Iraqis agree: Over the last year, sectarian violence has intensified as local Shiites have become more empowered by Shiite militia leaders.

Local sheik Sa&#8217;eed Jasim Hamid said two of his sons were murdered for being Sunni.

Although locals universally lambasted the Shiite militia, many denied having seen any trace of Sunni militia members, although American officials said Sunni militias are active in the area and are often responsible for strikes against American forces.

Given the security situation, many locals turn nostalgically to what they see as the good old days.

Oddly, among Saddam&#8217;s strongest proponents are young men whose recollection of the Iran-Iraq war, the first Gulf War and Saddam&#8217;s alleged genocidal fits would be nothing but a fleeting childhood memory.

Davis said the younger set&#8217;s nostalgia was born out of ignorance.

But adults, too, pine for their old leader.

Even the sheik, who has long participated with American forces, agreed. &#8220;They say Saddam Hussein killed 160 people in the Dujail area,&#8221; he said, referring to an 1982 incident north of Baghdad for which Saddam was tried by the Iraqi High Tribunal and faces sentencing in October. &#8220;Right now every day 200 people are getting killed in Baghdad. Those are just the dead bodies we&#8217;ve found.&#8221;

And what of the Americans?