Still time to mail from Pacific, but clock is ticking 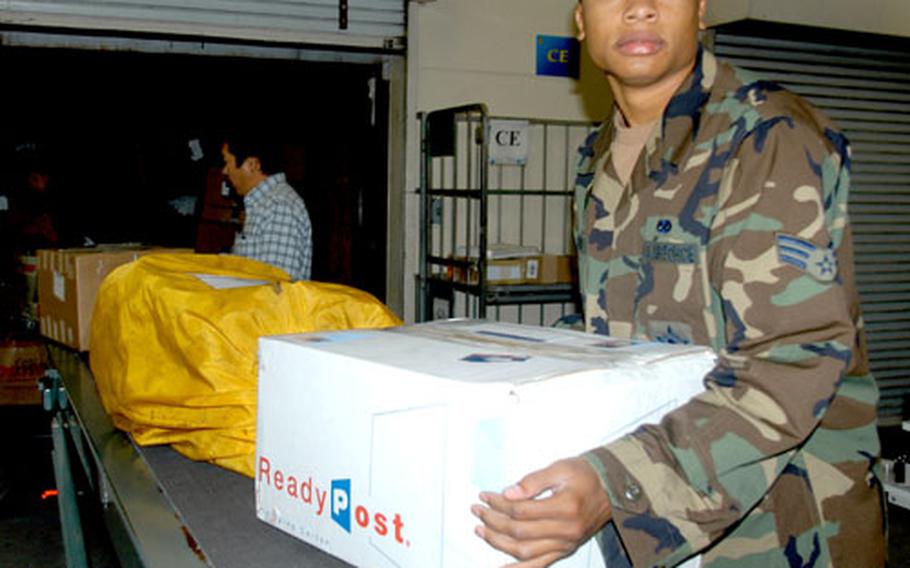 The guaranteed deadline for Express Mail packages to the States is Friday for all Pacific locations, said Master Sgt. Alfred Wilhite, Misawa Air Base postmaster. For Priority Mail and first-class letters and cards, the deadline was Dec. 5.

&#8220;That&#8217;s a guess-estimate,&#8221; Wilhite said, noting delivery speeds depends on several factors, including destination and mail volume going to the United States. Mail from Japan destined for the States is flown out of Tokyo&#8217;s Narita International Airport to gateway cities Dallas, New York, San Francisco and Chicago. Mail earmarked for those locations should get there pretty quickly, Wilhite said.

Misawa&#8217;s post office is open an extra 24 hours per week during the holiday mail rush, but some of those additional hours end next week. The post office annex for mailing packages at the base exchange is open Thursday, Friday and Saturday 10 a.m. to 4 p.m. The last day is Saturday. Only credit and debit cards are accepted.

The finance window in the post office for mailing packages and buying stamps won&#8217;t be open Mondays starting next week. That service was available only on Mondays during the holiday season&#8217;s busiest mailing weeks.

The post office is augmenting its permanent active-duty and civilian staff during the holiday with 16 &#8220;over hires&#8221; and two National Guard members. But volunteers are needed from Sunday to Friday from 4 to 9 p.m., Wilhite said. To volunteer, call Tech. Sgt. Frederick Jackson at DSN 226-9326. Volunteers must be at least 15 years old.