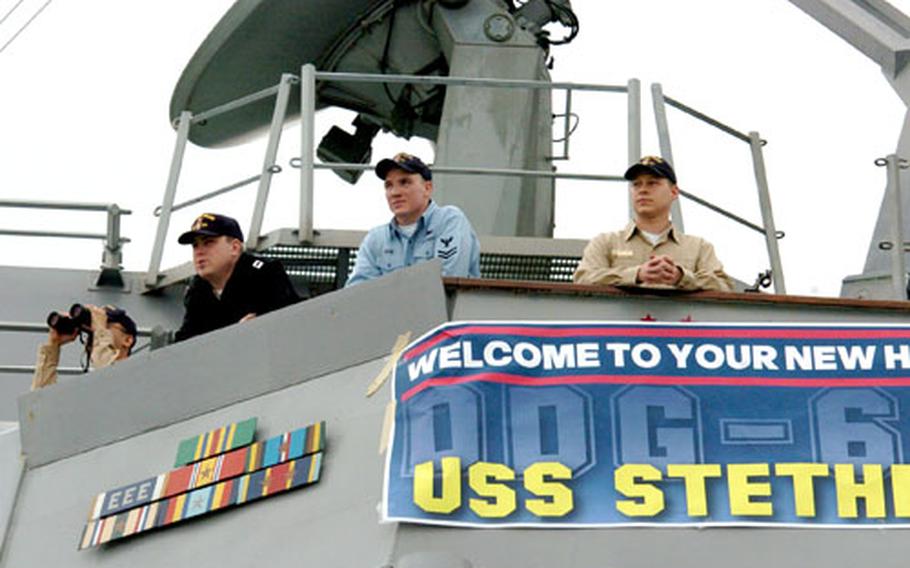 Officers and sailors of the USS Curtis Wilbur watch from the bridge wing as the USS Stethem arrives at Yokosuka Naval Base, Japan, on Friday. (Jim Schulz / S&S)

Officers and sailors of the USS Curtis Wilbur watch from the bridge wing as the USS Stethem arrives at Yokosuka Naval Base, Japan, on Friday. (Jim Schulz / S&S) 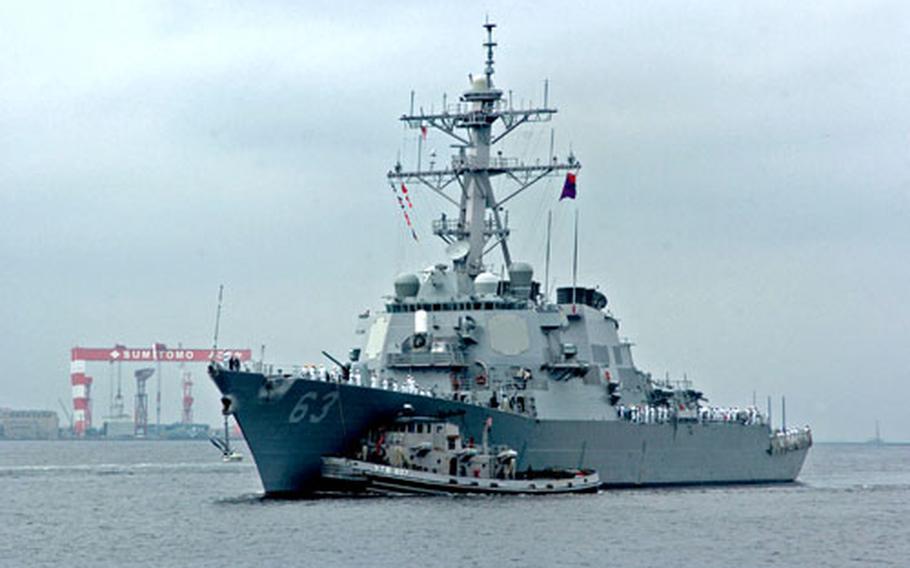 The USS Stethem pulls into Yokosuka Naval Base, its new home port. (Christopher B. Stoltz / S&S) 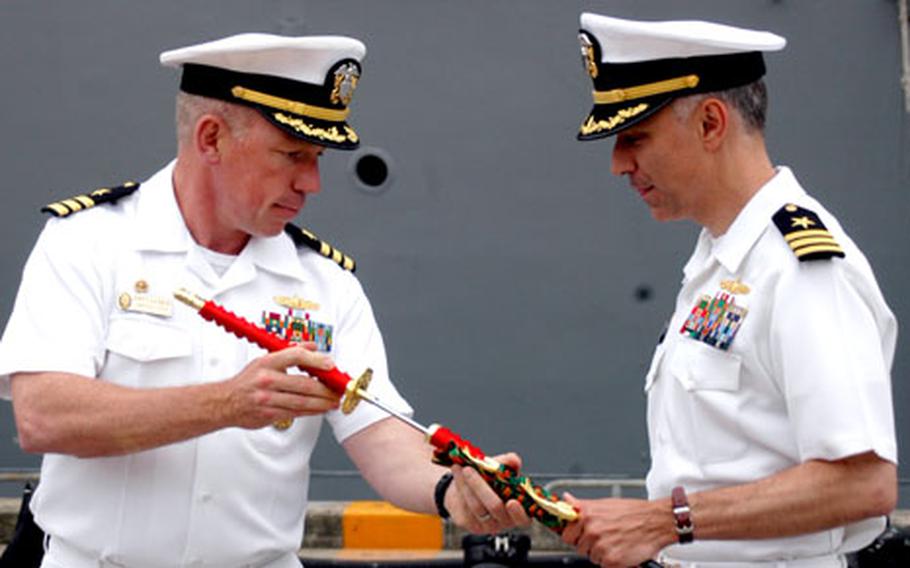 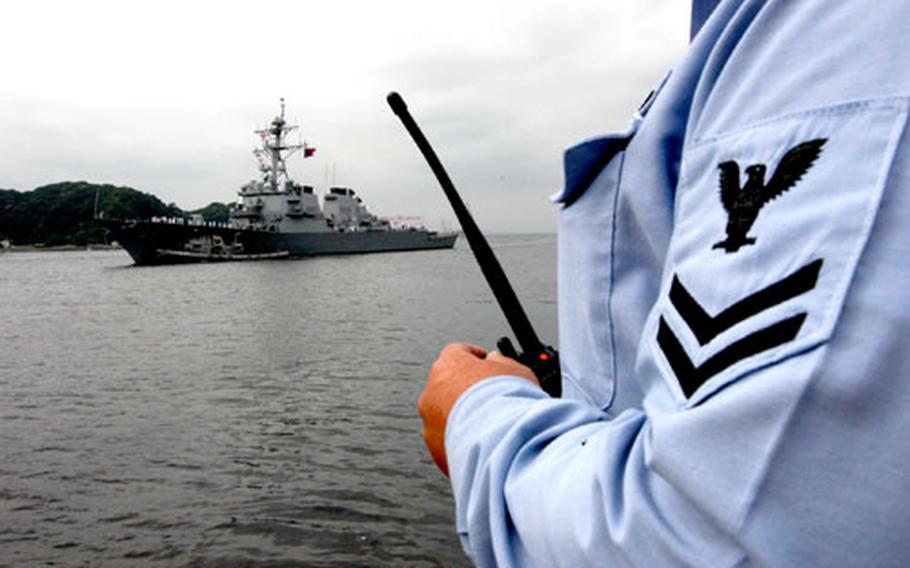 Sailors aboard the USS Stethem wear a ball cap like this one with the insignia of a Seabee Battalion in honor of Petty Officer Robert Dean Stethem, a Navy diver for whom the ship was named. (Christopher B. Stoltz / S&S)

The latest arrival to Yokosuka Naval Base, Japan, will be easy to spot.

On the ball caps of each &#8220;Steelworker&#8221; from the guided missile destroyer USS Stethem, a Navy Seabee symbol reminds all who the ship is named for.

Petty Officer 2nd Class Robert Stethem, a steelworker and diver, was killed 20 years ago this month during the hijacking of a commercial airline in Lebanon.

He was returning from a construction battalion deployment to Athens when hijackers commandeered the plane and redirected it to Beirut.

Stethem, 23, was killed after hijackers saw his military ID card.

In 1995, the Navy commissioned the destroyer in his honor.

After 10 years in San Diego, the ship and its crew &#8212; called Steelworkers for Stethem&#8217;s military occupation &#8212; relocated Friday to Yokosuka to join Destroyer Squadron 15, part of the Kitty Hawk Strike Group.

The Stethem replaces the USS Cushing, which moved to San Diego to prepare for its July 1 decommissioning, according to Navy officials.

The ship, the Navy&#8217;s first Tactical Tomahawk Aegis destroyer, according to its Web site, brings with it more modern technology as part of the Navy&#8217;s push to bring the best ships to the Pacific Rim.

The Stethem is an Arleigh Burke class guided-missile destroyer whose mission is to operate independently as a multithreat offensive ship, to support the strike group and to perform strike warfare against inland targets.

According to Navy officials, the ship is part of a class considered the most versatile in the fleet, capable of air, surface and undersea warfare.

The ship now is carrying the first female enlisted sailors to wear the Steelworkers cap, after modifications were made late last year to accommodate them. Nine enlisted sailors, one chief petty officer and six officers comprise the female crew.

About 136 of the 327 personnel assigned to the ship crossed over from the Cushing. The rest are new arrivals to Yokosuka.

The Stethem is the first ship for Ensign Bristol Hartlage, who said Friday: &#8220;I have duty right now, but I&#8217;m so excited to go out in Japan.&#8221; First on her list, she said, is to figure out the train system and then use it to visit a friend here.

Petty Officer 1st Class Joseph Williams III has been stationed in Japan before, he said.

His advice to his fellow Stethem sailors who are in Japan for the first time?

The ship is expected to bring with it about 200 dependent families, slightly fewer than the number attached to the Cushing, Navy officials said.

Christopher B. Stoltz contributed to this report.

Destroyer&#8217;s namesake is slain steelworkerThe USS Stethem, the latest ship to be home-ported at Yokosuka Naval Base in Japan, was named for Petty Officer 2nd Class Robert Stethem, a steelworker and Navy diver killed 20 years ago on June 15, 1985, this month by hijackers in Lebanon.

Stethem was returning from a Seabee construction battalion deployment to Greece in June 1985 when hijackers took over the airplane he was on, TWA Flight 847.

The hijackers took the plane to Beirut and demanded that Israel release members of their organization.

They searched the passengers and determined Stethem was in the U.S. military.

According to reports, they singled him out, beat him, shot him in the head and threw his body onto the airport tarmac.

Stethem was posthumously awarded the Bronze Star and Purple Heart.

He is buried at Arlington National Cemetery.

One of the hijackers later was caught and convicted for the murder and sentenced to life in prison.

Another hijacker and two others believed to be involved in the planning were indicted and are on the FBI&#8217;s most-wanted list.

Diver&#8217;s helmets also adorn the ship in many places.