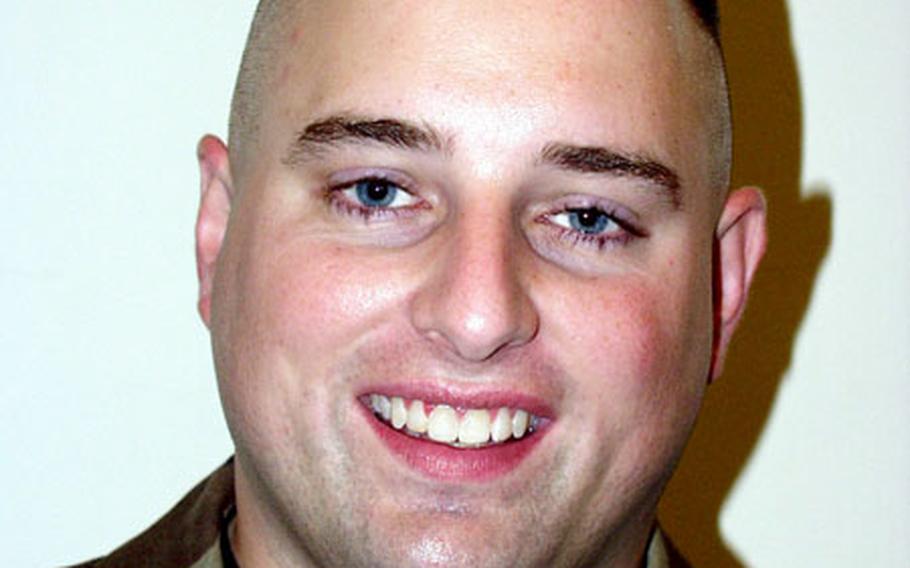 Tech. Sgt. Steven Doll was recently promoted to his new position at Aviano Air Base, Italy, through the Stripes for Exceptional Performers program. (Kent Harris / S&S)

A few hundred airmen around the globe get some good news each year &#8212; after they&#8217;ve received the bad news.

That number could include as many as 42 airmen assigned to missions in Europe who will be promoted by the end of this month through the Stripes for Exceptional Performers program. In many cases, the news comes a few months after they&#8217;ve learned that they didn&#8217;t reach the standards to get promoted in the normal fashion.

But he did not manage to achieve a score high enough to advance to technical sergeant in two attempts. His daily performance impressed supervisors in the 31st Security Forces Squadron enough to forward his name and package up the chain of command. Worden and a panel including wing Command Chief Master Sgt. Daniel Valdez Gill then decided whom to promote.

Tech. Sgt. Francisco Morales was one of the supervisors who nominated Doll.

He said Doll deserved the promotion &#8220;because of his maturity and his experience level. He&#8217;s always a top performer and always gives an above the board effort.&#8221;

Doll is one of seven airmen under the 16th Air Force umbrella designated to receive a promotion during the fiscal year. The 3rd Air Force, with a larger population of airmen, received 23 slots. U.S. Air Forces in Europe headquarters had three more positions allotted and airmen assigned to NATO and the U.S. European Command were eligible for a combined three more positions.

That leaves Gen. Robert H. Foglesong, the USAFE commander, with six slots to use wherever he sees fit.

Senior Master Sgt. Hector Baez, superintendent of promotions and evaluations for USAFE, said the command received a little less than 10 percent of the 422 slots available servicewide. That number was based on the 3,300 airmen in USAFE who were eligible for promotion to staff sergeant, technical sergeant or master sergeant.

&#8220;Basically, individuals really have to set themselves apart from their peers,&#8221; Baez said, summing up a number of criteria that commanders use to evaluate candidates for promotion. &#8220;The commander has to be convinced the candidate&#8217;s worthy.&#8221;

Commanders always have the option of not selecting anyone. In fact, Baez said there are still a few of the 42 spots available to the commands in Europe that haven&#8217;t been filled yet.

There are a variety of reasons those chosen for promotion through the program &#8212; which was adopted in 1980 &#8212; fail to get promoted in the normal fashion, Baez said.

In the Air Force, candidates trying to get promoted to staff sergeant, technical sergeant or master sergeant have to meet a somewhat complicated formula to advance.

They have to take two 100-question tests, one focusing on general knowledge of the Air Force and the other on career specialty. Time of service, time at the rank, decorations and annual performance reports also factor in.

He&#8217;s not unhappy he won&#8217;t be taking the test again. But he plans to take a few more tests over the next several years.

Total number of openings available to Air Force commands in Europe during fiscal year 2003 under Stripes for Exceptional Performers.