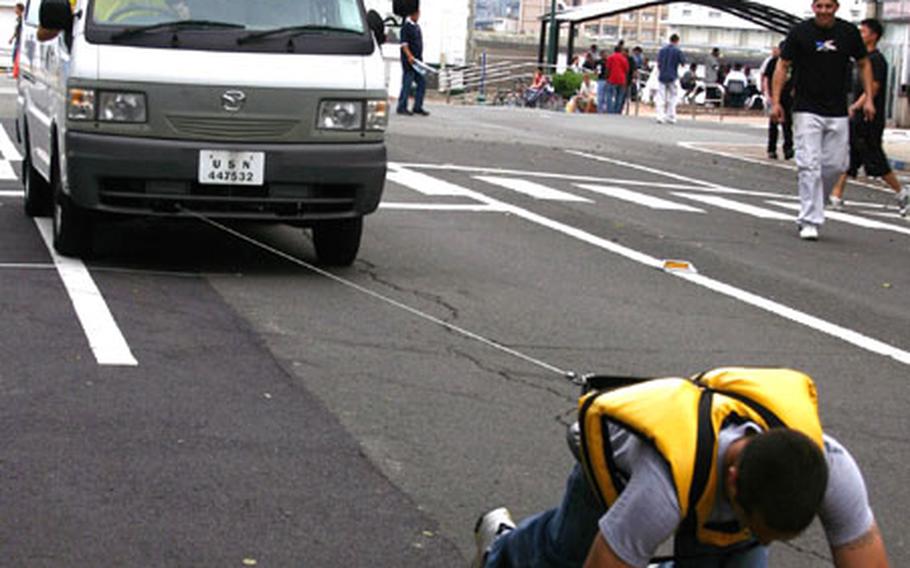 The Strongman Contest featured contestants pulling a security vehicle Sunday, including Fireman Joshua Soderberg from the USS Stennis. He said it was such fun he’s like to do it again. (Greg Tyler / S&S)

The Strongman Contest featured contestants pulling a security vehicle Sunday, including Fireman Joshua Soderberg from the USS Stennis. He said it was such fun he’s like to do it again. (Greg Tyler / S&S) The Power Pitching Contest at Sasebo Naval Base measured the speed of pitches thrown by contestants including Petty Officer 3rd Class Shane Waddell of the USS Stennis. Waddell’s pitch was clocked at 66 miles per hour. (Greg Tyler / S&S) There was a lot of waiting for those needing cash from Sasebo Naval Base&#39;s ATM machines Monday afternoon. (Greg Tyler / S&S)

SASEBO NAVAL BASE, Japan &#8212; The visiting sailors here from the USS Stennis Carrier Strike Group are taking advantage of the leisure-time activities organized by base officials.

The USS Stennis, a nuclear-powered aircraft carrier with a crew of about 6,200; the USS Howard, with about 380 crew members; and the USNS Rainier, with 176 civilian and 59 military crew members, arrived Saturday for a port call. Officials won&#8217;t confirm when the Stennis is leaving port, but special activities are planned through Tuesday night.

Morale, Welfare and Recreation, Navy Exchange and other personnel in Sasebo spent much of the past few weeks planning for the influx of sailors.

Petty Officer 3rd Class Gustavo Ortiz, from the Stennis, strolled out of the NEX main store carrying two boxes and a big shopping bag full of souvenirs Monday. The boxes each contained a samurai sword.

Many visiting sailors are interested in the tours, said Mike Rodriguez, MWR&#8217;s Travel and Tours Office director. He spent much of Monday distributing flyers and answering questions about all that&#8217;s available in and around Sasebo.

Rodriguez said some of the most popular tour destinations are Nagasaki, Beppu and its famous natural hot springs, Kumamoto and Sasebo city.

The outdoor activities were to continue through Tuesday night. Softball and basketball tournaments started during the weekend along with skill challenges in strength, golf, even pitching a baseball.

Stennis Fireman Joshua Soderberg was harnessed to a security department vehicle as he strained to pull it down the street during a Strongman Challenge.

As for the port call, his mind remained on golf.

The Stennis is deployed in the western Pacific Ocean after taking part in a series of exercises in Alaska and Hawaii. The Stennis and USS Kitty Hawk carrier strike groups completed the Joint Air and Sea Exercise 2004 on Aug. 15. Both carriers also have taken part in the Summer Pulse &#8217;04 exercise.