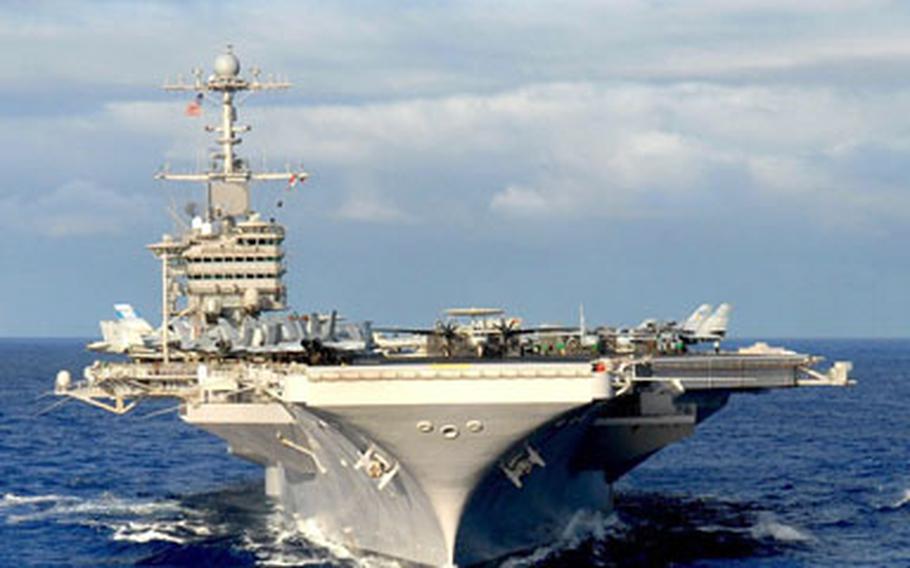 USS John C. Stennis steams in the Pacific Ocean during a photo exercise showcasing the entire John C. Stennis Carrier Strike Group off the coast of Guam. JCSSG entered the 5th Fleet area of operations Feb. 19 on a regularly scheduled deployment in support of Maritime Security Operations (MSO). (Courtesy of the U.S. Navy)

The aircraft carrier USS John C. Stennis and its strike group entered the U.S. 5th Fleet area of operations Monday, boosting the American carrier presence in the Persian Gulf region to two battle groups, according to a Navy news release.

The Stennis&#8217; sailors and air wing are in the regional waters to provide maritime security operations and support ground forces in Afghanistan and Iraq.

Carrier Strike Group 3, led by Rear Adm. Kevin Quinn, is made up of the Stennis, Carrier Air Wing 9, Destroyer Squadron 21, the guided-missile cruiser USS Antietam, guided-missile destroyers USS O&#8217;Kane and USS Preble, and the fast combat-support ship USNS Bridge, the release stated. More than 6,500 sailors and Marines are assigned to the group.

The Stennis joins the USS Eisenhower and its group, which has been in the Gulf region since Oct. 30. In January, the Ike took a detour from its mission in the Middle East to sail off the coast of Somalia and begin surveillance missions over the Horn of Africa nation.

The nuclear-powered Stennis left its homeport of Bremerton, Wash., on Jan. 16. News reports have portrayed the Stennis&#8217; deployment as a U.S. military warning to Iran &#8212; accounts the U.S. government and military have denied.

&#8220;The USS John C. Stennis Carrier Strike Group is here to help foster stability and security in the region,&#8221; Quinn said in a statement. &#8220;We look forward to working with our coalition partners to provide support for ground forces operating in Iraq and Afghanistan, as well as conducting maritime security operations that help provide a safe environment for shipping within the region.&#8221;

The region under 5th Fleet domain includes 2.5 million square miles of water and includes the Persian Gulf, Arabian Sea, Red Sea, Gulf of Aden, Gulf of Oman and parts of the Indian Ocean.