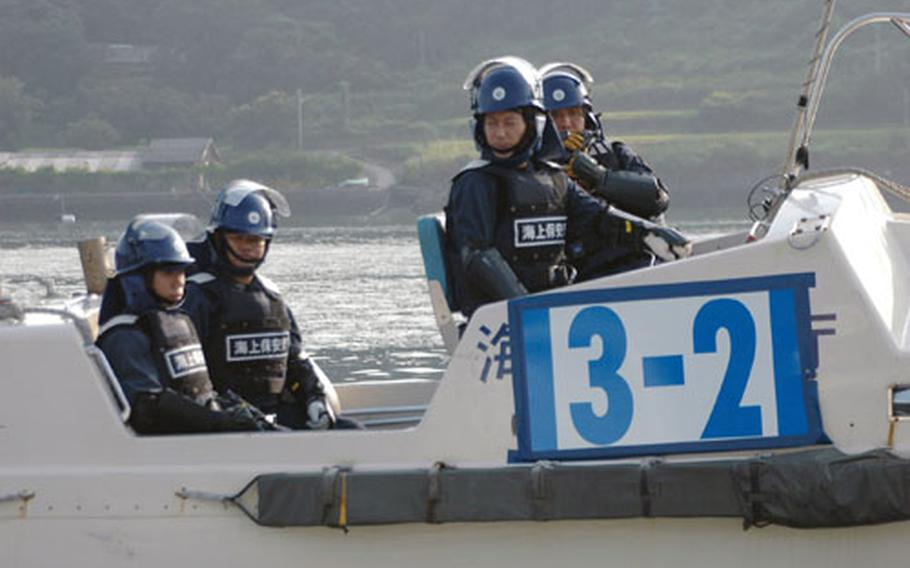 Japanese riot police were present in small boats just in case things got out of hand as about 150 Japanese protesters rode in about 20 fishing boats and shouted in megaphones to express their disapproval of the USS John C. Stennis&#39; port call at Sasebo Naval Base on Saturday. The protest was loud, but peaceful. (Greg Tyler / S&S)

As the massive carrier and crew of about 6,200 eased into Sasebo Harbor, the protesters&#8217; boats cut through the water along both sides of the ship while they shouted phrases such as &#8220;Get away carrier!&#8221; into megaphones.

The Japan Coast Guard and a unit of riot police in a small motorboat were in position between the Stennis and the protesters, each fishing boat plastered with bright red flags and banners, some with English slogans including, &#8220;We protest CVN-74 carrier in! [sic]&#8221;

Military helicopters buzzed overhead the entire time keeping an eye on the protesters&#8217; movements below.

Despite all the activity surrounding the Stennis, there was no discernible reaction to the protest from the ship and sailors. Crewmembers wearing white uniforms stood at parade rest around the edges of the 4.5-acre flight deck as the ship dropped anchor.

Spokesman Lt. Corey Barker said Saturday was the first time the Stennis has seen any protesters while deployed.

&#8220;The demonstrators are expressing their right of free speech, which is guaranteed them in a free society. The U.S. Navy and the JMSDF (Japan Maritime Self-Defense Force) serve to protect those very freedoms,&#8221; Barker said.

The less-than-cordial greeting in the harbor seems to have done little to dampen the crew&#8217;s excitement about the port visit.

&#8220;For many, including myself, this will be our first visit to this part of Japan. We have heard nothing but wonderful things about the warm hospitality, rich history and vibrant culture associated with Sasebo City and Nagasaki Prefecture,&#8221; Buss said.

The Stennis will remain anchored in Sasebo through Tuesday; none of the ship berthing areas along the India Basin is suitable for an aircraft carrier.

The protest organizers &#8212; leaders from the Social Democratic Party of Japan and Peace Action Center of Nagasaki &#8212; believe the Stennis port call, considered with the Lincoln&#8217;s 2002 visit, points to the U.S. Navy planning the permanent basing of a nuclear aircraft carrier in Japan after the USS Kitty Hawk is decommissioned in 2008.

Cmdr. John Wallach, spokesman for Commander, U.S. Naval Forces Japan, wrote Friday in response to a Stars and Stripes query that there is no decision about the location of a nuclear-powered carrier in Japan.

&#8220;No final decisions have been made regarding the replacement of USS Kitty Hawk. The U.S. Navy routinely evaluates options regarding assignments for Pacific Fleet ships, including forward deployed naval forces,&#8221; he stated.

The San Diego based-aircraft carrier, along with Carrier Air Wing Fourteen, the destroyer USS Howard and the replenishment ship USNS Ranier are visiting Sasebo through Tuesday, and the frigate USS Ford is in port in Tokyo, according to CNFJ.

The purpose of the port visits, Navy officials say, is to allow the ships to replenish and conduct maintenance while giving crewmembers a chance to participate in friendship and goodwill activities.

Masato Shinozaki, one of the protest organizers, said he isn&#8217;t sure why the ship has a port call in Sasebo.

However, he said, Sasebo is not configured to handle an aircraft carrier. &#8220;Maybe it would be better if the ship went to port elsewhere, such as Pusan, South Korea, Hong Kong or the Philippines.&#8221; This leads him to believe there are &#8220;other reasons&#8221; for the visit, Shinozaki said, adding there would be other protests about the Stennis visit.

&#8220;One possible reason, as many say, is to show their presence to the people in Japan with the home port of a nuclear carrier in mind after the USS Kitty Hawk is retired in 2008. I can&#8217;t agree with that idea; I am against nuclear carriers because of safety reasons,&#8221; he said.

&#8220;[The ship] is no more dangerous than nuclear power plants, and there are so many safety precautions &#8230; and I understand about half of Japan is powered by those,&#8221;said Burks.