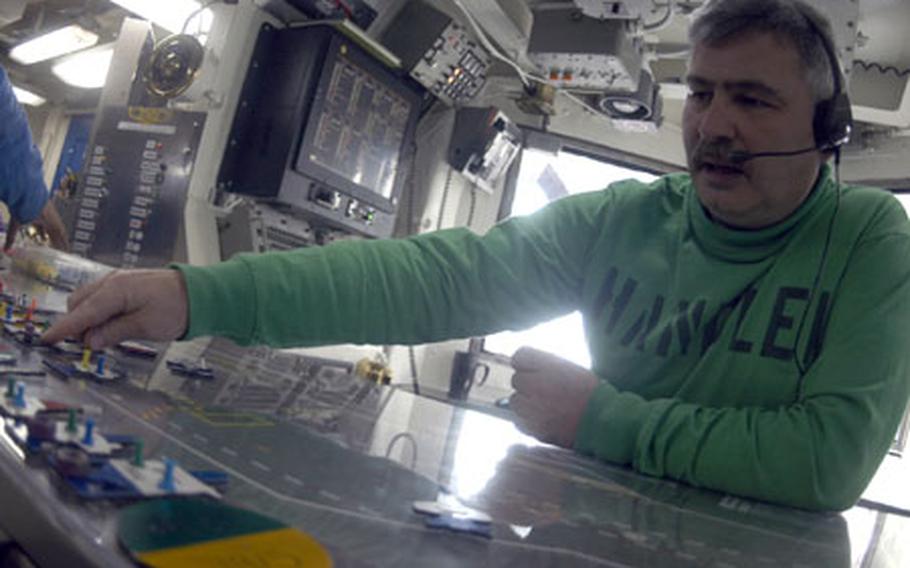 Lt. Cmdr. Doug Thornton, the "handler" or flight deck control officer, places shapes of aircraft on his "quigi board," mirroring the exact placement of real aircraft on the flight deck. The process, soon to be replaced by computers with touch-screens, provides a quick reference of the locations, fuel-level status, and availability of every one of the nearly 80 aircraft on the USS John C. Stennis. (Sandra Jontz / S&S)

Lt. Cmdr. Doug Thornton, the "handler" or flight deck control officer, places shapes of aircraft on his "quigi board," mirroring the exact placement of real aircraft on the flight deck. The process, soon to be replaced by computers with touch-screens, provides a quick reference of the locations, fuel-level status, and availability of every one of the nearly 80 aircraft on the USS John C. Stennis. (Sandra Jontz / S&S) An EA-6B Prowler comes in for a landing Saturday aboard the aircraft carrier USS John C. Stennis, sailing off the coast of Pakistan in the Arabian Sea. (Sandra Jontz / S&S) 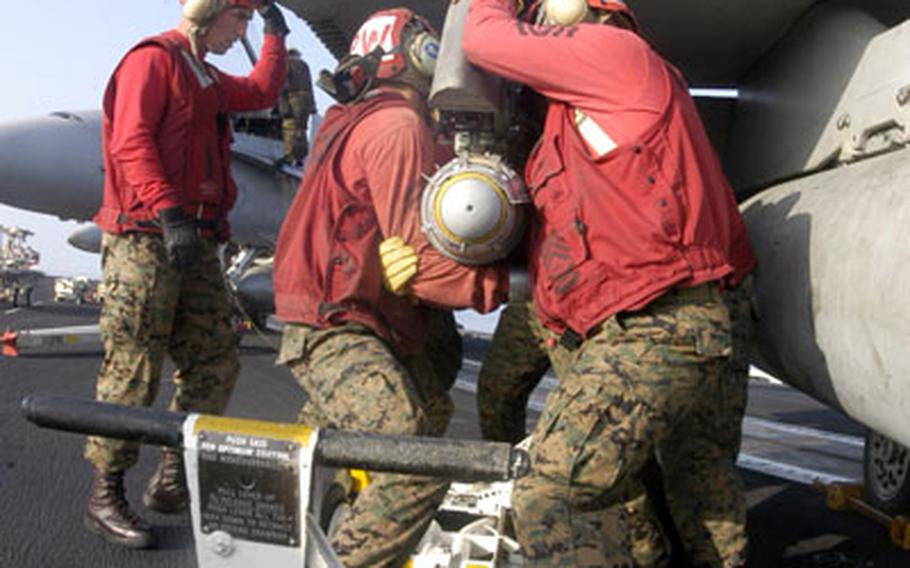 Marines with Marine Strike Fighter Squadron 323, the "Death Rattlers" out of Miramar, Calif., remove ordnance Saturday from an F/A-18 C Hornet, which had returned from providing close-air support to ground forces in Afghanistan. (Sandra Jontz / S&S)

ABOARD THE USS JOHN C. STENNIS &#8212; The aircraft carrier USS John C. Stennis bypassed routine port visits on its way to the Middle East this month, aiming to rapidly bolster U.S. carrier presence in a region whose instability is heightened by Iran&#8217;s pursuance of nuclear weapons.

For the first time since the 2003 invasion of Iraq, the U.S. Navy now has two carriers in the Middle East. But Iran is not the sole reason for the extra air and sea power, U.S. Navy leaders say.

&#8220;We consider this moment in time unprecedented in terms of the amount of insecurity and instability in the region,&#8221; Vice Adm. Patrick Walsh, commander of Naval Forces Central Command, told reporters during a Feb. 19 news conference. &#8220;So beginning in Somalia and working our way to Lebanon and the eastern Mediterranean as well as Afghanistan, Iraq &#8230; and with regard to Iran, there are unprecedented levels of instability in the region.&#8221;

The Stennis&#8217; Air Wing is in its first week of flying close-air support missions into Afghanistan, in addition to scouring the region&#8217;s waters for suspected weapons smugglers and pirates. The carrier, backed by a strike group, minesweepers and more than 6,500 sailors and Marines, arrived in the region Feb. 19.

The Stennis&#8217; arrival absorbs some of the strains placed on the USS Eisenhower and gives Navy leaders more options on the wars in Afghanistan or Iraq, maritime security operations, bilateral exercises and monitoring Somalia, said Navy Capt. Bradley Johanson, the Stennis&#8217; commander.

&#8220;The presence of two carriers &#8230; gives them more assets to spread evenly for the different missions,&#8221; Johanson said Saturday.

But the mounting tension between the United States and Iran isn&#8217;t taken lightly, Walsh said, according to a transcript of a Feb. 19 media session.

&#8220;Specifically, the concern with Iran is the combination of the rhetoric and the exercises has taken on a very bellicose and pugnacious tone,&#8221; he said of recent Iranian military exercises and talk of using mines in the Strait of Hormuz to stymie commercial traffic.

&#8220;What I have described to you are the episodes that have taken place over the course of the past few months, and the trend line with Iran is one that is very concerning and troubling.&#8221;

Johanson recognizes the strain that the mission &#8212; and lack of port visits thus far &#8212; has placed on his crew of roughly 5,000 sailors and Marines. And he hopes to give them a reprieve when the ship returns to its homeport of Bremerton, Wash., later this summer.

Next in line is the USS Nimitz.

He could not say whether the U.S. military intends to maintain a two-carrier presence.

&#8220;I think we would evaluate the situation at the time and see if it made sense to have an additional carrier here or not,&#8221; Walsh said.

A key mission of Carrier Air Wing 9 at the moment is to provide close air support for ground troops in Afghanistan, which taxes the crews.

Flying missions from the carrier, circling in the Arabian Sea south of Pakistan, then flying inland to Afghanistan, is a demanding, &#8220;long commute to work,&#8221; said Navy Capt. Sterling Gilliam, commander of the eight squadrons that make up Carrier Air Wing 9.