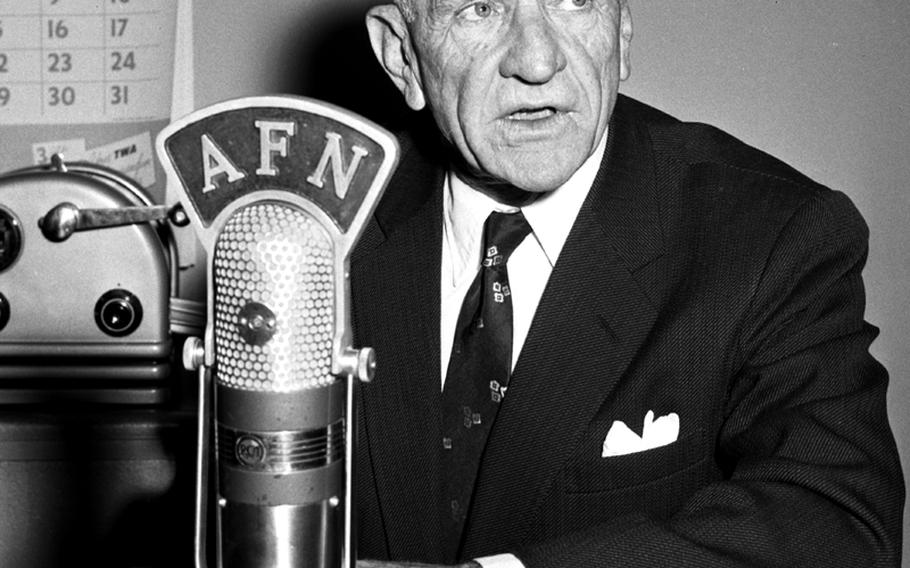 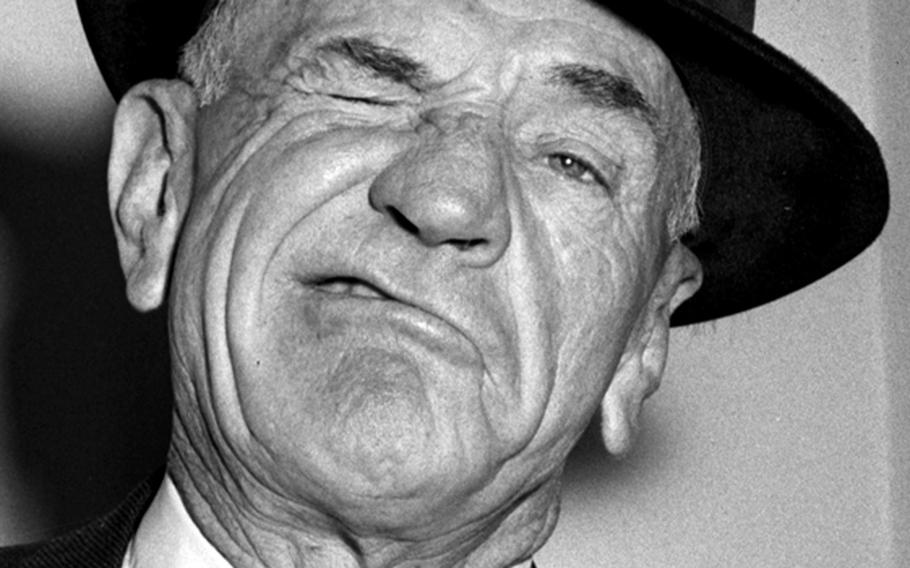 Buy Photo
Casey Stengel mugs for the camera in Germany in 1955. (Jim Black/Stars and Stripes) 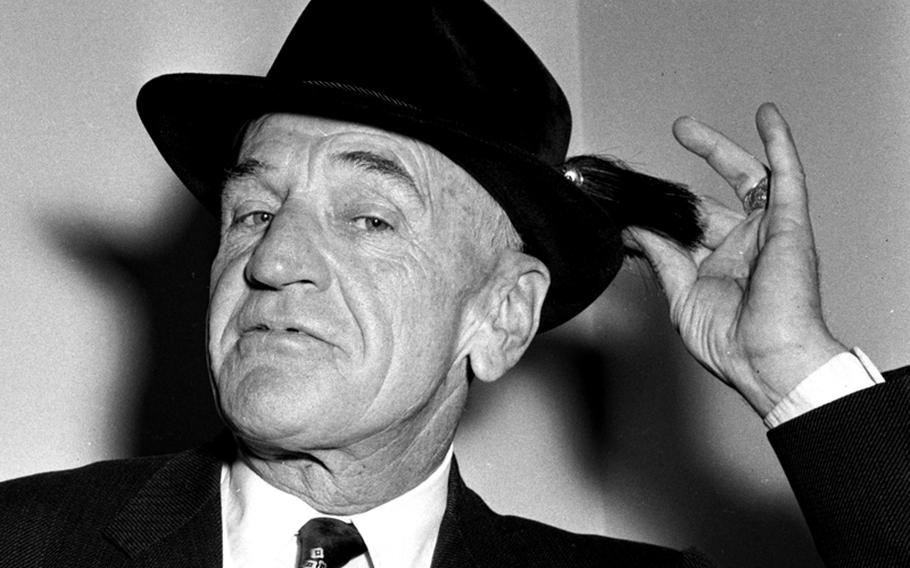 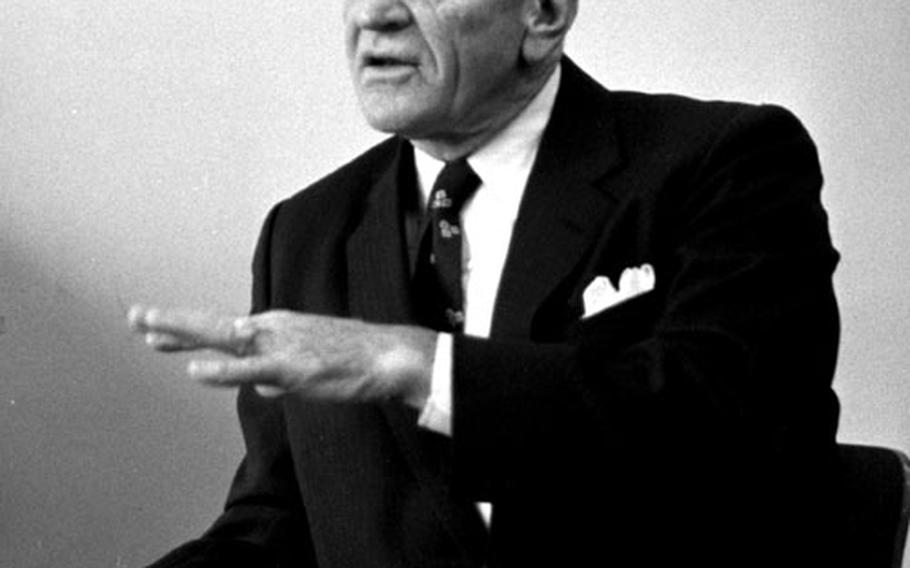 Buy Photo
Casey Stengel is interviewed in Germany in 1955. (Jim Black/Stars and Stripes)

Ebullient Charles Dillon (Casey) Stengel breezed in and out of Frankfurt the other day and discoursed on such topics as Japanese ball players, the World Series, the New York Yankees, service baseball, Little Leagues, and football — all interspersed with anecdotes gleaned from 45 years of playing and managing our National pastime.

The New York Yankee manager was on his way home after a round-the-world trip that started in Japan on a postseason exhibition tour with the American League champion Yankees.

Stengel, speaking with a sprightliness that belied his 64 summers, still hadn't gotten over that last game in which his fellers lost the World Series to the Brooklyn Dodgers.

"We had a couple of breaks go against us," Casey said, "but, you know, the truth of it was we just couldn't hit this (Johnny) Podres.

"Why, in the ninth inning that feller was throwing peas up there and our fellers just couldn't hit the ball."

Casey lapsed into his Stengelese in praising the Dodgers.

"That feller catching can hit the long ball. And the feller on shortstop always finds a way to get around the bases. Then the feller in center," Casey gestured. "You know in 1950 he hits us like he owns us. Then in 1953 we own him. But this year, he hit us when he needed it," Casey concluded.

In case you're wondering, that "feller"' catching was Roy Campanella, who won the National League Most Valuable Player award for the third time this year. The "feller" on shortstop was Pee Wee Reese, the peerless Dodger field captain, and Duke Snider, All star National League outfielder, was in centerfield.

But for the most part, the old professor of Yankee Stadium, dropped his words of praise and wisdom clearly and concisely.

He had high praise for the servicemen in Japan who aided the Yankees in their tour of the Far East.

"They learn to work with men and get along," Casey said, "And that's an important thing when you are building a winning club. Players can't be fighting each other and expect to win."

Casey wouldn't be pinned down on the American League race next year.

But he was emphatic that the Yankees are the champions and a good club. "We always come up with a feller when we need him," Casey grinned knowingly.

Queried about the rumored trade with Washington's Mickey McDermott. Casey shrugged it off to Chuck Dressen, Washington's freshman manager.

"Chuck is an aggressive and good manager," Casey said. "He wants a young club and he's willing to trade. We've got young ball players on the way up and maybe Chuck's trying to light a fire."

Asked about the Boston-Washington deal that sent Bob Porterfield and Mickey Vernon to the already strong Bosox club, Casey said he expected the trade would help Boston.

"But we beat them last year, and we can beat them again," Stengel opined.

Ted Williams came in for some praise from Stengel.

"That Williams is a great hitter," Casey said slowly. "He's the best up there. Would I like to have him on my club? Well, let's say I could find a place for him if he came to the Yankees."

The Little Leagues drew praise from Stengel. The veteran manager said they might well be the salvation of baseball what with radio, TV and other attractions drawing the young players away from the game.

"You get a young kid out there playing baseball and his parents interested in the program, then you got a team that's hard to beat," Casey stated. "When the parents get out there and back the leagues, the kids will be out there playing and learning."

It seems like Casey has been either playing or managing all his life. He was 19 years old back in 1910 when broke in with Kankakee of the Northern Association as an outfielder, a position he was to play for the next 21 years.

Two years later Casey was in Brooklyn and in 1918 was traded to Pittsburgh for Burleigh Grimes. The next year he was traded to Philadelphia and in midseason of 1921 was sent to New York Giants for a then costly sum of $75,000 in ball players.

In 1924 Casey went to the old Boston Braves and the next year he went to Worcester of the Eastern League as a player-manager.

Except for a two-year stint as a coach with Brooklyn and one year, 1937, when he sat out a season — with pay — Casey has been masterminding young ball players in the National and American leagues, American Association and Pacific Coast League.

Casey continued as an active player-manager right up to 1931 with Toledo in the American Association and finished with a lifetime batting average of .284.

Over the years, Casey built himself quite a reputation as a gagster who just couldn't take life too serious.

Like the time he came to bat against the Giants and doffed his hat to the booing crowd. When Casey lifted his cap, a bird flew out and the crowd howled and loved it.

But when the chips were down, Casey was quite a ball player. Like the 1923 World Series when Casey slammed two home runs, each winning a game, and hit for a mere .417 in six games.

Incidentally, Casey's home runs in the 1923 Series beat a team called the New York Yankees — the team that Casey was to reach managerial greatness with 25 years later.

For 20 years Casey toiled as a manager in the majors and minors winning only three pennants — Toledo, in 1927, Milwaukee, 1944, and Oakland, Pacific Coast League, 1948.

Success was a long time in coming but when it came it just wouldn't stop.

In 1949 Stengel took over the New York Yankees, the "other" league throughout his long major league span.

And for five straight years, Casey piloted the pin-striped gentlemen from Ruthville to the American League pennant and the world championship.

He stumbled in 1954, losing to Cleveland, but last season he picked up the trail again to capture the American League pennant although he bowed to the Dodgers in the seventh and final game of the World Series.

"Man and boy, I've been playing or managing for 45 years and I lost," Casey said. "No good ball player likes to lose a game — any game — but when you lose that big game, it's tough to forget."

Comes the 1956 season and we are sure that Stengel won't be forgetting that last game, and all he and the Yankees want is a chance to get even.

Their records say they will.