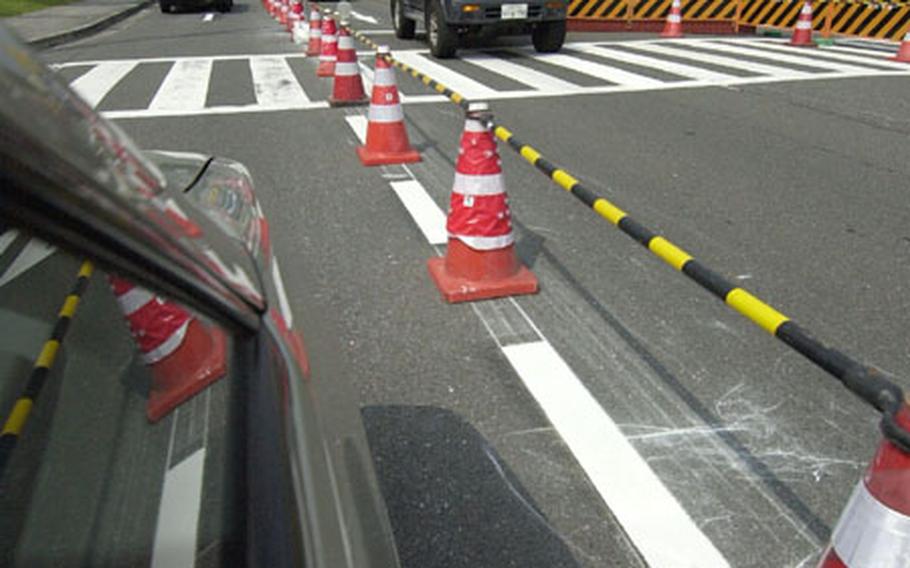 Yokota Air Base has reduced traffic to two lanes on Airlift Avenue from the 374th Airlift Wing Headquarters to the Main Gym due to an upgrade of the base steam pipes under the roads. (Jim Schulz / S&S)

YOKOTA AIR BASE, Japan &#8212; Traffic will be a little cramped along Yokota&#8217;s main drag during the next seven months.

A section of Airlift Avenue, from Friendship Boulevard near Building 314 to the Main Fitness Center, has been reduced to two lanes so workers can replace underground steam lines used for heating and cooling elements in the surrounding facilities. The $51 million project is expected to be complete in early April.

Last year, Airlift Avenue was shut down just north of that area for several months as contractors installed a new steam plant. That plant has been online for at least two months, said Raymond Kishaba, resident engineer for the U.S. Army Corps of Engineers Japan District.

Motorists were directed around that construction via Davis Street, which they&#8217;ll now have to use to access parking lots for Building 314 and 316, said Hernandez. Those buildings sandwich the 374th Airlift Wing&#8217;s headquarters.

People headed to the Child Development Center behind the main gym, which is also being renovated, must take Davis Street. Workers are placing manholes at the intersection of Airlift Avenue and the access road to the CDC, so it had to be sealed off, Kishaba said.

The current steam lines are decades old, according to Hernandez.

Steam is used in heating elements for many buildings in the winter, Hernandez said. And absorption chillers use steam to cool facilities down in summertime.

All Airlift Avenue buildings will &#8220;be affected by the new steam lines," Kishaba added.

The Airlift Avenue replacement is part of a base-wide steam infrastructure upgrade effort, Hernandez said. When complete, Yokota will have core steam-generation plants for the west, east and central areas.

It&#8217;s a massive project costing hundreds of millions of dollars and covering many years, he said. And the government of Japan pays the tab.

&#8220;The Japanese government helps us to infuse resources into the infrastructure here,&#8221; Hernandez said. &#8220;As far as facilities at Yokota, they make it very easy for us to maintain. That&#8217;s a nice thing to have.

&#8220;Other bases back in the States have problems we don&#8217;t have here. That reduces the number of maintenance calls we get here at night. Some bases have full-time people to take those calls. We don&#8217;t have to. Our base runs pretty smoothly. The Japanese government takes such good care of us."

YOKOTA AIR BASE, Japan &#8212; Base officials are resurfacing Bobzien Avenue on Yokota&#8217;s west side from Highway 16 gate to Kearby Court, just across the railroad tracks.

The project requires coordination between Yokota personnel, Fussa City police and local government officials, he added. Most of the work is performed between 8 p.m. and 4 a.m.

Contractors aren&#8217;t allowed to approach the train tracks that intersect Bobzien Avenue until 10 p.m., when a Japan Railway representative must be present to observe.

The Jones Street extension has been resurfaced from Bobzien Avenue to the Air Mobility Command&#8217;s temporary passenger terminal, Starnes said.

The repaving of Bobzien Avenue should be finished by the end of November, he added, although it could last into the new year.

Seikitokyu Kogyu Company Ltd. has been contracted for all of Yokota&#8217;s resurfacing projects, which include efforts under way at the base incinerator and Tama Hills Golf Course parking lot.

Collectively, Yokota is spending about $6 million to $8 million to improve roads and parking lots, Starnes said.