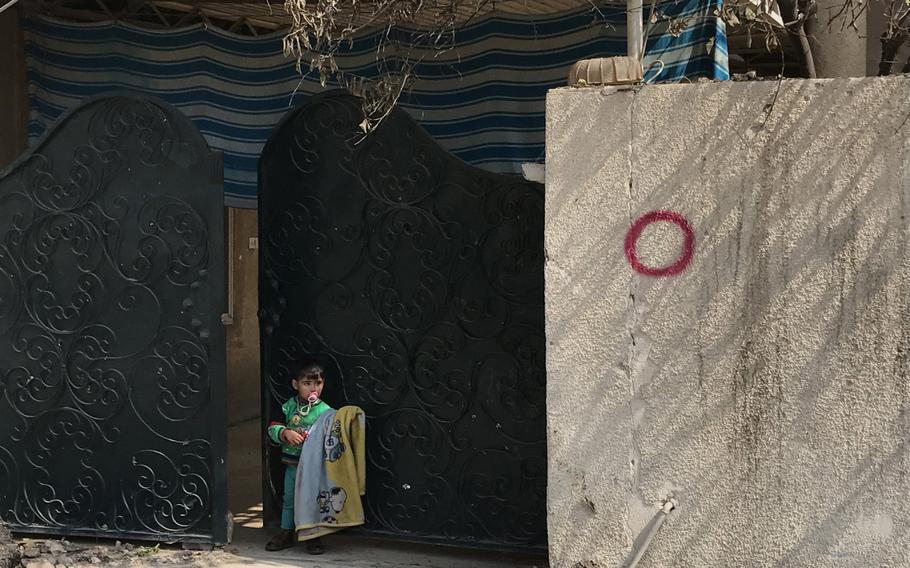 Buy Photo
A child stands in front of a driveway gate at a home in the al-Dandan neighborhood of Mosul on Wednesday, March 8, 2017. The red circle on the wall marked the house as having a covered driveway suitable for concealing an Islamic State car bomb, residents say. (Chad Garland/Stars and Stripes)

Buy Photo
A child stands in front of a driveway gate at a home in the al-Dandan neighborhood of Mosul on Wednesday, March 8, 2017. The red circle on the wall marked the house as having a covered driveway suitable for concealing an Islamic State car bomb, residents say. (Chad Garland/Stars and Stripes) 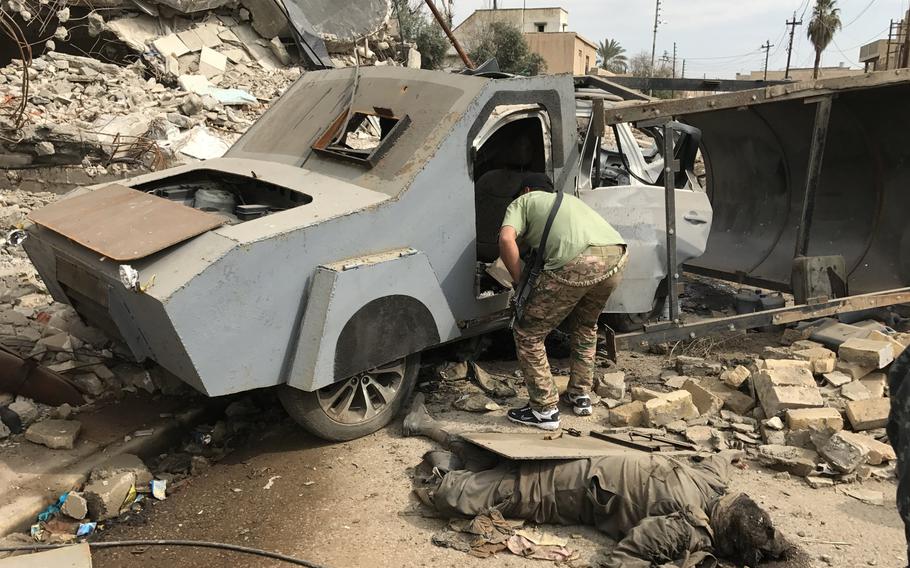 Buy Photo
An Iraqi soldier peeks inside an up-armored car bomb on a street in a Mosul neighborhood on Wednesday, March 8, 2017. Iraqi forces stopped the suicide bomber, dead on the ground, before he had a chance to detonate his deadly SUV. (Chad Garland/Stars and Stripes) 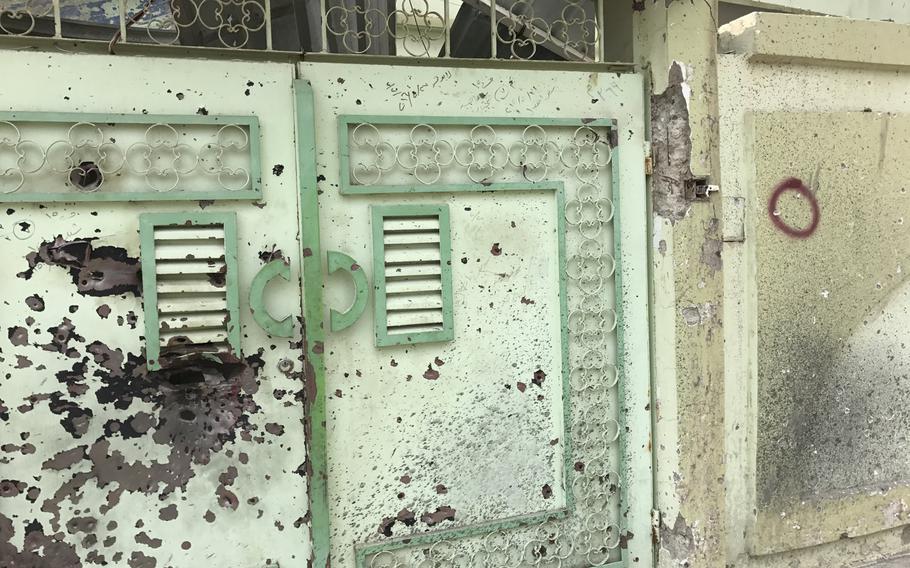 Buy Photo
Pictured here is the front gate of a home in the al-Dandan neighborhood, damaged by fragments from an apparent bomb blast, on Wednesday, March 8, 2017. The red circle on the wall marks the driveway as suitable for concealing an Islamic State car bomb. (Chad Garland/Stars and Stripes) 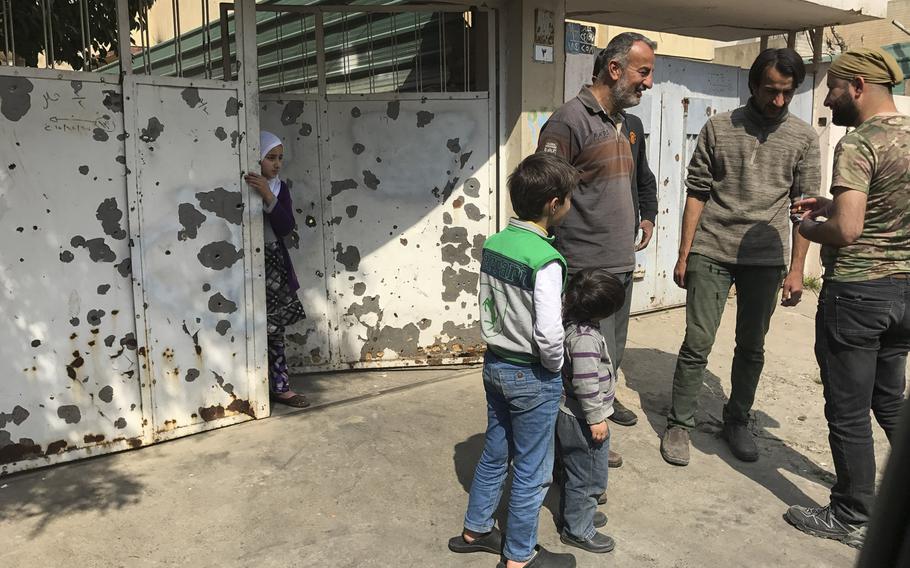 Buy Photo
A girl looks on from a gate as men talk in a neighborhood in western Mosul on Wednesday, March 10, 2017. (Chad Garland/Stars and Stripes) 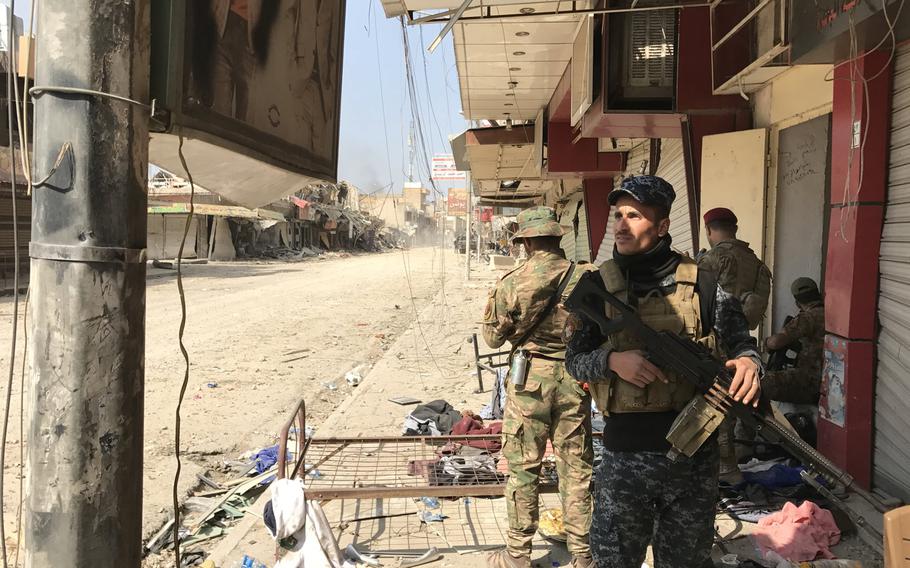 Buy Photo
An Iraqi federal police officer stands watch on a street in central Mosul on Wednesday, March 8, 2017. The police and a special operations unit called the emergency response division were working to clear western Mosul neighborhoods close to the Tigris River, while other Iraqi forces were fighting Islamic State farther to the west. (Chad Garland/Stars and Stripes) 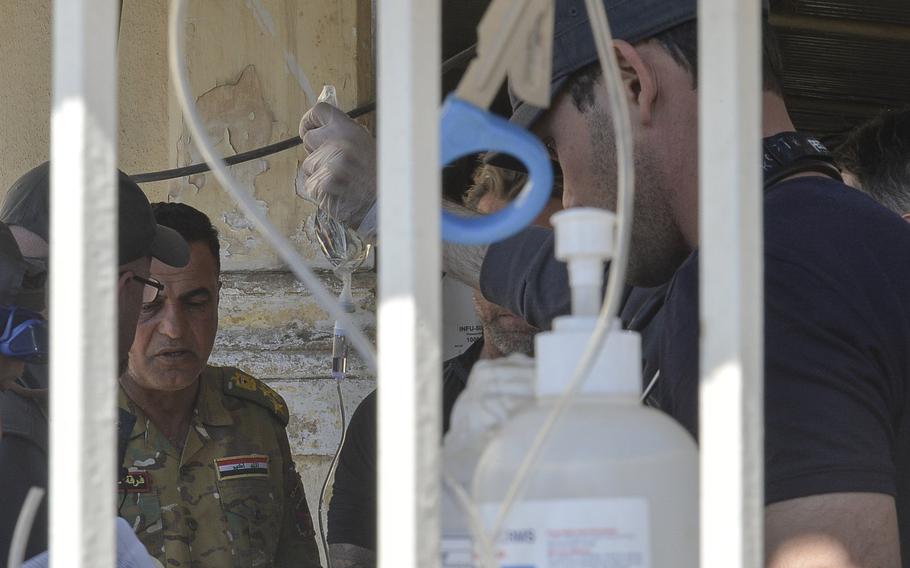 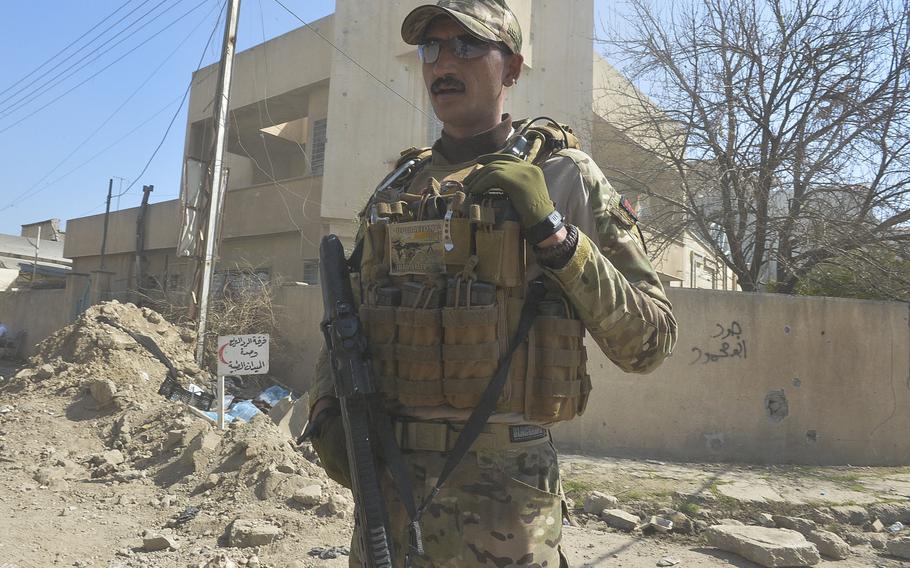 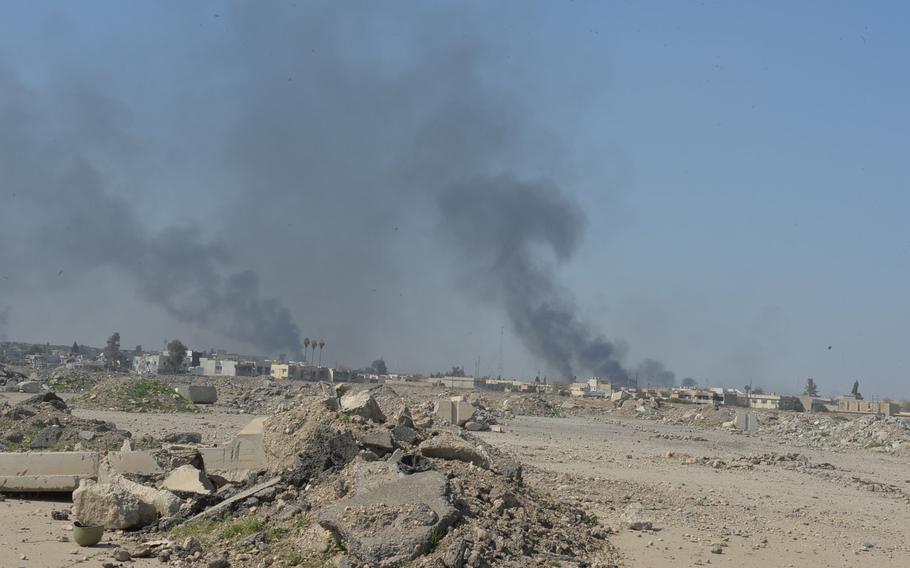 Buy Photo
Columns of smoke rise from western Mosul, north of the city's airport, on Thursday, March 9, 2017. Islamic State fighters use the smoke to ward off airstrikes and surveillance aircraft as they fight to repel Iraqi forces closing in on their positions in the city, Iraq's second largest and the Islamist group's last major stronghold in the country. (Chad Garland/Stars and Stripes) 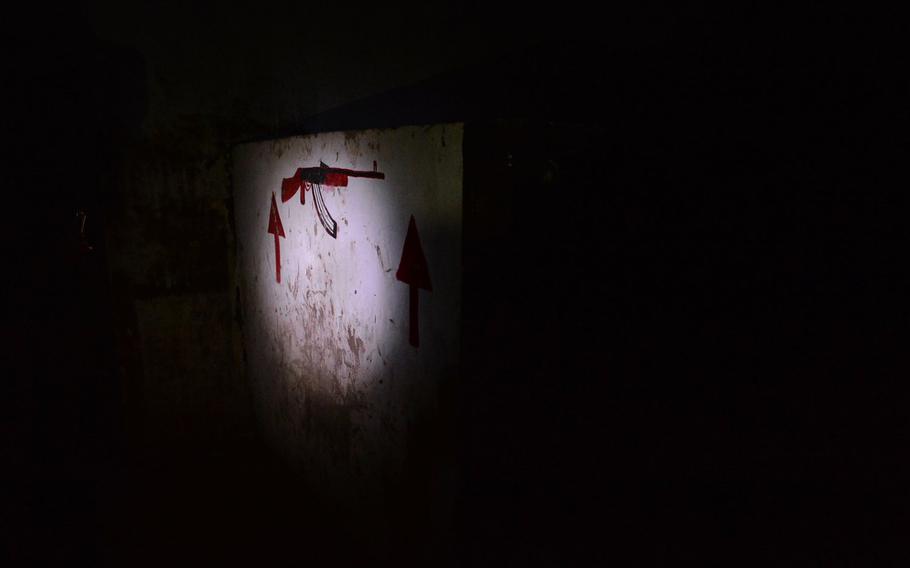 Buy Photo
A wall obstacle in an underground Islamic State training camp in a railway tunnel is pictured here, Thursday, March 9, 2017. Iraqi forces uncovered the training base near Albu Saif as they pushed toward western Mosul in February in the campaign to retake the city's west side from the militants, who have occupied it since 2014. (Chad Garland/Stars and Stripes) 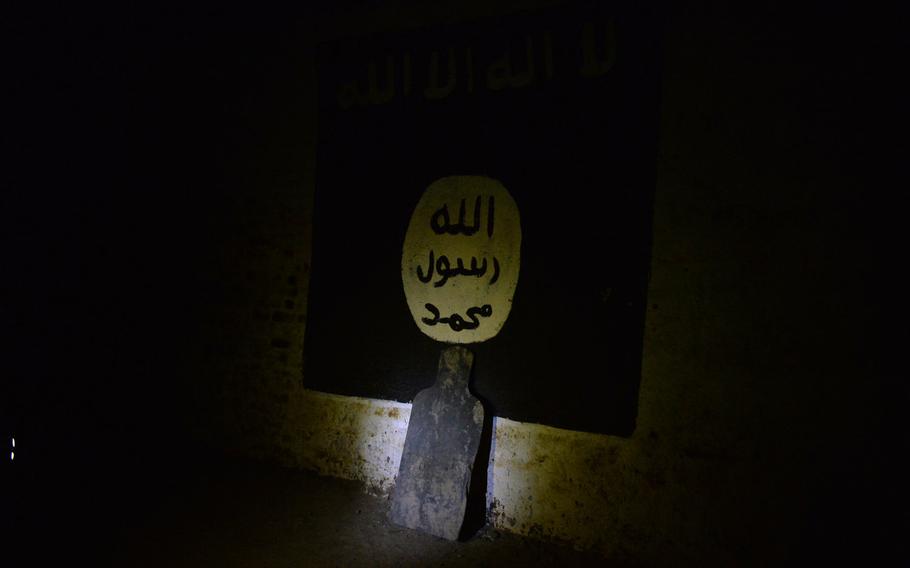 Buy Photo
Pictured here on Thursday, March 9, 2017, a marksmanship target leans against a painting of the Islamic State flag on the wall of a railway tunnel that the Islamic State group turned into a covert training base. (Chad Garland/Stars and Stripes)

MOSUL, Iraq — The houses here are marked with sinister intent.

Throughout northern Iraq, in areas the Islamic State group seized more than two years ago, houses have been tagged with graffiti symbols to indicate if the owner was Christian or Shiite or to claim the property for the Sunni extremist group.

But in the al-Dandan neighborhood of Mosul, near the city’s southernmost bridge, a red circle spray-painted near the front gate means the covered driveway could be used to hide a car bomb from overhead observation.

It’s one of many ways Islamic State militants have sought to use stealth to counter the sophisticated surveillance and strike capabilities the U.S.-led coalition is providing to aid the Iraqis.

As fighting began to the city’s east and south in October, the jihadis burned oil and tires to create smoke screens. Iraqi forces uncovered underground tunnels and found rows of adjacent homes with the walls broken down to allow fighters to slip unseen from house to house.

During the latest push north in Mosul’s west side, which began in February, Iraqi forces south of the city discovered an entire extremist training camp built inside a more than milelong railroad tunnel, with an obstacle course, a firing range, a mosque and a clinic inside.

Now, as the battle continues into the city’s center, the militants may be using tarps stretched across the narrow streets of the Old Town to conceal mortar positions from aerial surveillance.

“They pull the tarp away to fire a mortar, then pull it closed,” said Sgt. Alaa Hassan, a soldier with Iraq’s emergency response division, who accompanied reporters this week.

Some higher-ranking officers in the elite unit disputed that claim.

“They burn a lot of tires and black oil,” said Brig. Gen. Abbas al-Jabouri, but they’re not hiding under tarps.

In al-Dandan, Islamic State militants forced residents to pull their cars out of their driveways and into the streets to block the road, said a man who gave his name as Abu Akhmed, an alias, because he feared reprisal. In some cases, those vehicles have reportedly been packed with explosives or set on fire to slow the Iraqi advance.

Akhmed’s Toyota is now one of several husks of rusting metal cluttering a crater from a coalition airstrike to destroy the roadblock just outside the gate of his home, where he lives with his wife, two sons and their wives.

“I saw hell,” he said of the airstrike, saying he hopes the Americans won’t hit near his home again. “Please, Trump — please, no.”

He hasn’t fled, unlike tens of thousands of other Mosul residents. That’s because he thinks they’re safer in their home than in a camp for displaced people, though bombs continued to explode nearby Wednesday, many of them apparently hidden in homes and cars.

Standing outside his front gate, Akhmed flinched with each blast. He looked around for his sons, tensing in preparation to sprint to them or back into their home.

At one point, a blast went off so close that fragments rained into the street. It was a house bomb, Hassan said, judging by the greenish smoke.

Car bombs are apparently being packed with jugs of oil to make the explosions burn longer and to send up columns of thick black smoke.

In one neighborhood near the Mosul airport, a suicide bomber lay dead in the street next to a cluster of oil jugs and an up-armored KIA Santa Fe. Iraqi forces killed him earlier in the week before he could set off his deadly SUV.

Mortars give off black smoke, Hassan said, unless they’re armed with chemical weapons, which put out yellow clouds. Several civilians in Mosul have been wounded in chemical attacks in recent days, humanitarian organizations have said.

Not far from Akhmed’s neighborhood, U.S. volunteer medics treated a man for apparent chlorine gas exposure this week. Their clinic is undercover, too, in the carport of a recaptured home north of the Mosul airport.

Al-Jabouri said the militants use the black smoke to ward off U.S. strikes, which he said have killed more than 500 Islamic State fighters. There were an estimated 2,500 fighters left in the city when Iraqi forces began their push into western Mosul, on what the Iraqis call the “right bank” of the Tigris.

As they move further into the city, Iraqi forces have switched their tactics, operating at night to cover their movements and to surprise their enemy.

But one such raid on Tuesday, to retake a government complex, turned into a deadly trap as Islamic State militants from hidden sniper positions fired on Iraqi forces, and previously concealed car bombs rammed their convoys, The Associated Press reported.

Still, al-Jabouri said the mission was a success, with more than 30 militants killed. He said his forces liberated the government complex, a police station, a museum and a courthouse.

“We liberated [them],” he said. “With American support, we succeeded.”