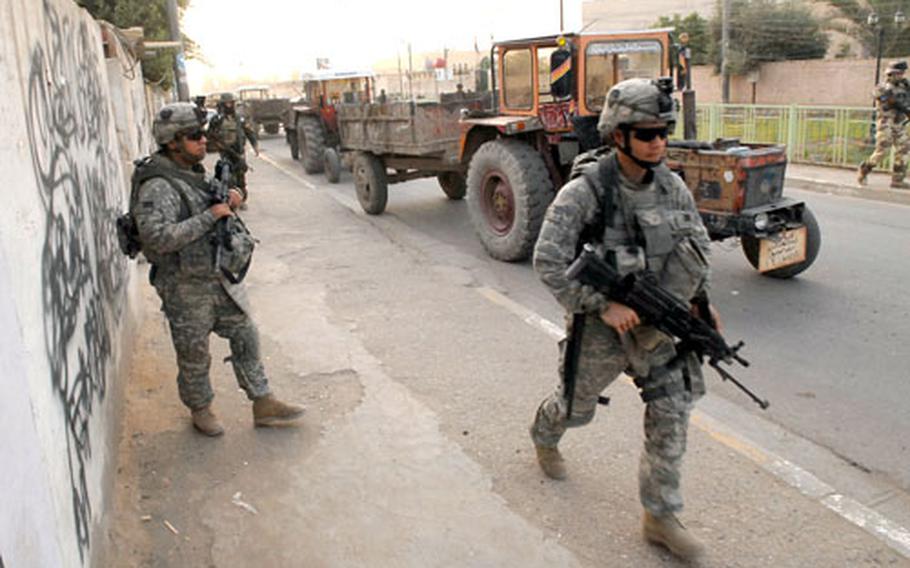 Soldiers from Company B, 1st Battalion, 502d Infantry Regiment patrol through the early morning streets of Shula on the way to the site of a supposed weapons cache. Commanders say such tips have started to decline, which they attribute to the subsiding presence of militias in the area. (Michael Gisick / S&S)

But when they arrive, sweating, at the site of a reported arms cache, they find that the site has already been searched twice by American troops in recent days.

"Man, this is getting old," says Staff Sgt. William Moulds, the patrol&#8217;s leader. Moulds tells the owner of the property that it would "behoove" him to find out who keeps calling in tips against him.

As they sift through the aftermath of fighting this spring, U.S. troops in northwestern Baghdad continue to follow a steady stream of tips on weapons caches and militia leaders. Many lead nowhere.

When the fighting &#8212; which tapered off in April and all but ended in early May &#8212; was still going on, U.S. troops often fielded tips that required an immediate response, said Capt. Jeremy Ussery, commander of Company B, 1st Battalion, 502nd Infantry Regiment.

"If we got a report that we were about to get hit with RPGs, that meant you better duck," he said. "But it&#8217;s started to taper off. A lot of the leaders have left."

Still, companies continue to get hot intelligence. One day late last month, a boy on a bicycle arrived at the company&#8217;s main security station and reported seeing a "weird truck" in a nearby neighborhood, Ussery said.

Soldiers investigated and found the truck loaded with improvised rockets, or so-called "lob bombs," capable of heaving heavy explosive charges a few hundred feet through the air. Such rocket launchers were used extensively to bomb U.S. bases in eastern Baghdad this spring, but it was the first time one of the devices has been found in western Baghdad, Ussery said.

More typical was a U.S. search of schools in the Hurriyah neighborhood days after a truck bomb at a market killed 63 people. The search turned up a single AK and a blackened RPG launcher that appeared to have been burned.

An Iraqi family worked on renovations in the school and, as the search wound down, the soldiers posed for photographs with the family&#8217;s children.