Staying sane while a loved one deploys 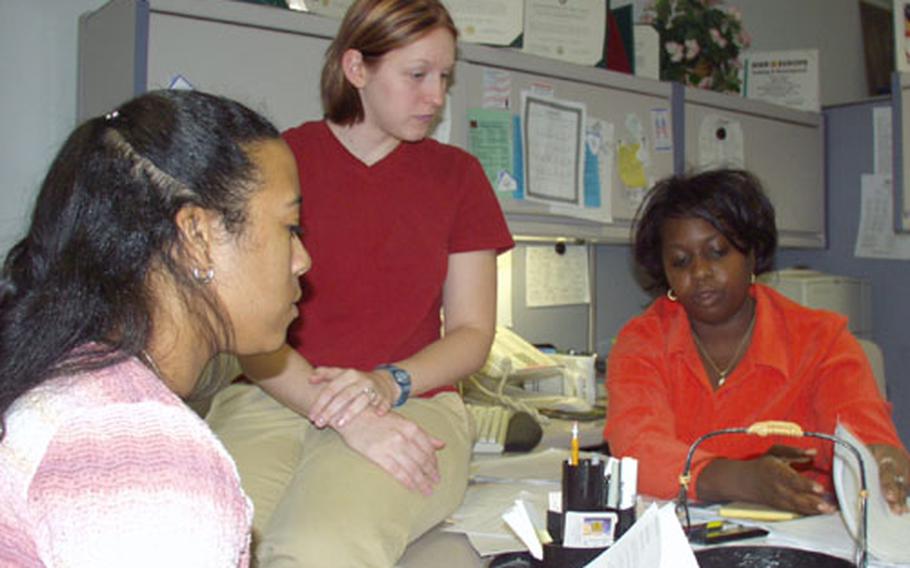 Army spouses, with different backgrounds and experience levels, learn how to deal with long deployments from leaning on each other during tough times, while gaining strength to do things on their own. Talia Hickson, at left, Stephanie Kercheval, and Melissa Smith, all from Darmstadt, Germany, have helped one another better deal with loneliness by offering support and comic relief. (Jessica Iñigo / S&S)

Army spouses, with different backgrounds and experience levels, learn how to deal with long deployments from leaning on each other during tough times, while gaining strength to do things on their own. Talia Hickson, at left, Stephanie Kercheval, and Melissa Smith, all from Darmstadt, Germany, have helped one another better deal with loneliness by offering support and comic relief. (Jessica Iñigo / S&S) 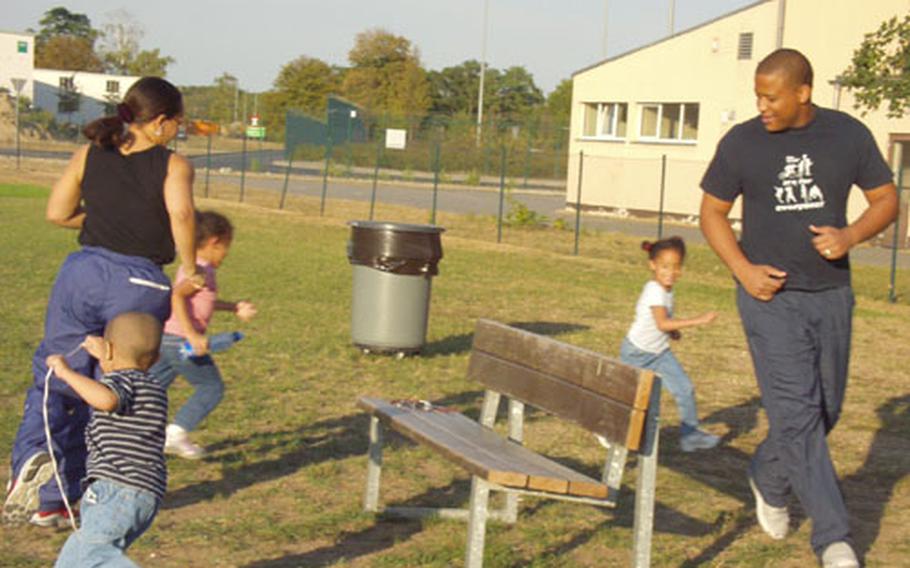 The White family, playing a game of chase on the sports field on Rhein-Main Air Base. (Jessica Iñigo / S&S)

For every marriage there is a time of happiness and a time of anger, moments of jealousy and moments of pure love, and longing for more or a wishing for less.

In a military marriage all these feelings could be felt almost at the same time, and without a spouse to tough it out.

With yearly deployments on the map for many servicemembers in Europe, emotions are running high across communities, and many feelings are left to simmer rather than be released.

Military wives are learning the ropes of managing a household and their lives when left solo, and many have said they have even turned their lives around during a long deployment.

Stephanie Kercheval, for example, said she realized lying in bed and crying under the covers wasn&#8217;t getting her new marriage or herself anywhere.

Once the shy housewife stepped out into the Darmstadt, Germany, job market and learned from example, she said, she started shaping up.

Melissa Smith, boss and mentor at the Darmstadt Army Community Service center, learned how to do it way back when and read Kercheval the riot act before she fell too low in her slump.

Smith has stood as an example for many military wives, being a veteran of the service as well as a military spouse and mother.

Patience is exactly what others say gets them through military uncertainties.

Crystal White and her four children have been sitting at the edge of their seats for over a month while their Air Force dad remains on alert to deploy to the Middle East.

With an on-again, off- again schedule, the White family is concerned the waiting will get to them much more than the deployment.

With a 4-year-old boy, a set of 5-year-old twin girls and a 13-year-old daughter, White already has her hands full, but she also teaches youth gymnastics and cheer at the fitness center on Rhein-Main Air Base, Germany, while &#8220;daddy goes off to save the world.&#8221;

She plans to juggle everything with preparation, she said.

This preparation and patience with the military is key to keeping sane during deployments, according to Smith.

She also said people should have something to lean on during tough times.

Smith said she has received a lot of strength from attending Family Readiness Group meetings and deployment updates, but others say their strength comes from within.

Talai Hickson used the support she had for her husband and the military to get herself through the long months, instead of depending on an FRG.

Her husband, Staff Sgt. Kenneth Hickson of Company C, 440th Signal Battalion out of Darmstadt, now receives tons of care packages, because that&#8217;s what makes Hickson feel as if he&#8217;s closer to home.

Hickson can&#8217;t receive updates on how her husband&#8217;s unit is doing since he is attached to a Marine unit.

Trust goes a long way in other aspects of deployments, as well, though some wives think keeping some facts to themselves may actually be better in the long run.

&#8220;Now, it&#8217;s not like I keep secrets from him, but I limit some of the things I tell him, just so he&#39;s doing better and not worrying about me.&#8221; Kercheval added that she feels more independent now that she has more friends and is involved in the community.

Smith agrees, saying she not only has to do it for her husband, but for her two daughters, as well.

Smoothing stress levels of everyone involved in a deployment can be the best medicine, every spouse said, while getting out and finding their own personal niche is the best relief.

And when times really get tough, spouses curb elevated emotions by calling in reinforcement strength gained from each other.

It&#8217;s tough being ma and pa when servicemembers deploy, and there&#8217;s not always a silver lining around those clouds.

&#8220;It really takes a special person to be a military spouse,&#8221; Melissa Smith said. &#8220;Not everyone could deal with the major deployments and the back-to-back rotations with children and the home front to watch.&#8221;

Her husband, Sgt. 1st Class Alton Smith of Company B, 440th Signal Battalion from Darmstadt, Germany, suffered a blow during his deployment when he had to come home for emergency leave due to a death in the family.

&#8220;It was good and bad. I loved seeing him, but the reason for the visit and the upset to the children took a toll on the entire family,&#8221; Smith said.

Now the Smiths are gearing up for another family upset.

They are making a military move to Georgia and Smith said she fears he will be sent directly out to Iraq in support of his new unit, leaving her to set up their new home alone.

Though she may not always like the distance, she said she understands his mission is important.

Tough times not only gather around families with children. Thalia Hickson, who has been married for five years, said when her husband was first deployed she overcame the blues in a not so healthy way.

All she thought she needed was to get out of the house, but she soon learned these outings needed to be more productive.

In fact, she needed a good job.

For a while, Hickson said she began shopping and hanging out with friends too much.

Now, as the Family Advocacy Program assistant in Darmstadt, she said she feels better about herself.

To feel better about the long deployment, she said she simply pretends it&#8217;s much shorter.

She said she tricked herself into making it easier by sticking with six months, then starting over when one set of six months were over.