Staying one step ahead 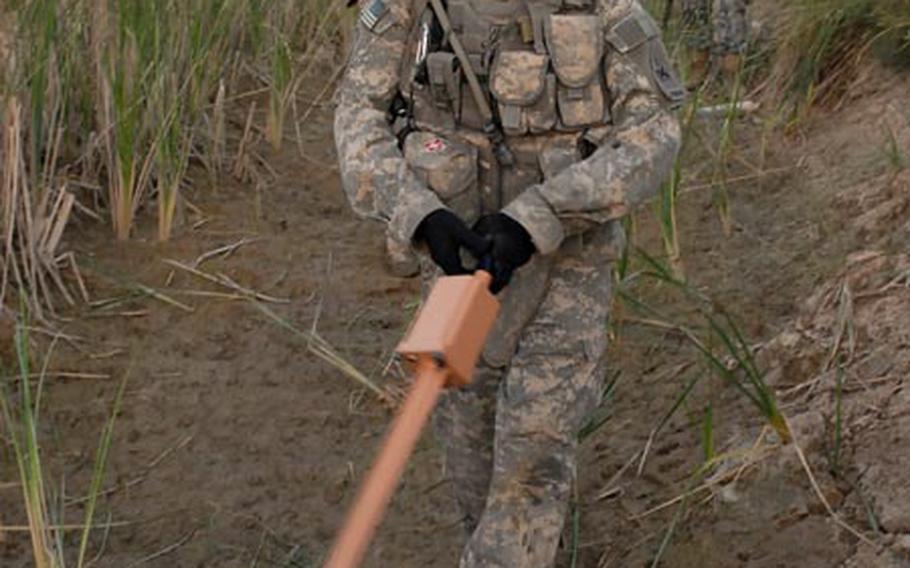 Spc. Tiburcio Bazante sweeps a mine detector through a muddy canal Friday during a search for weapons caches near Al Batta, Iraq. (James Warden / S&S)

AL BATTA, Iraq &#8212; Spc. Tiburcio Bazante sank ankle-deep into the mud with each step he took.

The Baumholder, Germany-based soldier waved a metal detector in front of him, searching for weapons caches hidden along the side of a canal near Al Batta, Iraq. The device kept up a steady chatter but didn&#8217;t get excited about anything other than an occasional chunk of twisted metal.

Fellow soldiers from Company A, 1st Battalion, 35th Armor Regiment eventually took Bazante&#8217;s place, waving the mine sweeper over the muck. But they, too, muddied their feet without success. After hours of searching on Friday, the soldiers retired to their base, having uncovered only a few empty weapons tubes and various pieces of spent ordnance.

Al Batta and neighboring Al Hymidat lie in an agricultural area just southeast of Baghdad. They&#8217;re also near the border of Diyala province, where the Iraqi and American forces launched a major operation at the end of July. That would have normally made the area a prime location for insurgents, but this area has so far remained quiet because the Al Batta area got a jump on the trend, as the soldiers&#8217; search Friday showed.

Units have long played a deadly game of Whac-A-Mole with enemy fighters. Coalition forces would launch an offensive in a troubled spot; insurgents would flee to a quieter area, forcing other units to chase them down and begin the process anew.

Insurgent activity here prior to the Diyala operation may have inadvertently helped 1/35 leaders buck this trend. They noticed an increasing number of roadside bombs in the Al Batta area, probably aimed at keeping coalition forces out of the region, said Capt. Jamal Williams, Company A commander.

But coalition forces swept through the area in June &#8212; a month before the Diyala offensive kicked off &#8212; and built up Patrol Base Jaguar to house an Iraqi National Police unit. Those National Police got in the communities and started working with the people, including local "Sons of Iraq" groups. When it came time for insurgents to flee Diyala, they would have found a strong presence here already waiting for them.

"It was a huge joint effort," Williams said. "That was why we have not had a dramatic increase after Iron Pursuit [the Diyala operation]."

Lt. Col. Rich Morales, the 1/35 commander, said there has still been an uptick in activity, seen in increased numbers of weapons caches and roadside bombs. Company A&#8217;s search Friday morning was part of just such a plan "making sure we&#8217;re not a support zone for those guys," he said.

But the effect so far appears too small for ground-level soldiers to see. Staff Sgt. Dehan Aquino, a Company A soldier, said the area is pretty safe and that he hadn&#8217;t seen any increasing activity. Other soldiers said they hadn&#8217;t seen much difference either. Aquino talked more about working with his unit&#8217;s Iraqi National Police partner.

"We gotta teach them the way so we can get out of here," he said.

First Lt. Slade Thorpe agreed that he hadn&#8217;t seen any increase in activity. Their work beginning last June has created a buffer zone that makes it difficult for insurgents to operate.

He said he can already see the difference.

In the past, Al Batta residents would pretend that everything was just fine &#8212; either too afraid or just unwilling to receive American help. Now they happily tell the Americans about their problems.

"You can always tell things are good when people complain about stuff," he said.

But the Diyala operation was launched just a little more than a month ago, and soldiers there are still working to clear the area. Thorpe isn&#8217;t sure the area has totally escaped the old pattern.